Ben Neil took these photos, and says, "Here is the highly sought-after T98a 'granny gear' 6.34, with factory adapters that bolt it right into all CJ-2A, 3A and 3B flatfenders. 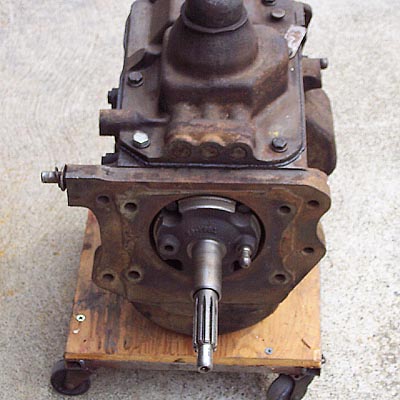 "This factory option T98a (top front view at left) was removed from a 1970 CJ-5 that had the 134 cu. in. F-head 4 cylinder. It was one of the last years Jeep offered a T98a, which began in the early 1960s. This one had a D20 transfer case with a single shift lever. Thetransfer case is 29 count spline, small hole.

"This last of the factory T98a's has a mixture of parts during the changeover to T18 transmissions. The shift tower is T18. If you have the option get one with the transmission support and driveshafts.

"Just as a footnote, this one was sold for $900.00, in my opinion a fair price. Aftermarket adapters are very expensive and longer than the 1-inch-thick cast iron factory pieces. Hope this will help the guys who are looking for one."

Bill Derkland grabbed some detail shots of the front of the transmission (90K JPEG) and a rear view (80K JPEG) to give a closer look at some of the details.
Eric Lawson has a T98a in an early CJ-5, and comments, "Somewhere I have a couple of adapters for the T-98 to 4F-134. One is cast iron and the other is aluminum. There is, I believe, another adapter that goes between the transfer case and the transmission.

"I have taken advantage of the really low gearing on several occasions. If I stall going up a steep hill, I can put it in 1st gear low range, leave it in gear and work the starter. Normally I would have to set the brake, get the clutch disengaged, get the engine started, work the parking brake, the throttle and the clutch without stalling the engine again or sliding backwards. The gearing is low enough that the engine will start and I will get going again without any sudden jerks or strains. 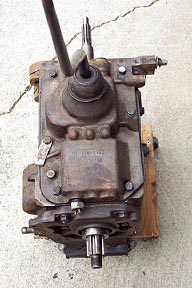 "The disadvantages to the transmission are the difficulty in finding parts, the shorter rear driveshaft and slightly reduced ground clearance.

"I haven't looked too hard, but I haven't had as easy a time finding the parts for the T-98 as I did for the T-90. I've been collecting parts for a rebuild. So far, all I have left is the input shaft for the 4F-134 engine, and I think a reverse idler gear.

"The T-98 (top rear view at right) is quite a bit longer than the T-90 and the drive shaft must be shortened to slightly less than 12 inches to fit. Short drive shafts are tougher on U-joints than are longer drive shafts.

"The T-98 is 'taller' and this reduces ground clearance by a couple of inches. This is right in the middle of the Jeep though, and I've not had any problems with this. There are some spacers that fit between the Jeep's frame and the transmission support/crossmember. The spacers are 3/4 inch thick, 4 7/16 inch long and 2 7/16 wide. The holes are not drilled along the centerline of the width of the wood, but instead are drilled so that the edge of the wood is flush with the outside of the frame. The wood then extends past the inside of the frame, but this part of the wood is protected by the crossmember.

"The other difference that I've noticed with the T-98-equipped CJ-5 is that the transfer case levers (I have the dual lever transfer case) are more straight than those used when a T-90 transmission is installed. Also, the sheet metal making up the cover over the transmission is quite a bit different from a normal T-90-equipped Jeep.

"On my CJ-5, the frame already has holes drilled in place so that either transmission can be placed into the frame. Also, the ball stud that the clutch tube rotates on is mounted to the T-98 transmission-to-transfer case adapter, so that (I think) the clutch linkage remains the same for both transmissions."

See also a close view of the identifying number cast into the top (20K JPEG).

Ben Neil describes his Jeep philosophy: "I believe in changing the mechanicals to meet your needs but still keeping original Jeep parts and looks a priority. My 1950 3A was in the Nov. 2001 JP magazine. I was at Moab running all the 3 to 4-rated trails -- never faulted once. Restorations are for museums and speculators. If you are going to live with them everyday, enjoy 'em and make 'em work for you. Life is for living." 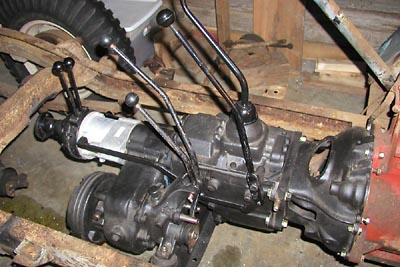 Bill Derkland installed the T98 as part of a beautiful six-stick tranny/TC/PTO setup in his '49 CJ-3A. Bill passed away in 2013, and as of 2014 his 3A restoration is being completed in his honor (see Bill's Willys.)

"The T98-A was introduced as a CJ-5,6 option in 1956. The installation includes the following parts. Most but not all of these parts are needed for CJ-3B conversions."