A couple of comments from a T-90 Rebuild Guide tell us the importance of the little bushing in the center of the engine flywheel, which holds the input shaft for the T90 transmission:

"I would suggest that every time the tranny is removed or rebuilt, that the bronze bushing in the center of the flywheel be replaced. This is an inexpensive item and not too much more work to do. The worst thing in the world is to rebuild the trans and have it go bad again in a couple hundred miles cause the input shaft is wobbling all over."

"I've had several folks that have rebuilt their T-90s, only to still have the same problem with gears grinding during the 2nd and 3rd up-shift. After going back and replacing the crankshaft pilot bushing, the problem went away."

Here are a few notes about my pilot bushing removal. My 1960 CJ-3B is for some reason sporting an L-head engine, so if something on the flywheel in the photos looks unfamiliar to an F-head, that is why.

I recently put my 3B on the road for the first time and discovered that there was oil leaking out of the front of the transmission, as if there was no seal there at all. That problem coupled with a worn second gear syncro made it very clear to me that the transmission was going to have to come out as soon as possible. Within a day or two, the transmission was out and its problems were being dealt with. 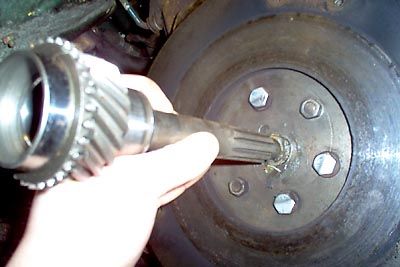 I thought the whole project was going very smoothly until a friend came over and checked out my pilot bushing. He advised me that it appeared to be a little too worn to re-use, and told me that I should probably change it. Not realizing how easy it was going to be, I thought I had come across a huge stumbling block in this project. He assured me that I shouldn't be worrying about it; "You can hydraulic it out with some grease," he said.

It sounded good but I was still a little skeptical about the whole deal. I asked him exactly how to do it and he said, "Just pack some grease into the hole, put your spare (worn out) input shaft in the hole and tap it out with a hammer. The grease will push at the the bushing from the front and work it out." 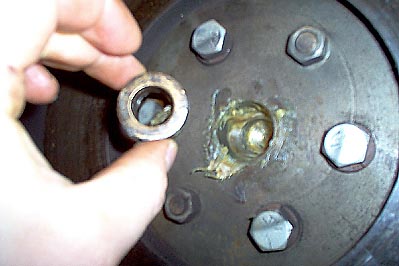 OK, it sounded simple enough. I did as he said. In went the grease followed by the shaft. I tapped the shaft with a rubber mallet. It seemed like it would be a little less jarring to do it with a mallet instead of a hammer. The grease packed in and the input shaft bottomed out and there was no movement from the bushing yet. I had to pack grease into the hole two more times before I saw any movement, but when I did it really took me by surprise. It came out quite effortlessly with only a few more taps.

I really wish I could say that I conquered a huge obstacle with minimal effort, but with a bit of hindsight, I found that it wasn't much of an obstacle. The whole job took under 15 minutes including the installation of a new pilot bushing. I imagine that any peice of round stock with a diameter similar to an input shaft would work just as well for the job.

Thanks to Nick for the photos. -- Derek Redmond