Chris Henry commented on the CJ-3B Bulletin Board: "I have just recently got my F-head engine running and my Jeep restored. The engine has been sitting idle for 9 years. I replaced the rear main seal last weekend and inspected the under side. Compression is about 100 psi (pounds/sq.inch), and the engine bearings and rod bearings all seem fine. 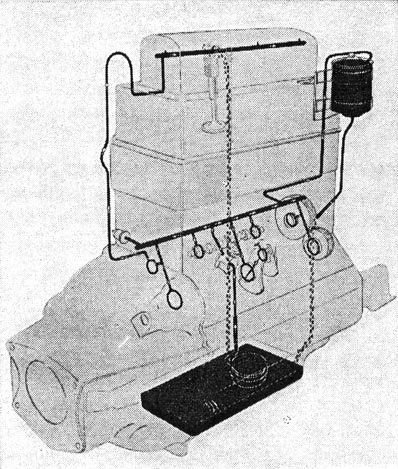 "My question is this: when I first start up the engine I get between 20-40 psi (pounds/sq.inch) of oil pressure. After the motor warms up, the pressure drops to what seems like 0 psi. I have put this on another (calibrated) gauge and found that less that 5 psi is acting on the system. I'm using Mobil 10-30W oil. I have heard that these are high volume low pressure oil systems. Is this pressure drop normal? I hope everyone else's motor is doing this. I'm thinking of using 15-30W oil."

Tim Salkeld said not to worry: "This is typical of many older engines including my '50 CJ-3A. While the crank and rod bearings may seem OK and are easy to check, we seldom check the cam shaft bearings. As the engine heats up the clearances become greater and the oil pressure drops. Revving the engine increases the pressure as the flow of oil increases."

Eric Lawson agreed: "Under 5 psi oil pressure at idle is only slightly low. I think the minimum, according to the book, is about 6 psi at idle. My engines (a 4L-134 and a 4F-134) tend to run about 10 psi at idle, after I've been driving 45mph for 30 or so minutes. I use 10-30W oil in the winter and 30W oil in the summer. As was mentioned, the cam journals and cam bearing/bores being worn can cause low oil pressure. A worn oil pump can also cause low oil pressure, especially at idle."

Joel Kamunen cautioned: "I wouldn't use 15W-30 as most engine damage is caused when you first start your engine cold. The higher viscosity oil takes longer to get circulated on start-up. Most new car manufacturers recomend 10W-30 even for modern engines."

John Hubbard had a suggestion: "Oil pressure can be increased by applying more pressure to the ball check valve, by removing the large bolt on the side of the oil pump and removing the spring and placing 1 or 2 small washers between the seat of the bolt and the spring and reassembling. This usually increases pressure several pounds (or more) and sometimes gets the pressure up while idling so as to ease your fears regarding engine damage at low RPM. I tried this method and still did not feel like I was getting the pressure I should to lubricate a newly rebuilt engine. It was starting off pretty strongly (40-50), but would diminish within about 20 minutes to low levels (less than 5 lbs. at idle). I pulled an oil pump (aftermarket) off another F-head and voila -- 50-60 pounds of pressure at start-up and 10 lbs. at idle (when warm). A new pump might make all the difference. They are about $100 here in Utah."

Scott Blystone meanwhile had the opposite problem: "My '53 3B runs great. Since I bought it, the oil pressure has always been around 55-59 psi (pounds/sq.inch). I know spec calls for 30 or so. Having asked around I've heard this is everything from no worry to a drastic problem. I've only logged about 100 miles so far, from crawling to 55 mph (miles/hour). No change in psi anywhere. Current explanations are: 1) bad gauge (waiting for replacement); 2) plugged oil passages on high pressure side of system. Does anyone else have this problem or any suggestions as to a cause?"

Bart McNeil: "My L-134 runs with oil pressure at 60 lbs with 30-weight oil. I figure that if the punishment for high oil pressure were severe then idiot lights wouldn't have been used in late CJ-3Bs. I've burned out plenty of engines and in all cases I recall low oil pressure preceeded the engine failure. Maybe you should count yourself lucky because with oil pump wear your engine will slowly get better and better oil pressure. Unless I'm missing something, my manual gives a minimum acceptable pressure (6 psi at idle and 20 psi at 2000 rpm) -- it gives no maximum acceptable pressure. However there is an oil pressure relief spring on the oil pump which can be adjusted by adding or removing shims. Removing shims decreases pressure (Jeep Universal Service Manual)."

Jim Sammons: "Try another gauge. If it's still high, it's probably nothing to worry about. Just keep an eye on it and make sure it doesn't rise any further. Some probable causes for high oil pressure are:

"You might want to remove the top valve cover, assuming you have an f-head, and see how she's oiling up top. With high pressure it should be getting plenty of oil to the rocker arms. If not, check the tubing running up the back driver's side of the engine to the head for kinks or mashed spots, or take it off and blow through it. If this tube is restricted it will increase oil pressure, not to mention what lack of oil does to the valve train."