Here is a bit of information that might be useful to someone else, and could just be an easy ignition upgrade for another 3B, or perhaps any F-head in another CJ perhaps? 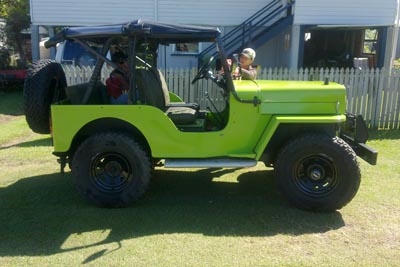 About a year ago I had a problem with irregular running on my old '53, "Tree Frog", and after all the money spent on refurbishing the body, etc. this was not acceptable to have the old girl farting and lurching around while looking so smart! I found that the distributor was quite worn out, and the cause of all the bad manners, was actually the distributor shaft flopping all over the place ruining the spark timing, and also making the old girl quite cranky to drive and hard to start. I have been getting all my parts from Neil Woolridge at Marathon Spares in Tamworth, NSW for the last several years, and immediately phoned him to hear if he had any rebuilt units or perhaps a kit in stock. He suggested I upgrade to a modern super-reliable electronic dizzy, and forget about ignition trouble for years to come. The reliability and low-maintenance sounded attractive, although I was a bit reluctant to change away from the old mechanical unit. Since the price was right and it was a complete replacement unit I decided to take the plunge, and boy did it make a difference! 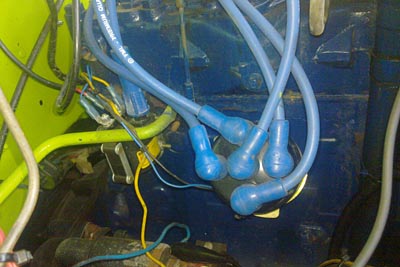 The old girl fired right up and ran like a Swiss watch; immediately an increased vigour was noticeable, and within a week the old rusty exhaust was also blown full of holes because of the increased pressure! I opted to fork out for a complete larger-diameter (almost double) stainless-steel exhaust-system with only 1 high-volume silencer across the back. Not only did the total power increase astonish me (about 25-30% by my estimate), but it suddenly felt like a completely fresh engine, and the old girl now had the bark and attitude to go with her new looks!

Recently she became a bit hard to start again, but I thought this was due to fuel issues (been getting some dirt through, and drain-back to tank due to high-mounted tank change-over cock on firewall) and installed an electric booster/priming pump in the fuel circuit, and a new cleanable fuel filter which improved starting for a while. Last weekend I went to look at an old '25 Dodge buckboard (120K JPEG) that some bloke nearby had almost finished restoring before he ran out of money; I thought this might make a nice shed mate for the Willys, and be a fitting 50th birthday present for myself. (Note from Derek: elsewhere on the web, see Brian Roberts' restored 1925 Dodge pickup.)

On the way back, the Frog suddenly lost all spark and wouldn't start up again! After a bit of fiddling around with limited tools available, I had to accept defeat, get a lift home to fetch the wife and my trusty old Land-Rover V8 to tow the Frog home where the tinkering could continue in earnest. First stop as usual was to print everything related I could find on CJ3B.info, and then back to the shed armed with multi-meter, timing lights, plug spanners, etc., just to realise that my new ultra-reliable electronics have given-up the ghost! 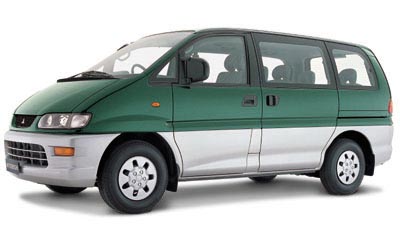 Next stop was the local Aussie Parts store with the offending articles in my greasy hand (no markings on distributor or electronic components.) A few hours of searching through various catalogues, matching pictures and cross-referencing part numbers to various models from several manufacturers, and guess what it is? A Mitsubishi distributor, commonly used in Starwagons from mid '95 to early '04, and also used in some Ford Laser 1.6 models! (Note from Derek: the Starwagon is known in North America as the Mitsubishi Wagon; for details, see Mitsubishi Delica at Wikipedia.)

A phone call to the local warehouse, delivery arranged, $160 for new components, and the Frog is right as rain again! 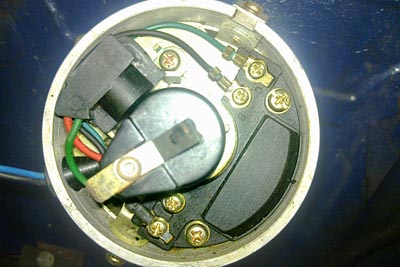 It appear as if the trigger mechanism is a permanent magnet; the old one is quite weak and might be the cause of the failure, or perhaps it is the less stable power delivery of the old Generator that fried the electronics. So now the question is whether to upgrade the power delivery system to a modern alternator? There is a crowd here who take the old genny housing and install brand new parts to convert them, but at almost $800 I am still thinking about it. There must be a better, more common and therefore cost-effective solution. Perhaps a Alternator from a Starwagon might also fit -- have to go and look for one at a wrecker this weekend.

Thanks to Hein for this surprise tip. See more on his High Hood Pair in Australia. -- Derek Redmond