Comments from the CJ-3B Bulletin Board relating to choosing and installing ignition coils, electronic ignition systems, and sparkplugs:

Curtis: "I have acquired an ignition coil which requires an external resistor, and I am uncertain as to how I should install these items. The instructions provided with the coil were vague, and I have been unable to find a clear source of information on this subject. Is the positive terminal on the coil to be connected to the positive side of the battery, or should the negative terminal be thus connected? I would assume that the positive terminal is so labeled as it is to be connected to the power side, while the negative terminal is grounded through the distributor (ultimately, plugs). Any clarification of this matter would be appreciated."

Scott Blystone: "My '53 (12-volt) has a coil with external ballast resistor. I would like to change to a non-external-resistor type coil. Is there any problem in doing this? Will it burn my points too fast, etc?"

Eric Lawson: "There won't be any problem replacing your existing coil with a coil that does not need an external ballast resistor."

Drac: "The idea behind a ballast resistor, be it a resistor wire as GM used, or a resistor attached to the firewall, is to drop the voltage to about 7.5 volts while the key is in the "run" position. This is to reduce the harmful effects of running 12 volts to the points all the time the engine is running. Simply put, 12 volts is not required to keep the engine running. On the other hand, it's nice to have 12 volts to the points when cranking the engine to start, so usually there is a separate wire, that is only hot when the key is in the "crank" position. In the case of the early Jeeps with a 'push button on the floor' type of starter this wire could come off the side of the switch that is activated when the button is pushed down. This wire would also be connected to the '+' side of the coil, along with the one from the ballast resitor. As to whether or not the resistor should be hot, yes it certainly should be, as any time electricity is forced through a form of resistance it creates heat, just like a stove element."

Dave Tschida: "I purchased an Omni-Magnum for my F-head after much consultation with Jacobs salesmen. Very easy to install but extremely poor performance. I later called MSD to see what they had for the F-head and without me mentioning the Jacobs experience at all he said the only thing thats effective on the point type system, especially 4 cyl., is a hotter replacement coil. He said the 6AL would be detrimental and I would lose power. The 6AL and the Omni-Magnum were explained to me by a Jacobs salesman to be similar in design. I called one last time to Jacobs to inquire about what they had to offer for the F-head and was told by a different salesman who was unaware of my previous dealings with them that the only thing that would work would be their replacement coil for hotter spark. When I inquired about the Omni-Magnum he said 'it won't do anything for you.'"

Drake: "Pertronix has parts to switch to an electronic ignition. Part number 1541."

Bruce: "Hmm, from reading these posts, sounds like to me the way to go would be with the bigger Weber 2-barrel carb, a set of headers, and a replacement point system from Pertronix, if you're looking for more horsepower. Might cost a little more, but in the end you might get the desired performance out of the old girl's 4 cylinders. I'm getting ready to upgrade my baby and think I'm going to go this route instead of the ignition upgrade route. Think this will be money better spent in the end."

Ed Wilson: "Thought some might be interested in my experience on this. I put the Pertronix electronic ignition module in my 6-volt '54 3B yesterday. I kept the old 6 volt coil, but added 7 mm copper cored plug wires. Everything else remains stock. Wow! No instrumented tests, but my impression is; smoother at all speeds, less throttle required in any situation, and much quicker acceleration. Almost un-Jeep-like. I should add this is on top of a year-old complete engine overhaul. It took about 30 minutes in my driveway and I did have to retard the timing after the install. It would seem the electronic ignition requires less advance than I was running and that might explain the quicker acceleration. I had to special-order this item, took about 10 days, and as of right now they have not invoiced my dealer so I do not know the cost. But you can put your old stuff in a plastic baggie for later and enjoy the ride!"

Note: Karl Russell in an article in Jp magazine cautioned that voltage in a 6-volt system may drop too low for the Pertronix unit to operate, when the starter motor is engaged. But he recommended the Pertronix for 12-volt flatfenders.

Also recommended on the CJ-3B Bulletin Board is the conversion from Genesee Products, who have useful information on their website.

Warren Newbury wrote in 2012 that his '53 CJ-3B has had an electronic distributor since 2009. He initially tried a Pertronix electronic points replacement and coil, but had problems and then installed an Omix Ada electronic distributor, which he says has been running great ever since. However, he comments that "I had to rotate the wire location in the new distributor cap by 180 degrees when putting the wires into the new cap. 1 became 3, etc. The tang in the bottom of the distributor shaft is off center. It only goes in one way." 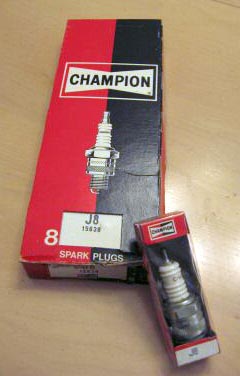 Jed Green: "I read a comment on the fact that our old ignition systems function better with non-resistor plugs. I've been running R45 AC-Delco's which are resistor plugs. I went to AutoZone and asked for Champion J8 plugs and they gave me plugs marked "J8C" and said the "C" stood for copper. They couldn't tell me if they were exactly the same as J8's or not. They were in a lawn & garden package and I was told that was all because Champion's non-resistor plugs are for mainly lawn and garden equipment now. Will these work? Does Champion still make J8s for auto use?"

Jeff Frick: "As embarrasing as it was, yes I had to leave the parts counter and go to lawn department to buy plugs. As far I know the copper is the only choice."

Lawrence Wade: "I was using the 45 AC-Delco's in my '55 3B but found the plugs didn't appear to burn hot enough. I changed to J8C and find they burn much hotter and seem to do a better job. J8C looked cleaner upon an inspection after quite a few miles. The only difference between the Champion J8 and the Champion J8C is that the C plug has a copper core electrode. This change (to copper) was made I think in the 1980's. Visit Selecting a Champion Spark Plug on the Edelbrock web site."

Glenn Smith: "I have never had any trouble with J8C's. They have been out for years and are supposed to be better. I haven't tried to specifically get just the J8's so I don't know if they are even available any more. Be careful with lawn and garden plugs because you might get ones where the shoulder is too short and you can't get a plug wrench on them to tighten them."

Elsewhere on the web, see Used Sparkplugs Tell a Story. 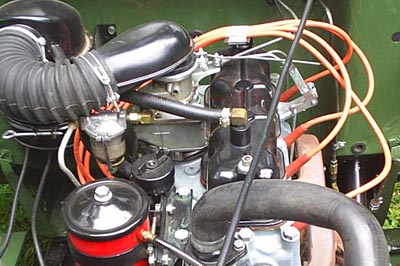 Ken Bushdiecker provided the following information regarding optimum spark plug wires. "I do not have a set of original plug wires to inspect. I have, however, figured my cables to an exact specification for type, style and length. The resistor wire has its obvious advantages around radios. If you are not concerned with radio interference, then by all means the solid copper core wires will easily out-perform the resistance type.

"Regardless of the type of wire chosen, one needs to consider the style of connections. There are three basic styles available, and many combinations. You will see the 90 degree, 45 degree and the straight connectors. With the F-134 it is surely best if the terminal connectors are straight on both ends.

"Now, these cables generally will need to be custom fit as for length. Below are the optimum cable lengths for the F-134 cables when used in conjunction with the standard spark plug cable clip. This spark plug cable clip is the original part that clamps the cables into position up above the rear valve cover. By using the following lengths of cables with the original cable clip, one will have the shortest possible cables and clear all carburetor linkages sufficiently.

"These measurements (measured from connector end to end) are accurate within 1 inch."

Thanks to all the contributors. Engine photo by Miguel Onofre. -- Derek Redmond

See also Am I Getting Spark? for ignition basics and troubleshooting, and Jyotin's "3BCJ" Hot Wire Box.