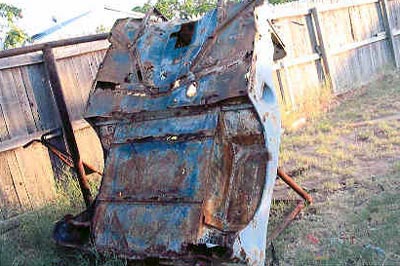 Bobby Cowley's photo is a view we don't often get, of the bottom of the body tub from his 1953 CJ-3B after it was removed from the frame. But it gives a good idea of the challenges often involved in repairing rust damage, particularly in the front (top) section of the floor with its network of "hat channels" (named for the appearance of the cross-section -- see diagram below.)

Brett Chitwood was ready to rebuild the floor of his 1964 High Hood and asked: "Can someone explain how to replace these supports; I'm thinking of buying all new supports, but confused. I don't know how I will know where they are to go in the case that I have, which is that I also need to replace at least some of the floorboards. How can you keep things lined up in proper position when everything is removed? I'm biting at the bit to get started." 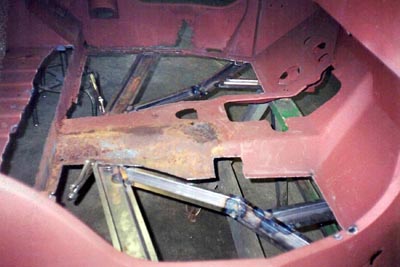 Piet Versleijen had been through it while restoring his 1956 Military CJ-3B, and outlined this procedure: "First take off the body from the frame and place it carefully upside down on a good support. Remove the complete set of channels by drilling out every spotweld you can find. Leave all the channels together as a model for the new ones. At this stage you can replace all the bad places in the floor by cutting out the rusted pieces and weld new pieces or a complete new floorplate in place. Make a copy from the old channels and use the parts of the old channels that can't be made by yourself (like the part in the middle of the bottom plate.)"

This photo gives a great look at the new channels in place on Brett's tub.

Piet is producing some detailed drawings of the channel pieces required, and has so far done a drawing for one channel. Download the complete drawing, or sections of it as GIF files for quick reference:

R. Jack added: "Clean the seam so you can see the spot weld locations. Drill thru the removal layer with a spot weld drill bit. With about an 1/8" bit (sized to the shank of a sheetmetal screw) drill the remaining layer and use an air chisel to separate the seam. Clean and straighten the remaining layer. Position new metal and drill thru using 1/8 holes as guide. Install sheetmetal screws with screw gun pulling together the two layers. Try body on frame for twist. Adjust if necessary. Back out screws one at a time with screw gun and plug the weld hole with MIG welder. Finished product should have appearance of original with spot welds in correct locations. This has been used to replace entire floor in less than two days."

Stan mentioned that "All of the pieces are also available without having to have them made. Classic Enterprises has it all. I wish I would have known about them when I did mine. The best way of attaching everything back together is with pop rivets if you don't have a spot welder." 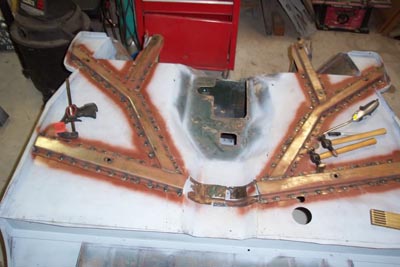 This photo shows the new hat channels installed by Don Norris on his 1953 CJ-3B.

While replacing the channels on his Jeep, Tim asked on the Bulletin Board: "What is the current thinking on replacing the wood or leaving it out? Leaving it out seems obvious, but will this let the new hat channels squash when the body bolts are tightened? Another thought was to replace with a piece of synthetic wood."

Bob says: "I don't think they had wood in them for support; they had some sort of a washer insert. I think it's worth the effort to try and build some kind of an anti-crush zone into them."

H. Wooldridge suggests: "How about using pressure treated wood or even some urethane stock. You can buy rods and rectangles of many types of plastics which will make a good crush block."

Patrick Kerr: "Instead of wood, I was going to try a snowmobile slider for the track as the material to replace the wood." 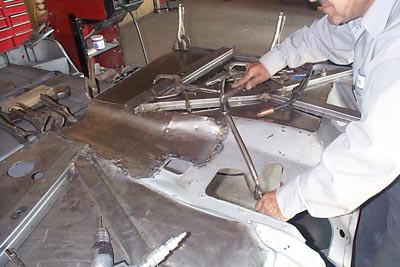 In this photo Ed Giamenico is working on the underside of the new floor for his 1953 CJ-3B.

Randy adds: "I can't speak for everyone but my 3B (1962) did have wood originally in the hat channels. When I replaced my floor boards and hat channels I debated for several days as to what to do. After debating the pros and cons I finally wound up replacing the wood.

"The original wood appeared to be I believe ash but can't say for certain. I was going to use oak but then a neighbor who is a cabinet maker by trade convinced me to use sasafras. He stated that not only was it a good hard wood but it contains natural oils that repel moisture. Or like Mr. Wooldridge stated previously you can use pressure treated lumber.

"I feel it is worth the extra time and effort to replace it as it does seem to give the floor more support when bolting the tub to the frame. I have since had "rhino liner" sprayed inside and underneath my tub so mine is virtually waterproof. With a good tight fit between the floor panels and the hat channels when welded, your floors should be fairly water tight. Prior to painting you could also seal the seams with a good urethane seam sealer to prevent moisture from entering. I hope this may be of some help in your decision."

Ed Wilson tells us: "A couple of other wood species I believe would serve well here are hemlock and yellow locust. Hemlock is a soft, light, pine-like wood with excellent weather resistance. It also happens to have a natural insect resistance. It has been used for years around here for construction areas close to the ground and fence boards.

"The Locust is a dense hardwood used for fence stakes. In nature, it will actually last longer wet than dry.

"I doubt your local home improvement dealer will have these, so it might take some searching. The local saw mills here usually have some of each."

Tim: "Thanks for the responses. I am thinking that I might try some sort of synthetic wood product (made from plastic milk bottles) and hopefully it will not melt much as I spot weld it into place."

I bought front floor panels formerly manufactured by JeePanels Plus in Maine. (Note: panels are available from Classic Enterprises in Wisconsin. -- Derek)

I have them pretty much done except for some smoothing and paint. They were $40 per side, very heavy gauge -- pretty much the limit for cold peening with 5 lb. hammer. Nice clean edges, nice preformed bends and flanges, clean holes, perfectly sized and shaped, etc.

That said, what a pain it is to put them in, mark them, take them out, hammer a bit, put them in and so on. Took about two evenings' worth of fitting to get them to match up with the transmission hump all the way around. Good overlap all around for welding or riveting. I laid the panels over an oak 4x4 to support them when pounding.

I recommend doing the passenger side first as you can continue to drive it while you do all the fitting and work out your own system -- then you will be faster when you pull the driver's side and gas tank. 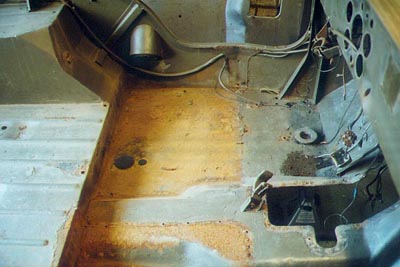 Taking out the toolbox is easy. Take 60 grit sandpaper and hand-sand the lip of the toolbox all the way around. The paint will come off everywhere exept in the depressions where spot welds are - this will identify about 90% of the welds. There are no welds on the rear vertical riser nearest the driver, and very few on the transmission hump itself. Other than those two places, there is a weld every 2.5-3 inches. I was able to drill them out with a 1/4" drill bit without punching through the body metal in most cases.

The panels have a 1/2" down-turned lip on the outer edge as did the original floors. This gives plenty of room to attach to sidewall. On the toeboard, you can put as much overlap (or upturn) on the floorboard as you want - I went about 1.75" as the bottom of my toeboards was practically dust. The overlap on the tranny hump side is such that the new panel overlaps all the way to the top of the tranny hump - in my case this was a 3-4" overlap.

Finally -- this is not a permanent fix. Hard to do that without tub-off major surgery. This repair is intended to last 5 years or so until money for a tub is more readily at hand. I started with carpeting being the floorboard on the passenger side, and the driver's side not much better. Now I can stand on the floorboards and jump up and down - thats quite a test seeing as the steering wheel leaves a black mark on my tummy when I drive it!

If you need a few more years out of that body, give the panels a try. Not pretty, but sound. -- Scott Blystone

Thanks to Doug Hoffman, and to Piet, Brett and Bobby for the illustrations. -- Derek Redmond