Build Your Own Rear Seat


Don't laugh, but I made my own rear seat for my CJ-3B this summer. It was a fun summer project.

Without a back seat, I would sometimes take passengers for a ride with themperched on the wheel wells in the back with nothing to hang on to and nosafety restraints. I am the first to admit that my homemade rear seat maynot live up to current safety standards, but then again much of the CJ-3Bdoes not. I tried hard to secure the seatbelts to the seat and the seat tothe Jeep, to provide a safer and more comfortable place for passengersto ride, but I did not attach the seat belts to the floor of the Jeep becausethat would mean drilling at least 3 more large holes in my already holeyJeep. Since my CJ-3B is for weekend pleasure rides and couldn't possiblycompete on the highway with modern vehicles, I think this rear seat issafer as well as more comfortable for passengers, than no seat at all. It is not intended to provide protection in an emergency situation or collision.

I measured the distance between the rear wheel wells, the height of the wheel wells, and the height of the front seats from the rear floor. I decided to make the frame out of 1/2-inch heavy copper pipe. This would be easy to cut and assemble. I sat down and sketched the frame of the seat. This established how many copper tees and angles and approximately how much copper pipe to buy. 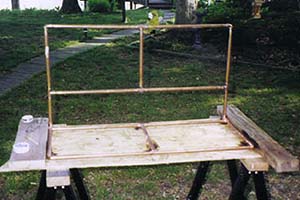 I took a piece of plywood and attached two 2x4's the distance of the wheel wells apart. This served as my guide during assembly. I used a pipe cutter to cut the copper pipe, and soldered the pieces together using a butane torch. 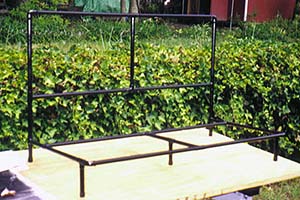 The front legs have a piece of steel rod inside each for extra support as do the back legs and up the back of the seat. The back is screwed onto the bottom for easier storage if I ever remove the seat. The 5 legs have copper caps on them. I painted the frame with black spray paint. 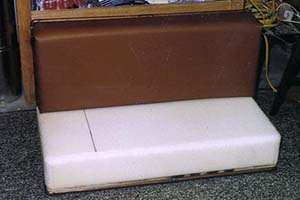 The cushions are made of foam (4-inch for the bottom and 3-inch for the back) that is glued on to a piece of 7/16-inch plywood and then wrapped in vinyl cloth like a present. I used scissors to "sculpt" the foam so the front of the cushions would be rounded instead of having a sharp edge. I used a staple gun to hold the vinyl in place and then used cup washers and drywall screws to secure the vinyl to the plywood. Before attaching the foam to the plywood bottom, I drilled holes and put on bolts with wide washers for attaching the seatbelts to the bottom. 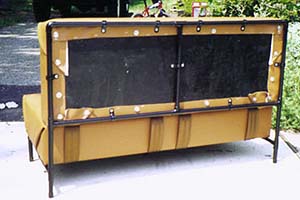 The cushions are attached to the frame with electrical conduit brackets, and I also used some of these brackets to mount the seat in the jeep. There are brackets on the front legs and frame back, attached to the wheel wells. 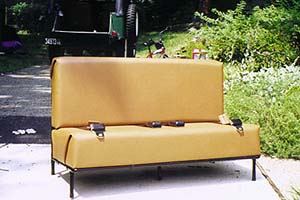 Overall, I think it turned out OK. The scarcity of original rear seats and the expense of reproduction seats drove me to this. Also, I was looking for a project for the summer. I spent about $100.00 on the supplies to make the seat. If I had obtained the seat belts from a junk yard I would have spent less. The seatbelts were $14.00 each since I wanted new ones to match the front seat belts. Now I can take 3 passengers in my CJ-3B, and I also feel better with my 5-year-old son in the back seat, when I cruise around with the doors off. -- Dan Fedorko

Thanks to Dan for this description of his project. It is worth stressing again that this seat is designed to provide comfort for low-speed driving, and is not intended to provide protection in an emergency situation or a collision. -- Derek Redmond

Bart McNeil has another suggestion: "I have recently noticed several rear seat possibilities which could be adapted from two-person passenger seats found on some Federal Express vans. These normally are fold-up seats and appear to be well upholstered. Even some modern garbage trucks have two passenger fold-up seats. For those with mechanical skills, who want a rear seat on a budget, a trip to the truck and bus graveyard might be in order. Several CJ owners have spoken of adapting old school bus seats to their Jeeps."