There comes a time for everybody (including Bruce Stanley, in the photo below), when they have to bite the bullet and pull the F-head engine out of the CJ-3B. In response to a request on The CJ-3B Bulletin Board, several guys with experience offered their advice on the job, and here it is. You can see from the number of times that they say things like "good luck" and "watch those fingers", that it is a job not to be undertaken lightly.

JC Jenkins has done it enough times that he almost makes it sound easy:

"Pull the grille and front fenders, pull the top off of the T90 trans., remove the x-fer shift levers, support the trans., unbolt the crossmember from the frame and trans., remove the u-joints from each end of the x-fer, let the support down from under the trans. -- it will tip up, and the whole thing will come out the front, together." 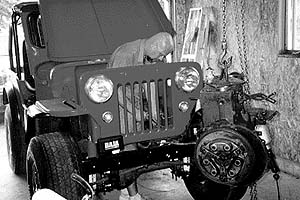 Jyotin warns that you should think ahead to putting the engine back in:

"I would pull the fenders and grille to start. Perhaps even the steering box and drag link. That's the easy part. Unless you take out the exhaust too, I don't believe that you could get the whole shebang out of there. The fun part will be trying to reinstall the engine, mate up the engine mounts, mate to the transmission/ clutch, and not lose your religion or any body parts all at the same time. Good luck."
Jon Paulsen comments on pulling a V-6:

"The Fenders and grille come off very easily and it should be worth the effort. When I swapped engines, I pulled the grille with the radiator attached (caaaaaaaarrrrrefully, not banging the rad on the fan). I was able to remove/install a Buick V6 without removing the crossmember or front bumper. I figured if I pulled the tranny and or T-case with it the bumper and crossmember would have to come off as well. I dunno with an F-head, but I suspect the same. It would have been nice to do the bellhousing-to-engine bolts out of the Jeep though, because I have to use u-joint sockets and all sorts of extensions and gizmos to reach them installed."

Terry Fairchild has a couple of tips on getting it back in:

"Pull the grille with radiator attached, unbolt the exhaust manifold, unbolt the motor mounts, unbolt the bell housing from the motor and that little beauty will slip right straight out of your Jeep. Of course don't forget all the ancillaries like gas line, throttle, choke linkage and generator. This gem will come out a lot easier than it goes back in, but if you get the clutch plate lined up by using a clutch alignment tool (an old input shaft) and take the rubber motor mounts off the engine plate on both sides (get 'em right out of the way untill after the motor is bolted back to the bell) you should be able to get the motor back in with minimal swearing, straining and time! Good luck."

"All of the other ideas are good advice. I prefer leaving the tranny and case in place as the F-head bell housing bolts are easy to remove.Putting the F-head back is a bit harder. Removing the mounts completly is an excellent idea, and I will use it next time around. Now my advice: when trying to line up the F-head with clutch use a pull bar and turn the engine as you slide it on the splines, This will help a great deal in the line up. Good luck and watch those fingers."

Thanks to all the contributors above. Further comments welcome. -- Derek Redmond