Dying Under Load: A Detective Story

It was a dark and stormy night when the call came in to Squad Room 3B. The guy sounded desperate: 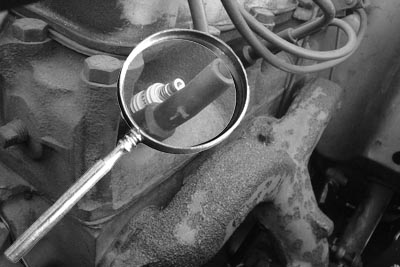 Scott Capan: "My #1 sparkplug wire has good spark when off the sparkplug. But when attached to the sparkplug, wire grounds out. How we know this is when hooking timing light up to #1 it does not work, and when we disconnect it and arc the spark from the wire to the plug, idle goes up and engine runs strong and timing light works. Have replaced points, condenser, router, distributor wire, etc. And the rest -- carb, fuel pump -- is all new. I have become like Jack in The Shining!"

Rus Curtis: "What I hear is that the wire, plug and timing light all work (with a smooth idle) when you pull the wire off the plug and allow it to arc?

"Have you tried the shade-tree version of elimination? Swap another wire with the #1 wire to see if problems migrate to the new #1 wire position. When done, try the same thing with the plug to see if the problem developes with the cylinder that has the #1 plug. Hopefully this will isolate your problem."

Scott: "You are correct, it all works and runs like a champ when the plug wire arcs over. As soon as you touch it to the plug, idle changes and bogs down and runs rough (but not severely.)

"Yes, we have tried the shade-tree elmination process. With the same results. We put the timing light on all the cylinders just to see if we had the same problem, but everything worked. We even took #4 wire and plug and put it into #1 and had the same result. Rough idle, no spark until you pulled off the wire and arc'ed it over. Then runs like a champ. 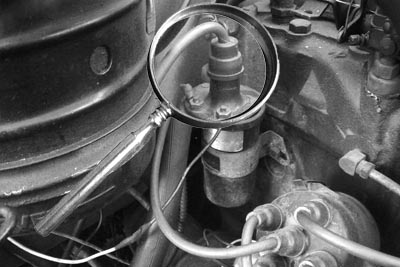 Glenn Smith: Did you try replacing the coil? Seems like I remember someone saying a weak coil can cause that. I know when a weak coil gets hot it'll cause problems; just barely run, etc."

Anon: "New plugs DON'T always mean that they are OK. Have you tried other plugs?"

Joey Herrin: "This is going to sound silly but it worked for me. My '54 38A1 was doing the same thing once. I tried everything you have mentioned; nothing worked. My buddy down the road stopped by one day while i was piddling with it, took one listen and told me my intake valves needed adjusting. I did, and it ran like a top. Been over a year and it still runs good."

Jon: "They used to sell a gizmo called a spark enhancer. It went between the coil and the distributor and provided a gap for the the spark to jump before going to the plug. It looked cool too. But the problem with it is that it's masking a problem with the primary or secondary electrical system for ignition, or possibly elsewhere as Joey described.

"If it's arcing to ground when it's connected to the plug, you should see it if you run it in the dark of night. (That's also a good time to whisper sweet nothings to your beloved B.)" 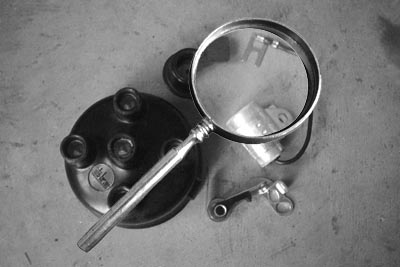 "If that test passes, I would test and/or adjust all parts involved in the ignition, from the battery to the spark plugs. You'll cover 95% of the battery and wiring problems if you measure the voltage into the coil both key on/engine off, and running. Yep, I've had this happen with bad batteries and alternators. A complete tuneup should cover the rest. If it's not electronic, you might have a point problem, gap, dwell, etc. Condenser and coil should be replaced. Is it the right coil (i.e. does it require a ballast resistor)? If there is a ballast resistor, you should measure across it for resistance (ohms) and see if it is what it's supposed to be.

"Adjusting the valves is cheap and was suggested, so better try that. If nothing else works, I'd do a compression test or even a leakdown test if there still seems to be no underlying cause. When it runs smooth by providing a gap, is it running rich? Do you smell gas at the tail pipe?"

Rus Curtis: "I'm definitely working without a safety net here. This is an interesting problem. Can we assume the distributor cap is new/good? Does the #1 rotor contact look different from the other three?

"I'm assuming that since the timing light didn't work at all when the wire was connected properly to the #1 plug, that the wire was not firing at all. If that's true, you should be able to remove the wire completly and not notice any difference in the rough idle (firing on 3 cylinders).

"It seems there's an insulation problem and it only occurs when the wire is connected to the plug. Do you have an old wire you can remove the boots from and connect it to the plug to see if you experience the same problems?" 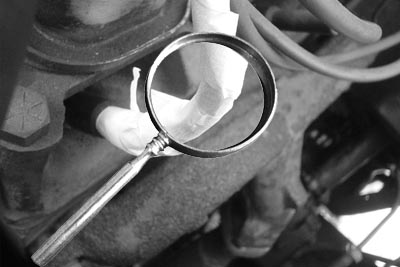 Hollis Wooldridge: "Completely wrap the plug and wire in one layer of white freezer tape. Start the engine and idle for a while - don't be concerned with the misfire. This tape is not an insulator so if there is an ambient arc, you will be able to see one or more black dots on the surface of the tape after running the engine for a few minutes. If there are no black dots, it is grounding out elsewhere."

Sergio: "Firing order? Engine could eventually idle reasonably with one wrong spark plug connection but not with two. Now that I wrote it, sounds silly. I bet on the valves."

Bob: "This one is a good one. This is only a guess, but check your compression. I might guess a blown head gasket between one and two cylinders. This will also determine if valves need adjustment. I know this does not explain loss of spark on #1, but everyone else has pretty much got that in the box. Also, check wires to make sure if resistive or not. Some plug wires are 100K ohm resistance and others are close to zero ohms. I do not know what type the B's call for. Also check the timing mark and see if it moves with plug wire connected (not firing) and plug wire disconnected but firing.

Scott Blystone: "Your compression is off in that cylinder. Likely to be valve adjustment more than anything else. When you let the spark arc over it runs better because the delay in spark happens to coincide with the best possible compression in that cyliner. First try adjusting the valves; if that does not work, pull the head and lap them -- look for obvious things like bad guides. Last resort as mentioned above is get the seats ground and valves to match.

Scott: "Gents, here is the deal now. I took all of your advice and adjusted the intake and exhaust values to proper specs. Made sure that the gap on the spark plugs were correct. Also RTV sealed the valve cover and the exhaust/ push rod cover. (Yes, some things were not right on.) After everything was bolted down I fired her up and checked the timing (with the timing light on the #1 plug, and it worked) and she was right on. She is running like a Swiss watch.

"But here is the kicker: now when you put the engine under load (in gear) for about ten feet, she dies. Let it sit for a second or two and start her up and off you go for about 15 or 20 feet. The story of woe continues. Thanks for all the help -- almost there." 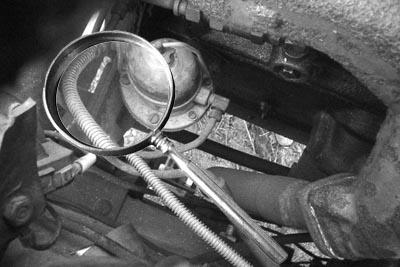 Bob: "Only two things could be wrong. Loss of spark, or gas. I would check the fuel lines first since your ignition system is mostly new. Also check coil and coil connections. Loose connections there could cause loss of spark under load. I had a Vega once that would lose spark after I put it in gear. Turned out to be a coil wire to distributor almost burnt in two. I would also suspect a gas delivery problem, i.e. fuel filter or pump, or something in or around the carb."

Bruce W: "Also make sure that the condenser is tight, both to the breaker plate, and if it has a clamp to hold it, it is tight in the clamp. Check that the wire from the points to the cond. is tight at the points, and not rubbed bare anywhere. We used to see this when aftermarket condensers were smaller than the GM one, and guys would leave the old clamp, and just slide in a new condenser."

Scott: "Well gents, thanks for all your help. SHE IS UP AND RUNNING like a champ."

Anon asked: "Umm... what was the source of the problem?"

Derek: "Yes, this is a good story that I'd be tempted to archive, except that the ending isn't very satisfactory for the reader. But at least another 3B is on the road again -- or more likely it's not a 3B, and Scott was just picking the brains of you sharp 3B owners...."

Scott: "Gents, sorry for not responding. But for the record, I was not just testing the group on troubleshooting. Here it is, starting from the top:

"As you can see there was more than one issue. I take my hat off to all of the people that put in their 2 cents worth. Without their input and their enjoyment of getting another piece of history on the road, my 3B would still be in the garage. Now I am on the road, and off-road, having a blast in my 3B. I am going to e-mail a couple of photos and my serial number, so there will be another record of a working 3B.

"Thanks for the help and your web site."

Derek: "Thanks for the recap Scott. Yes, it is an interesting detective story because of the several problems involved, and the surprise ending."

Thanks to all the dicks in Squad Room 3B. Note: the photos do not show the actual Jeep involved, so are probably not admissable in court.

Scott, if you're out there, we still need to fingerprint and photograph your Jeep for the CJ-3B Database. -- Derek Redmond