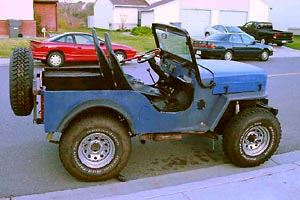 I had seen auxiliary fuel tanks on several CJ's in the past, and actually would have never done it on my 3B if not for the previous owner already taking out the tool box under the passenger seat. I try to shy away from hacking up a body, but mine was pretty bad already. So I am trying some new ideas. This project is not for the restorer! In my case, I was working with a CJ-3Bthat was not even close to being restorable, and I had already decided to put this body on a CJ-5 frame.

Having two tanks will double my fuel capacity for long trips and gives me piece of mind... well, sort of. And I think the passenger should sit on top of a fuel bomb too! Just to make it fair. 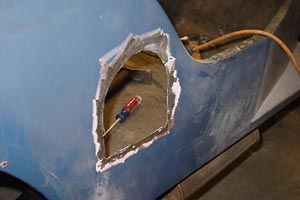 I picked up a good used CJ gas tank. I also needed another stock fillercup. I was fortunate to find a whole section of the drivers side rockerpanel with the cup intact. I removed the filler cup, then reversed thesection of rocker and placed it over the passenger side area I intended toadd the cup to. I traced the hole opening right on to the rocker and cut itout with a plasma cutter. The result is a perfectly placed, mirror image ofthe drivers side. 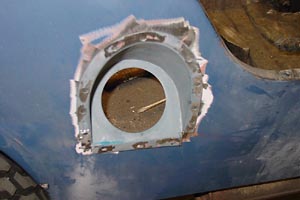 Next, I spot welded the new filler cup in place just like the original.

With both necks installed, I could coat the tub interior with Herculiner (80K JPEG) which is almost as good as the spray-in bedliners and is a heck of a lot cheaper. (Surface preparation is the key to applying Herculiner and POR-15. I wire-wheeled the entire interior, then degreased with a good cleaner, then used Xylene to prepare the surface. Then it was only a matter of spreading the goo around until everything was coated. A few hours later, I applied the UV coating the keep the surface glossy.) 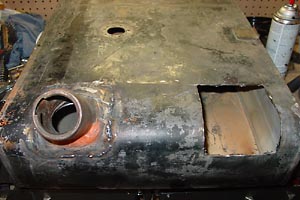 Now, of course, I needed to move the filler neck on the extra fuel tank to match the passenger side. I cut a clean, square hole where the neck was, and moved it over to its new position.

After test fitting, a hole was drilled for the new neck, and it was carefully welded in place, along with a patch over the old hole (110K JPEG). It is important to note that when welding gas tanks, they should be filled with water to prevent an explosion. 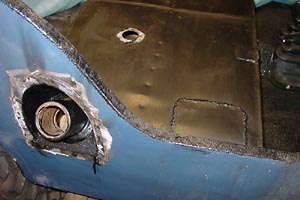 I am using a dual gas tank solenoid (40K JPEG) from a Ford pickup. You just flip a switch and the other tank starts flowing. You can even wire it so that the fuel gauge works when you flip the switch. (See the installation instructions, 50K GIF.) 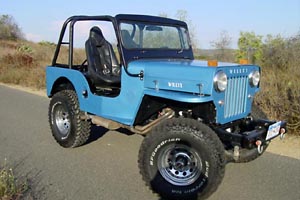 The new gas tank fits perfectly. I even picked up an original gas cap to match the other side.

Thanks to Jonathan for the article and photos. -- Derek Redmond