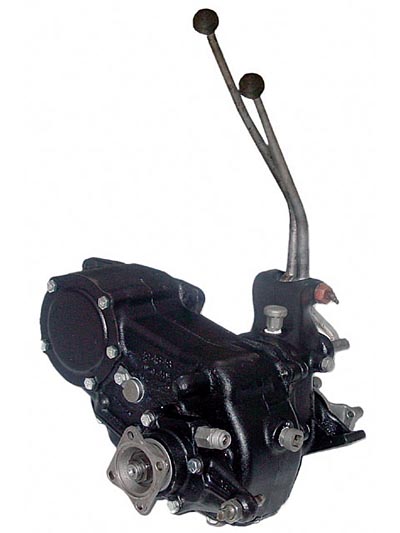 "It is quite easy to match; the transfer case is a bolt on. I have a CJ-5 with a 4.3 GM, T-18A, a Dana 20 with the guts of a Dana 18 and two Dana 44s with 4.56 gears and it gives me a respectable 70.9:1 crawl ratio. I have 36 inch Swampers and it crawls well and is a good all around wheeler, but still nice on the highway. Get all your options before making your choice. You can find a T-18A for cheap and make all of the modifications for cheaper than you think."

"By the way, a quick and easy way to determine the low gear ratio of the T-90 is to look at the transmission shift lever. If the lever end that the shift knob goes on is threaded, it is 3.3:1, if it is not threaded then it is 2.9:1. Now that assumes that the shift tower has not been swapped with another transmission."

John Hubbard: "O'Brien's 4 Wheels West at 916-773-3278 has a 4.10:1 or a 4.86:1 kit using a bigger diameter intermediate gear in the model 18. This obviously involves cutting a larger hole in the bottom of the case for the larger gear and then welding a cover over it. The big drawback is you can't use any overdrive on the back of the transfer case."

Jim: "I have installed one from O'Brien's. You need to be very experienced to attempt one. Also remember that your Dana 27 is only so strong even with stock engine. You can get down to about 70 to 1 without going that way, but that involves removing the T90."

JC Jenkins: "I just talked to Jack O'Brien, the maker of the Rockeater gears for the Spicer 18 -- the price is $1529.00 for the kit (gears, gaskets, and detailed plans). The thing is basically bulletproof -- the gears are made of the same material that helicopter transmission gears are made from (far exceed OEM specs)."

Randy Buchanan has another suggestion: "First, I am not particularly enamored with low-gear conversions for Dana 18's.  The reason being that none of them  address the weak intermediate shaft problem the gearbox has, and in fact, they only make it worse. You really don't need lower transfer case gears in anything you'd use a D18 for anyway, as you can always use lower axle gears which puts the reduction at a point it needs to be in the first place. Plus, they are ungodly expensive!

"Nobody has mentioned the "Silent Intermediate Gear Kit" which used to be very popular. One of the problems with the Dana 18 transfercase is intermediate shaft wear and subsequent noise.  This is caused by the helical cut gears and their 'indirect thrust'.

"Direct thrust is when a gear transmits its energy at 90 degrees to the shaft it runs on. Indirect thrust is incurred when helical cut gears are used. The teeth are angled and this style of gear is generally used to cut down on noise, but the by-product is some of the energy being transmitted at an angle other than 90 degrees. This off-axis component has a negative effect on the intermediate shaft by causing it to wear 'conically'.  In other words the gear has more thrust on one side than the other, and is being forced to twist on the shaft.  The end result is the bearings supporting it are forced to deform the shaft and wear unevenly. This is common with the D18, and the more it wears the louder the transfer case gets, because the gear is not being supported evenly and it wobbles. 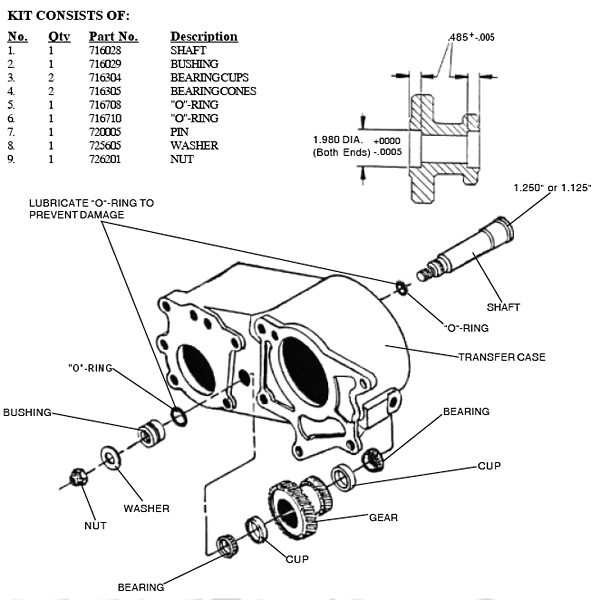 "The best fix for this is the 1-1/4" Intermediate Gear Kit marketed by Advance Adapters. It consists of a new intermediate shaft and 2 Timken bearings; it used to include a modified intermediate gear, but that is no longer part of the kit.  The gear was modified by turning recesses into either end to accommodate the outer races of the Timken Bearings. The new shaft floats in the case and is held in place by the original key, but there is a nut on the opposite end which is used to preload the bearings.  This arrangement is much stronger than the original setup due to the increased size and quality of the bearings.

"I have one in my Mercruiser CJ-5s D18, and none other than Rick Pewe of Petersons 4WD mag commented it was the quietest transfer case he'd ever been around, and he should know. This was after a full day of riding with me.  As far as strength goes, a friend has one that has been behind a 454 Chev motor and SM420 gearbox for years and years with no problem, and he had it in the vehicle for 10-15 years before taking up competition rockcrawling. It never gave up and I'm sure he still has it.

"The kit was about $160.00 last I checked, and is definitely the best thing you can do to a Dana 18 besides using thread sealant on all of the bolts so the thing doesn't leak like a sieve."

Tom Fredericks came to the Bulletin Board looking for some torque specifications. "I just finished replacing the shoes on my hand brake. During disassembly, it took a lot of torque to get the main nut off that holds the u-joint companion flange and the brake drum onto the transfer case output shaft. I needed a two foot pipe extender on my ratchet handle to get it off. Now it's reassembly time and I'm wondering how tight to put that nut back on. I tightened it with the pipe extender perhaps one-eighth of a turn after I couldn't tighten it any more with the ratchet alone. Is this tight enough? I don't want the thing to come loose, but I also don't want to bust something and wind up with another repair job."

Carl Jantz replied: "Is it the type with a cotter key? If so, then it’s 175 foot-pounds and then turn it to the next hole for line up of the cotter key. If there is no cotter key, then use blue Loctite and tighten to 225 foot-pounds."

A question was asked on the Bulletin Board about how to identify the proper mainshaft gear. 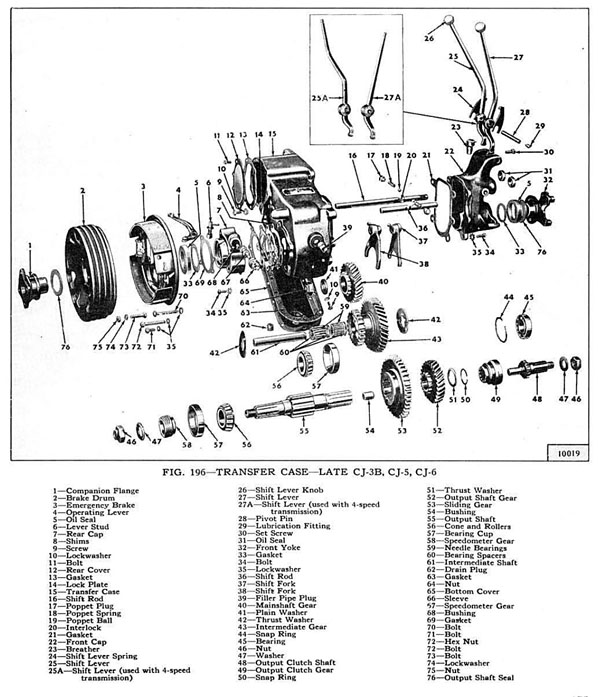 Oldtime provided this information: "The mainshaft gear is shown in figure #10019 in most Universal Jeep Service Manuals. In this figure it is noted as part #40.

"Eric from Novak, Bob Hutchins from All Trans Parts and myself, Herm the Overdrive Guy, got together and made a D-18, D-20 gear selection chart for identifying these gears. We three made the contributions to cover all of the applications. The 'Dana 18/20 Gear Interchange Chart' is available on my website or Novak's website. This is a very handy tool in identifying gears in the D-18 and D-20 transfer cases." 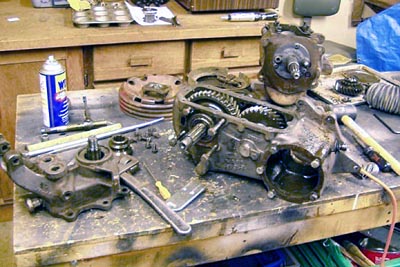 Jon Paulsen: "It's real easy. I did mine with the transfer case in place. There's an access panel on the floor by the shifters (to the right). If you remove the cover, and a set screw holding the shifter's cross shaft in place, the cross shaft is pulled out through the access cover, and the springs fall loose. You might want to replace the shaft, too. I think mine cost 3 or 4 dollars from Willys Works. The springs were less. I replaced mine because it was popping out of 4 Low. It solved that problem and quieted it down too. You can tell if the springs are weak by the feel of the levers and also you can grab the levers while driving it and squeeze them together. If that quiets it down, the springs might help. After replacement, the transfer case felt good and tight when shifting it. It's worth a shot for a few dollars worth of parts and a few hours work."

John Beshears: "I finally got the Model 18 torn down to replace the bearings and seals ... I was surprised to find that the shift forks lock bolts were safety wired (although it was very thick wire, like concrete tie wire). It was a bear to remove the hi-lo range shift fork wire because of access ... I can't imagine actually putting it back. Has anybody come across this? What about using some red Locktite instead of wire?"

Terry: "I found the lock bolt on the hi-lo range shift fork safety wired on a model 18 transfer case from a 1953 M38A1. I did re-wire it (twice put the fork in backwards). I didn't like the idea of the bolt coming loose inside the case and chewing a gear up. Loctite would probably work but I didn't take the chance.

Eric Lawson: "Loctite, either red or blue, should work well... if you get the bolt and the threaded hole clean. The safety wire is actually quite fine and is easy to twist using a small pair of needle nose pliers. If you use safety wire, make sure the torque put upon the bolt by the wire tends to tighten the bolt. If you don't, the bolt won't fall out, but can work slightly loose and give a 'mushy' feel to the shifting of the transfer case."

Thanks to all the contributors including Keith Hepper for the workbench photo, and to Ed Wilson and Doug Hoffman for editing. -- Derek Redmond

Also lots of information on the Dana Spicer Model 18 at Novak Conversions.