George Romond had this suggestion in response to a request on the CJ-3B Bulletin Board for advice on adding disc brakes to a CJ-3B.

"I used front brakes off a 1977-78 Jeep CJ. They bolt right on, you use the caliper mounting plate because it bolts on right with the spindle bolts. It does require some grinding of the steering knuckle so the caliper doesnt hit. You use the wheel bearings from the Willys and the hub and rotor from the donor Jeep. I like this because it's all Jeep, and your locking hubs will still work on the new hubs."

Rich asked for some further information: "I happen to have the front axles, including disc brakes, from a '77 and '83 CJ-7 and was looking at this swap last night. What I can't readily see is how to mount the caliper mounting plate to the knuckle."

Steve said: "When you disassemble the 3B's Dana front-end, remove the lockout hub and the wheel bearing retaining nuts. Slide the hub/drum assembly off of the spindle and you will see the six bolts that hold the spindle onto the knuckle. This is what holds the caliper mounting bracket onto the Jeep. Remove these bolts, and get replacements that are 1/4" longer. These are hardened bolts. The ones that I took off were grade 5; I replaced them with grade 8.

"While I had it all apart, I ran a tap through the holes in the knuckles and inspected them carefully. Some folks have had these bolts pull out of the knuckle and recommend putting studs in from behind, in place of the bolts. For extreme or off-road use, this is probably a good idea. For street use and occasional wheelin' this is probably overkill. I replaced the king pins, king pin bearings and cups. I also did the felt and rubber seals on the back side of the knuckle while it was all apart.

"For hydraulics, use the correct brake hoses for the donor calipers. They should plumb right up to the existing brake lines on the Dana axle. Replace the oil fill pipe plug on the knuckle with a flat, slotted head plug commonly used for outdoor electrical boxes and seal with silicon sealer. A small amount of grinding on the knuckle may be needed to clear the back of the caliper, and to allow it to slide back and forth on its pins.

"This is one of the easiest and most important upgrades you can make to an early Jeep. You will need different wheels, as the stock 3B wheels will not clear the caliper. Wheels from a Ford 4x4 1/2 ton truck will work, as will those from a Scout with disc brakes."

Tony: "This conversion was one of the easiest things we've done on the 3B during our rebuild, and one of the most satisfactory. The actual brake conversion cost us a total of approximately $250. Add about $120 for the brake master cylinder, and a few more bucks for the pedal assembly and clutch cylinders, and a few odds and ends, and our brake/clutch conversion ran under $500. That is about what you will pay for a 2-wheel conversion kit that includes only the brake rotors and calipers for the front axle. We haven't yet put a lot of miles on our converted 3B, but we have been very pleased so far. 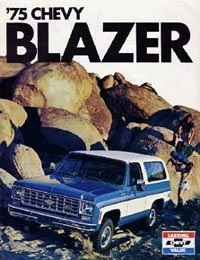 "I took backing plates, which included caliper mounts, and calipers from the front of two '75 1/2-ton Chevy Blazers. Several years, from about '72-'78, will work. These bolt right up to the 3B's D25 front and D44 rear axles. I returned the old calipers as cores for rebuilt units. Make sure to get the old calipers for cores, because the core charges were $22 each while the calipers were $18 each! All of this bolts right up to the stock 3B axle housings with a few minor modifications. You will need to remove the square plug from the front closed knuckles and replace them with a flush plug. I used 3/4" electrical box plugs.

"You will also need to clearance some of the bolt flange on the front knuckles so that the caliper will mount and slide on the slider bolts without interference. It may also require some very slight clearancing on the calipers themselves to ensure smooth operation. All of that takes about two hours and no special tools, but an angle grinder is nice.

"We bought new rotors for a 1978 Jeep CJ. We punched out the old lug studs from the 3B's hubs and installed new, longer studs from Chrysler. The rotor mounts on the back of the hub, with the stud entering from the back of the rotor, through the rotor and the hub. The hardest part of this operation was removing the hubs from the rear axles. You may need a hub remover made for this procedure. We got ours from Kaiser-Willys.

"At this point, you have to do a bit of fabrication. You will find on trial fitting that the rotor is about 3/32" to 1/8" off center to the inside of the caliper, causing contact with the inside pad. Suggestions offered varied from sanding off the inside pad, to machining the back side of the hubs. We found an easier way that has proved satisfactory so far. We made a washer about 3/32" to 1/8" thick to place to the inside of the inner wheel bearing, against the inner bearing seat. You will need to make sure that this washer is made to fit flat against the bearing seat so as not to cause uneven pressure on the bearing when the unit is assembled and tightened down. This moved the entire bearing/hub assembly outward the necessary distance to center the rotor in the caliper. We have experienced no ill side effects.

"We used brake hoses for the '75 Blazer and fabricated our own brake lines. We welded brackets to the rear axle housing, similar to what is already on the front axle, for the flex lines to attach to the hard lines. Make sure you put double flares on the hard lines. It's a safety issue. We had a local brake shop put the flares on our lines after we cut them to length.

"We ordered a master cylinder from Brake Masters that is made for 4-wheel discs. We have been told that this is important; although, I have heard from people who have done this conversion and used the stock 3B master cylinder successfully. We thought it important to have dual brake fluid reservoirs, so we went with the expense. We bought an adjustable brake proportioning valve from Jeg's Automotive to adjust the front/rear braking. Since we could find no master cylinder that would fit in the stock location, we headed for the salvage yard and purchased the hanging pedal assembly from an '86 Cherokee. We were able to position the assembly on the firewall so that the pedals both hung on the left side of the steering column, yet were comfortable to operate.

"As one thing led to another, we also purchased the clutch master and slave cylinders for the Cherokee. The brake master cylinder and clutch master cylinder will fit on the firewall with no interference if you are very careful with your placement. You will also need to reinforce the firewall with some steel plate (we used 1/8") so as to avoid flex from the pedal pressures. We also had to make a support for the pedal mounts to keep it from twisting when the clutch was depressed. Sounds hard, but it wasn't. The clutch slave was mounted on the frame under the floorboard, aft of the stock clutch linkage assembly. We made an "L" bracket and mounted it so that the slave cylinder linkage operated the stock clutch linkage."

Thanks to Tony for posting the description of his project.

"I used Chevy half-ton brakes on my '47 Willys, front and rear. Everything bolts right up, you need outer axles from a early closed knuckle internal hub front end. If you want to keep your 5 lug bolt pattern you can use Ford half-ton rotors. I used '76 Chevy stuff and I cross-referenced bearing numbers between Ford and Chevy and they were the same. On the rear I had to have axles made and the inside of the spindles bored out. I haven't had any problems with this setup so far, and it is the best stopping Jeep I have ever driven." 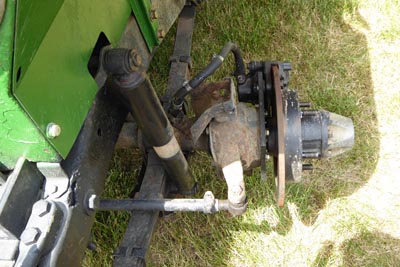 This is the Geo Tracker disk conversion on Bob Stevenot's CJ-2A. It's a popular conversion in recent years, using 1995 or earlier Geo Tracker / Suzuki Sidekick front rotors and calipers.

See a detailed discussion on the Willys 3A and 3B Community