Dashboard Solutions for a Repro Body

I am becoming an expert on how the inexperienced tinkerer gets a repro body to fit a 1958 CJ-3B frame. There are several small things that are just not right on the repro tubs, but I don't think you can be too picky, and I further doubt that any manufacturer will do as good a job as Willys did in the 50's. In short, you are going to find yourself modifying this thing no matter what you do or which tub you buy.

Don't worry about cutting the floor holes -- they are nothing to do and should not worry you. The tub will not fit exactly as the last one so I would consider it dangerous to pre-bore anyway.

The dash holes are the harder ones to do, mostly cause they require a larger, (i.e. far more expensive) cutter for your hole saw. Worse yet if you have not got a mandrel and 1/2-inch drill to drive it.

There has been discussion on The CJ-3B Bulletin Board regarding cutting the holes for the gauges: 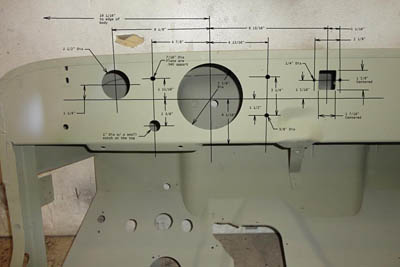 Ratchet posted this great photo including measurements for a late CJ-3B dash with the large instrument cluster.

Scott asked: Is the initial measurement 19 1/16 in from the left edge? And is it the very outside edge measured up from the bottom 4 1/16 in?

Ratchet: "Yes to both questions. Find and mark the center lines for the large gauge and everything else works off those lines."

A drawing by Piet Versleijen (right) shows the spacing of the dash holes for an early (1953-56) CJ-3B. See also a version with measurements in millimeters (4K GIF).

Clifton Clark asked: "What is the best thing to use to cut the dash holes for gauges in a repli-tub?"

Jyotin replied: "You could rent a set of Greenlee punches at a tool rental shop.

"In my 3B I had the welding shop put them in, but I have put gauges in a CJ7 that I had once and I used the Greenlee punches.

"My only complaint about the Greenlee punch was that the punch that I rented was well used and not as sharp as it could have been.

"Be sure to check behind the dash in the area you want to put the hole to make sure that you are not trying to punch a hole through some sort of brace or something." 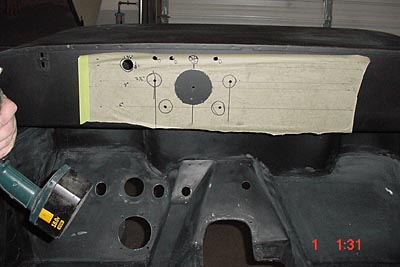 Clifton commented: "I have looked for a 5-1/2 inch holesaw but cannot find one this big (which is the size of the hole on the later model 3B with a single combined gauge). I thought about just using a jigsaw (turning the speed down to be accurate) and rounding off the rough edges with a circular file or grinder. Has anyone done it this way? What do you think?"

Jeff suggested: "If all I had access to was a jigsaw, I would drill holes around the perimeter that were large enough to fit your saw blade and I would use high speed and move the blade slowly so it doesn't grab. Play a little connect the dots and make sure you use a fine tooth metal blade. The more holes, the easier it will be for you. Good luck."

Ernie remarked: "I used a jigsaw by choice and had perfect success. A fine tooth blade, one hole to get started away from the edge, go very slow, split the line on the inside and very little clean up with a sanding drum on a die grinder. The hole will get somewhat smaller when it's covered with paint. I also glued the new speedo in with 4 spots of 5200. Remember, you can always make the hole larger, but not smaller. Good luck."

Or Use the Old Dashboard 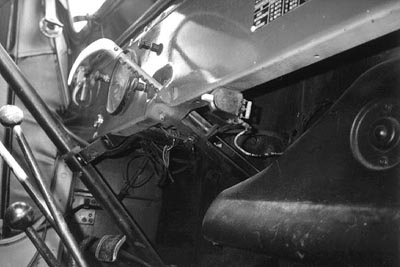 Your new dash will also not have a place to bolt up your steering wheel bracket and does not have the dash-to-firewall supports the original has. It's not a real big deal to fabricate a brace, just takes some time. (See Frank Porfidio's Repli-Tub Installation on CJ3B.info.)

I removed the new dash and welded the old one into the new tub. I think this is the best solution and worth it even if you have to hire a guy to come do your welds.

The old dash is a far stronger affair. The gauge of the metal is same but the upper seam is bent to slide along the metal where dash meets the body (top firewall?) to make a more solid brace. This would be real important in a rollover or side collision with a tree. Also, the old dash has been clamped and bent on a brake to get the right tilt for the parking brake and steering column. The new dash does not have braces to the firewall -- the old dash had two. Not to mention that all the holes are drilled out.

I thought I would have problems removing the dash, and it was very trying, but I purchased a spot weld cutter for a drill and managed fairly well. The toughest part is right on the corners where you have to do a fair amount of pounding, prying, grinding and swearing.

To re-attach, I installed the dash and brought it up snug to the top of the body with bar clamps and C clamps. The holes provided excellent openings to fit a C clamp through. I then turned the feed rate on the welder down as low as it would go, reduced the amps to "1" setting and put some spots welds on. I used flux core wire as I never have bought a gauge and gas for my MIG. I am a terrible welder, but managed to do a fair job without burning any holes through. -- Alan Haley

Thanks to Tech Editor Doug Hoffman, to Piet for the dashboard drawing, Frank Profidio for the hole saw photo, and to Alan and the other contributors for these tips. -- Derek Redmond