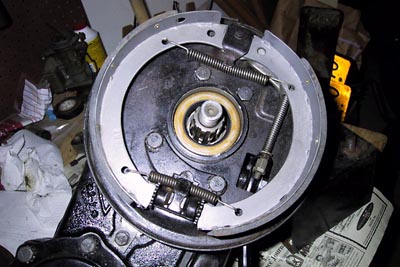 I thought some who are still waiting to do this job would appreciate some tips to save them some of my errors. My old cable was fraying and binding so I bought a new one from Krage Motorsports -- 'twas cheap. Before you start mucking up the cable, use your manual to make sure the brake shoes themselves are properly adjusted -- the manual does a very clear job of explaining this.

I thought I could remove old cable at the dash and work my way down, removing old and replacing with new as I went -- WRONG. You need to put the bottom end of the new one on first. That said, here would be the steps if I did it again. 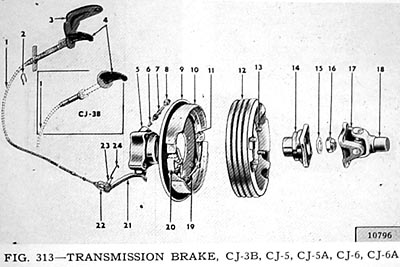 2. Remove the old cable and clips. My bolts were all 1/2-inch. The firewall clip is easy. The clip on the crossmember is harder to get to. Use a standard 1/2 open end wrench on the top to the bolt -- slide it and your arm over the skid plate. Use a 1/2" socket on an extension to reach through the access hole of the skid plate and turn the nut off. You may need to wash the under side of your jeep -- especially over the skid plate so you can see the bolt head. The clip that holds the cable on the bellhousing just pulls out with a good tug. 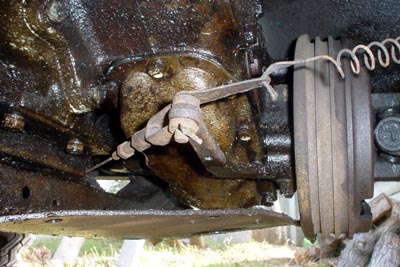 3. Work the cable down so it lies on the ground under the Jeep. Get some Liquid Wrench, vise grips, 1/2" wrench, and go under the e-brake housing. You need to unscrew the cable from the fork or remove the fork. The fork is held onto the e-brake lever by a clevis pin and cotter pin. Mine was seized pretty well and I never did get it off. After some WD-40, the fork swung freely though so I pressed on. While you are under there, take a good look at the condition of the chain and return spring -- mine was pretty rusty. A standard hardware store trip to replace those parts. Anyhow, I unscrewed my cable from the fork while I was under there.

4. Now you can remove the clips from the old cable -- just insert a large screwdriver and twist to spread the clips. Clean the clips and bolts well.

6. Put new cable on the ground under the jeep. AVOID making a permanent bend in the cable. If your floor is messy, wrap the exposed twisted wire with Saran Wrap first. Screw the cable into the fork until the end of the screw is visible from the back of the fork. It takes a bit of fiddling to get the angle right to get the threads started, but with the cable on the ground, pull down on the e-brake lever and you should get it OK. It helps to shoot some WD-40 through the fork threads first.

7. Bend the cable in a loop and thread it over the skid plate, to the driver's side of the front driveshaft, and up along the bellhousing. Remove Saran Wrap. 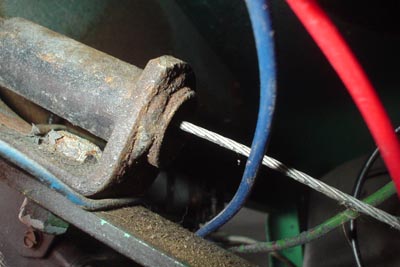 8. Replace the transfer case crossshaft clip first. Then go up to the engine, pull the cable up, slide a bolt through the clip and flange at the firewall, thread the cable through the firewall. From passenger compartment, insert cable end and cable into the e-brake handle. Next tighten the firewall clip securely. 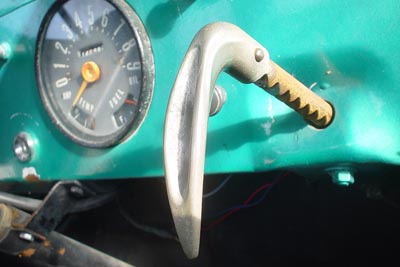 9. Make sure the e-brake handle is all the way in. Go under the Jeep with a 1/2" wrench and start tightening the cable. You should hear the cable turn in the sheath every turn or so. As you tighten, keep an eye on the e-brake lever -- it should rest on the e-brake housing, but the slightest tension on the cable should pull it forward. When you think you have it right, go up and try the handle. It should come out about 4 clicks and hold the vehicle still against a good push. Finally, attach the cable clip at the bellhousing. Try to get a smooth curve in the cable before you push the clip into its hole. Then use WD-40 to spray dirt off the free ends (unsheathed ends) of the cable, and put a couple squirts down along the e-brake handle on the dash.

10. Test drive in a a safe area -- no people, pets, trees, ditches, etc. Start at a slow speed, pop it out of gear and see if your e-brake will stop you and how hard you have to pull. Experiment to see what kind of speeds you can stop from this way. It works pretty well. If yours does not, either adjust cable length, or use your manual to adjust the e-brake shoes. Be patient -- it took me about three hours over two nights to get it adjusted well, but as I live in a pretty hilly area, I feel much safer driving around now.

Thanks to Scott Blystone and Tech Editor Andy Scott, and to Rus Curtis for the photo of the brake shoes. -- Derek Redmond