We don't have any actual production figures, but the beautiful Cerulean Blue DJ-3A Jeep Surrey is less common than the Tropical Rose version, although not as rare as the Jade Tint green variation. The name Cerulean apparently derives from the Latin caelum, meaning heaven or sky. The paint color used by Willys is similar to the cerulean crayon made by Crayola, which is brighter and has more green in it than the true cerulean blue pigment used by artists and made from cobalt stannate. Some early publicity (120K JPEG) referred to the color as "Sheraton" blue, and it is a color still used by Sheraton. Maybe this was a factor in Willys' color choice.

A Cerulean Blue Surrey is the latest Willys Jeep to be restored by Bruce Agan in Iowa (and it won't be the last.) In the photo above, the 1964 Surrey is seen with a Royal Blue 1961 DJ-3A Dispatcher which has now been sold (you can't keep them all) and Bruce's 1951 M38, which was his first restoration, completed in October 2000. See also a rear view of the three Jeeps (150K JPEG) and see more on the M38 below. 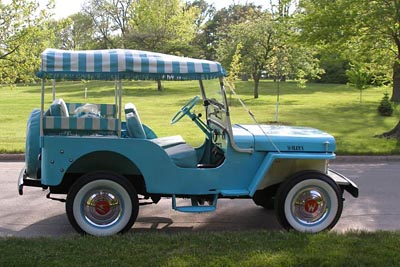 Bruce describes his purchase of the 1964 Surrey: "While visiting my daughter in December 2001, when she was stationed aboard USS Abraham Lincoln CVN-72 in Everett WA, we found a 1964 DJ-3A Surrey (serial number 8404-24210, special order tag D-3072) in pieces. The previous owner told me the Jeep had started out in Hawaii as a hotel-owned rental. He brought it back to the mainland and parked it, where it sat for years while parts were being sold from it."

This photo and a rear view (170K JPEG) were taken at Union Park in Des Moines. 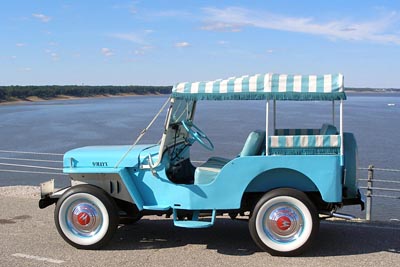 "It was missing both front and rear seats and the hubcaps. The bows had been cut down and welded together. There was not a stitch of fabric other than the original straps. But the Jeep did have most of the hard-to-find parts, including the rear bumper which still carried the state of Hawaii registration, AAA and hotel parking stickers.

"It's now pretty much stock but still missing the chrome outside rear view mirror, and correct visor mounts. It was finished in spring 2008, and even though it took us close to six years, it turned out to be a fun family project full of of highs and lows." 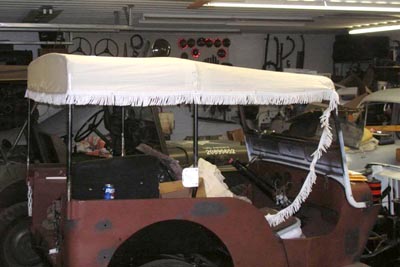 As is always the case with a Surrey restoration, especially a blue one where all the original fabric is missing, recreating the striped roof and seats is a big challenge. Bruce started with plain white cloth placed over the unpainted tub, in order to make a pattern for the top. Unable to afford or even find a manufacturer to make the few yards of striped fabric in the correct color (110K JPEG) he opted to spray dye and create his own. 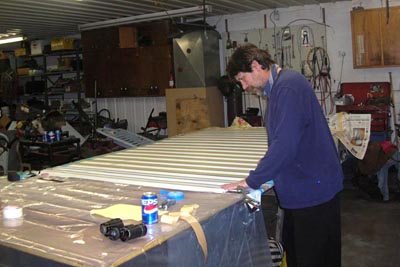 Bruce describes what he's doing in this photo: "Starting with all-white fabric, we stretched it out, taped it off (60K JPEG) and used an HVLP gun to spray dye all the fabric and fringe." 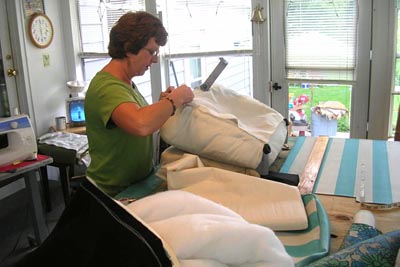 He continues: "Only having pictures and no patterns, we couldn't find any local upholstery shop wanting to help. So again my wife Linda and I decided to do it in-house. The cutting and sewing of all fabric was done here at home. I am pretty proud of our handmade seats and spare tire cover." 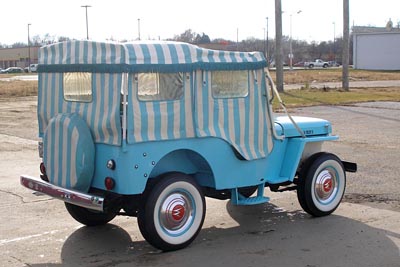 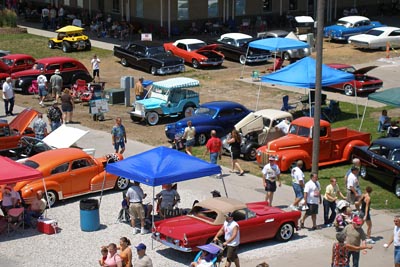 The Agan family loves introducing people to the Willys tradition by taking the Jeeps to shows, and they are regulars at the Iowa State Fair, among other events in the area. Bruce usually drives the M38 in the Veterans Day Parade on the first Monday of the fair in August, and this great photo shows the Surrey sitting happily in the middle of a crowd of hot rods at the car show there in 2008. 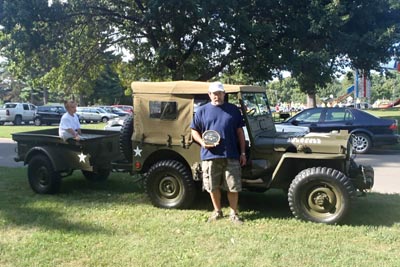 The Cruise to the Carousel car show at Union Park in Des Moines is another favorite show, and both the Surrey and the M38 have won trophies there. Here's Bruce at the 2011 show holding a Top 25 plaque (130K JPEG).

The 1951 M38 (serial number MC 28115) was bought and restored in 2000, and then repainted in 2011. The engine was not the original MC or RMC engine, so it was removed for use in the CJ-2A, and a correct replacement was rebuilt by a local machine shop. Bruce says, "Other than welding a few holes left from a roll bar and non-military lights, there was little to do to restore this Jeep. It had been parked in the early 1970's covered with a Best Top, which really helped keep rust at a minimum." 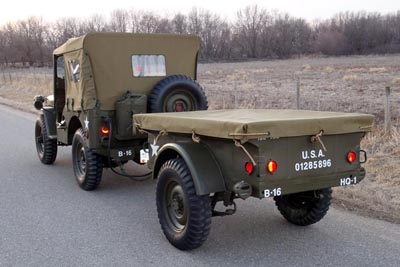 Bruce adds, "We're still running 12V today but we do have all 24V accessories -- we just need the wiring harness to complete that part of the resto. A new Beechwood winter top was put on the Jeep in late 2008. The 1952 Dunbar Kapple M100 U.S. Army trailer was restored in March 2011. We replaced the rear panel which had been cut out and was missing. Taken down in pieces, media-blasted, new bearings, seals, primed and painted. New canvas from Beechwood to match the Jeep's cover. Made a nice addition to the M38 and looks great behind it." 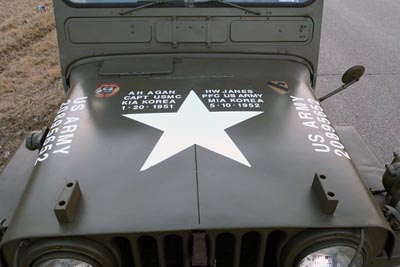 "In the process of buying manuals and researching and working on the M38, I discovered two family members who had served and died in Korea. Wanting to honor their sacrifice on the Jeep, I needed to find out more about both. Little did I know that my research would help both immediate families in receiving medals and the much-needed truth about the loss of their loved ones. It was no longer just about restoring a military Jeep; it became about family, service, loss, remembrance and honor." 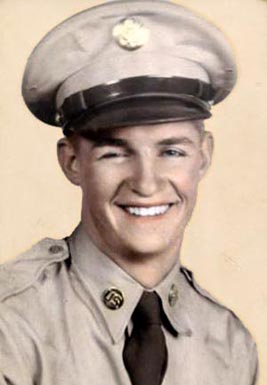 "In the case of PFC Howard W. Janes, the family never knew what happened to him other than he disappeared while serving with U.S. Army in Korea. He was my mom's first cousin, and the family called him Petey. We were able to obtain classified documents from the 1950s that showed what was done to find him, the interviews conducted by Army officials, the maps that showed where in Korea he went missing and the areas they searched. We obtained lots of documents that the family never knew existed that offered answers and gave peace to his sisters who remember the loss of their brother. After extensive investigation his status was classified as MIA May 20, 1952. Long overdue Purple Heart and Korean War Service medals were awarded to his sisters in 2009."

"While looking for anyone who may have served with Capt. Agan (in WWII and Korea) I posted my request for information online. I got a call from USMC Capt. Al Grassilli who was VMF 212 Fox Flight Division Leader off the carrier USS Bataan in 1951. He told me Al was his wingman and all about the last bombing run my cousin was on. He told me that the story of that flight was recalled in a book of true military aviation events during WWII and Korea, called The Second Luckiest Pilot by Lt. Col. Don Tooker. Chapter 5 in this book is the true story of my cousin's last flight and his loss over Inchon."

"I contacted Lt. Col. Tooker and he told me about my cousin's F4U Corsair being shot down following a bombing run. Capt. Grasselli had circled Al's downed plane, throwing out his life raft and dislocating his shoulder in the process. Now Capt. Grasselli had to land on the deck of the USS Bataan with one arm, an almost impossible task flying the Corsair. He made it back on deck and was honored in Washington DC in 2000 for his efforts that day. Capt. Agan lost the battle to stay alive in the freezing water, and was dead upon recovery." 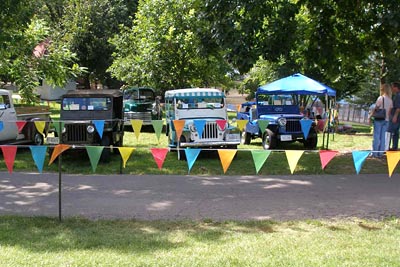 A lot of people have heard the stories of Capt. Agan and PFC Janes, as a result of seeing Bruce's M38 on display. He says, "It seemed more than just a coincidence to me. I simply set out wanting to honor family members who served in Korea, but the Jeep has become the rolling memorial to their service, and I feel honored to be its caretaker."

He adds, "Second only to the satisfaction and pleasure of researching and working on the Willys, would be the people whom I have met and become friends with."

As of early 2012, Bruce is working on the restoration of his 1949 CJ-2A (100K JPEG), which will also be a memorial to a lost family member, Bruce and Linda's son Bradley.

Bruce explains, "I had bought the CJ-2A (serial no. 222564) in December 1999, and finally started tearing it down in February 2008, with help from my 25-year-old son Bradley. It was going to be Brad's Jeep when we were done with it, but we lost Brad in June 2008 just after finishing the '61 and '64 DJ's. We then put off working on the 2A until 2011 when we finally got it torn down and had everything media blasted. The rolling frame is now done and ready for the tub. The previous owner had double-walled the entire tub and windshield frame with sheets of steel, making it extremely heavy. The original engine had seized and the block had welds on it, so I decided to use the engine we took out of the M38. I'm still working on getting it ready for paint. We plan on a nice memorial paint job for my son, and to save this Jeep for his son, whom we have adopted."

Bruce supplied the photos and information on this page. The photo of Marine pilots is courtesy of Air Group 4: War Diary of Two Marine Squadrons. -- Derek Redmond