Here's an interesting companion to the Pictorial History of the Universal Jeep. How would you do if you had to identify a Jeep by its front clip alone? This chart is reproduced with permisssion from Motor magazine in Indonesia. The text is in Indonesian, but "Willys" is the same in any language. 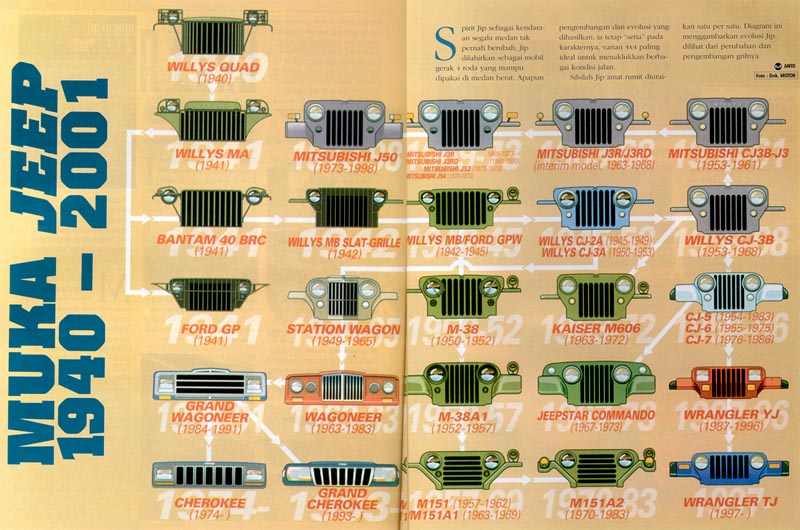 There are some omissions in the poster: the "Willys" stamping is missing from the CJ-3B grille (although it is correctly seen on the Mitsubishi J3). There's also the renaming of the Jeepster as "Jeepstar" and the omission of the CJ-8, DJ-5A and M715. And M606 production lasting through 1972? The last ones were built in 1968.

Angus Findlay sets them straight on Cherokee grilles: "They list the 1997-01 Cherokee grill as 1974 and onwards. Cherokee XJ's had 8 rectangular slots in thegrille, each with 2 vertical pieces, from 1984 to 1997 when they got the new one. From 1974 to 1984, the grilles were closer to the pickups and Wagoneers. Oh yeah... They also messed up the Grand Cherokees. Again, listing the WJ grille for both ZJ and WJ."

The variations in wagon grilles over the years are not included (but it is nice to see the wagons here in comparison with the Universal Jeeps). Here's a summary of grille changes on the Willys trucks and wagons: From 1946 until 1949 the grille was flat; in April 1950 it changed to a sharper peak in the center. Before 1950 there were no horizontal bars; from 1950 to 1953 there were five horizontal bars with chrome trim on some vehicles. In 1954 the number of bars was reduced to three (as seen on the poster). In 1956 the three bars were not evenly spaced, with the middle one closer to the top, but after 1956 the grille returned to the three evenly-spaced bars. That information is from Rick Grover's website on Willys Jeep Trucks.

Since the poster was created in 2001, the newer Wranglers, Cherokees, etc. are not included.

Thanks to Rizka S. Aji of Motor magazine. -- Derek Redmond