They Meet Again in Flight of the Phoenix (2004)

This is one of those brief glimpses of a CJ-3B with a very small role in a Hollywood movie. Near the beginning of Flight of the Phoenix (2004), Kelly Johnson (played by Miranda Otto) arrives in a right-hand-drive Jeep while a Fairchild C-119 "Flying Boxcar" is landing on a dirt airfield. The Jeep has a glove box and appears to be a Mahindra.

The story: When an Amacor oil rig in the Gobi Desert of Mongolia proves unproductive, Captain Frank Towns (Dennis Quaid) and copilot A.J. (Tyrese Gibson) are sent to shut the operation down. However, on their way back to Beijing with the oil rig crew and supplies, a major dust storm rips apart one of their engines, forcing them to ditch their C-119 Flying Boxcar in an uncharted area of the desert.

The plane is damaged beyond repair, and it becomes apparent that they are 200 miles off course with only one month's worth of water available. At first they decide to just sit and await rescue. However, after realizing that their value to Amacor is less than they had originally believed, they reconsider and decide to rebuild the remains of their C-119 into a new, functional plane. They christen it "The Phoenix" after the legendary bird.

The problems grow when a group of bandits camp nearby, but they are killed in a short, fierce skirmish. Eventually the new aircraft is completed and takes off barely in time to escape a larger group of bandit attackers. 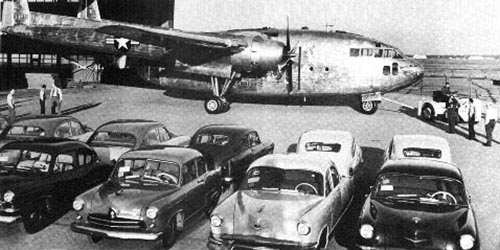 The brief juxtaposition of CJ-3B and C-119 in Flight of the Phoenix is a small coincidence, but it brings to mind a longer history where Jeeps and Flying Boxcars have had some things in common.

The first link between the two was the Kaiser-Frazer Corporation, which in the early 1950s was building C-119's alongside Kaiser automobiles at its Willow Run, Michigan plant (left). At the same time it was purchasing Willys-Overland and the Toledo plant where CJ-3Bs were just going into production. 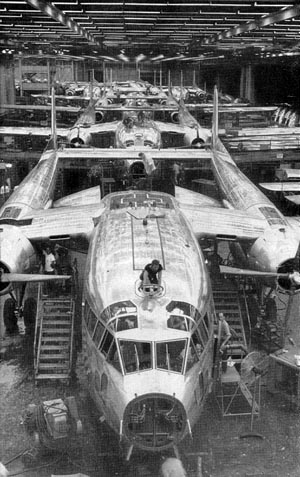 As described in When the CJ-3B Was New on CJ3B.info, Henry Kaiser appeared before a U.S. Senate committee in 1953 in a futile attempt to defend the sky-high cost of the Flying Boxcars he was building, compared to those built by the Fairchild Corporation. How did it happen that his move into a well-established airplane program was so much less successful than his takeover of the Jeep brand?

Henry John Kaiser made his fortune before World War II in shipbuilding and civil engineering. During the war he was involved with movie mogul and aviator Howard Hughes in the early development of the ill-fated gigantic flying boat known as the Spruce Goose. Then after the war he teamed with Joseph Frazer, to make cars under both the Kaiser and Frazer brand names, including the stylish Kaiser Deluxe (50K JPEG) and the unique Kaiser-Darrin 161 Roadster (see What Henry Kaiser Gave Up to Make Jeeps on CJ3B.info.)

Kaiser-Frazer couldn't make cars cheaply enough to compete with the Big Three, which perhaps should have been a warning about competing with the big aircraft manufacturers. But Kaiser had purchased Ford's Willow Run aircraft factory after the war, so a plane-building contract from the Air Force seemed like a logical step, and would provide guaranteed income while the car business was struggling. In 1951, Willow Run started to build the C-119 troop and cargo carrier, originally designed as the C-82 during the war, with an eye toward the invasion of Japan.

A Time magazine article headlined "More Trouble for K-F" on 24 November 1952 stated: "K-F landed the C-119 contract soon after the Chinese Reds moved into Korea two years ago. Fairchild had developed the plane, and said it had plenty of idle capacity to turn out more. But at the time, the Air Force was looking for a second source of supply for critical equipment. It wanted Willow Run but the only way it could get it, and thus prevent the Army from snatching it for tank production, was to take K-F in the package."

Most C-119 production was carried out by Fairchild, and there are conspiracy theories as to why so few planes were made by Kaiser-Frazer and at such high cost to the US government. Some insiders claimed that Fairchild had been slow to supply some of the parts, and reluctant to share technical information (see Kaiser-Frazer C-119 Production Mystery by Rudd Leeuw.) Estimates vary from 55 to 88 as to how many planes K-F actually built out of the total of over 1000 C-119's (Wikipedia). Another mystery is what happened to the unfinished K-F planes; some may have been repossessed, stored, and then shown up in Korea or Germany, redesignated as Fairchilds.

Another Time article on 6 July 1953, headed "The Ax for Willow Run" described what happened on Capitol Hill: "Armed with stacks of statistics, Henry Kaiser and son Edgar appeared before a Senate subcommittee last week to defend their performance in making airplanes at Willow Run. But in the midst of the defense, an aide passed them a note containing some startling news: Air Force Secretary Harold Talbott had just canceled Kaiser's orders for C-119 Flying Boxcars.... Next day, the Kaisers laid off 9,000 of their 12,200 workers at Willow Run." The plant was soon sold to General Motors for $26 million. 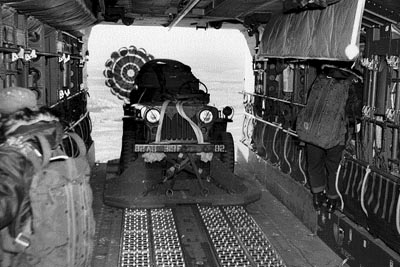 Jeeps and Flying Boxcars often went into action together. This Korean War-era photo is from the collection of the U.S. Army Quartermaster Museum in Fort Lee, Virginia: "Exercise Snow Storm: A pilot chute pulls out a jeep from the rear of a USAF C-119 transport plane as the 82nd Airborne Division makes a heavy equipment drop, during the Army's winter training operation. The men cling to the sides of the plane to get out of the way. Snow Ridge NY, 1953. U.S. Army Photo." 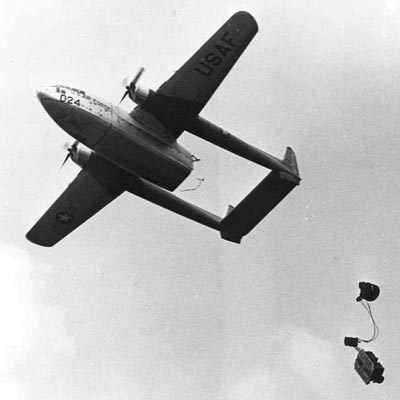 This USAF photo from below shows a Jeep being dropped by the 434th Troop Carrier Wing, Bakalar AFB, Indiana. The main parachute has not yet opened.

A detailed description of the rigging and dropping of an M38 Jeep from a C-119 included the following figures:

There was also a slower way of unloading a Jeep from a C-119 (100K JPEG) which allowed keeping the rear doors attached to the plane.

C-119's served in Vietnam as Shadow and Stinger gunships, and were used by the USAF well into the 1970's.

Behind the Scenes of Flight of the Phoenix 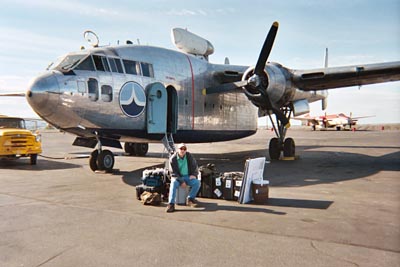 Sound recordist and teacher Rodger Pardee documented his work making extensive audio recordings for Flight of the Phoenix, using the same C-119 flown during shooting of the film (see Sound Effects Recording Sessions: C119 Flying Boxcar). This photo shows Roger with all his recording equipment, in front of the plane.

He points out that this C-119 has been fitted with an auxiliary jet engine above the fuselage, as many of the planes were, to assist takeoffs when the plane is heavily loaded. Roger also photographed the cockpit (90K JPEG). 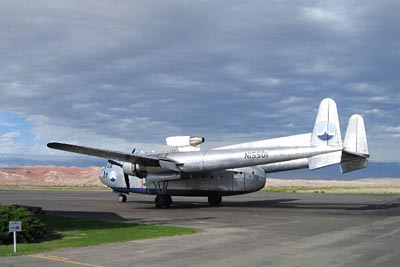 Ralph Pettersen has some information about this particular plane in his Mysteries at Greybull WY. It was received by the Royal Canadian Air Force on 29 July 1953, and after retirement was sold by Crown Assets Disposal Corporation to Hawkins & Powers, in 1981 or perhaps 1977, and given registration number 15501. It was stored at Greybull airport in Wyoming, where H&P maintains the Museum of Flight and Aerial Firefighting.

Pettersen says, "N15501 made its way to Namibia, Africa during December 2003, to participate in a movie (remake of Flight of the Phoenix). This flight must be considered an epic undertaking in itself." It flew to Africa via the Canary Islands, and returned to to Greybull WY via Brazil in June 2004. 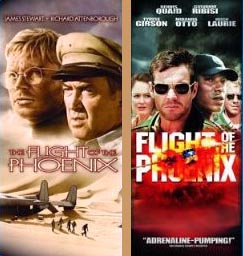 Flight of the Phoenix was indeed a remake of a 1965 film, based on the 1964 novel of the same name by Ellleston Trevor. The first film version was produced and directed by Robert Aldrich in 1965, starred Jimmy Stewart and Richard Attenborough, and was shot in Buttercup Valley, Arizona, a desert site that had been used many times for movies. Production of the original film unfortunately included the death of stunt pilot Paul Mantz while flying the rebuilt "Phoenix" (see Final Flight of the Phoenix.)

The full-size Phoenix in the 2004 film could be taxied but not flown; the flying scenes were done with radio-controlled models. But this did not protect the set from tragic accidents; second-unit cameraman Ciaran Barry was struck and badly injured by an 800-pound model plane. (Wikipedia)

Thanks to Federico J. Cavedo for spotting this CJ-3B in the movies. -- Derek Redmond