When I put together the collection of photos called Life Goes On, I realized that in many of the pictures from the 1960s, Vietnam didn't really look like a country where a brutal war was taking place. Once again on this page I'm documenting one aspect of the culture of that time and place: the fact that high-hood flatfender Jeeps were common on the streets. But in a number of the photos here, the realities of war are also a little closer to the surface.

Click on the photos to see big, detailed copies. 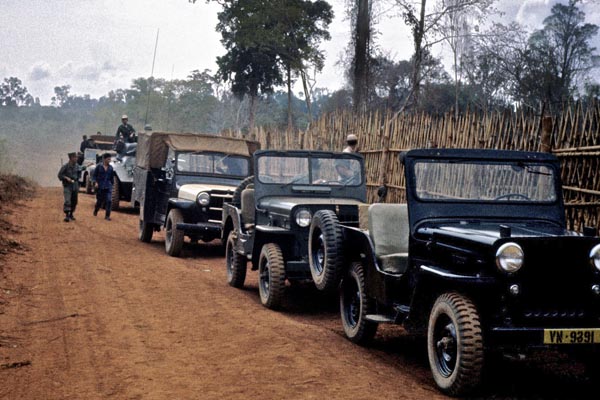 Phuoc Long, near the Cambodian border, was the site of a decisive battle between the Army of the Republic of Vietnam (ARVN) and the North Vietnamese Army, in December 1974. But even when this photo was taken, in 1963, the town was strategically important, with North Vietnamese supply lines passing through the area. (1)

The photo appears to show an operation by local self-defense forces. The Willys CJ-3B, with whitewalls and a yellow military plate, suggests some high-ranking officials are present. The Mitsubishi CJ3B-J4 behind it, and the M8 armored car further back, may be ARVN. 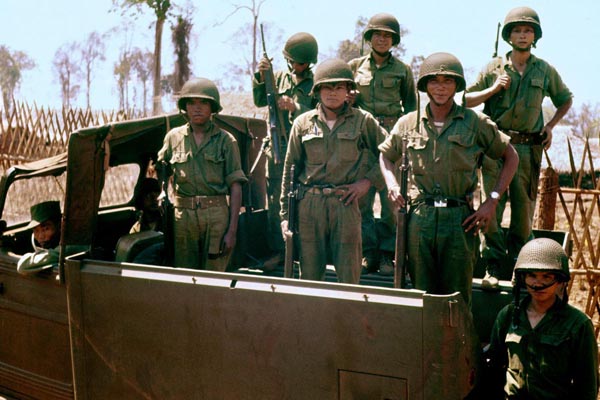 The white hood on the Willys truck in the photo above, indicates a police vehicle. I looked at that truck and this photo for a while before I realized these are probably the first actual photos I have ever seen of a Willys Cargo-Personnel Carrier in use. 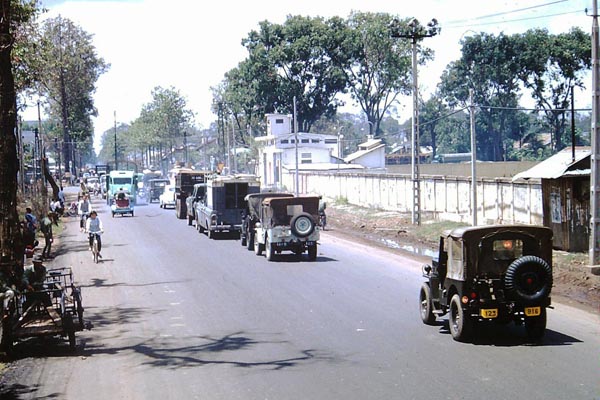 Even in the capital of South Vietnam, it was not a surprise to see three Jeeps in a row. But the all-white J4 seen here is a bit of a mystery -- I'm not sure who it would belong to.

This scene is looking south on Nguyen Van Thoai, known today in Ho Chi Minh City as Ly Thuong Kiet. To Americans in Saigon it was known as Plantation Road, and was a couple of miles south of Tan Son Nhut airbase. In the background here is the Phu Tho racetrack. 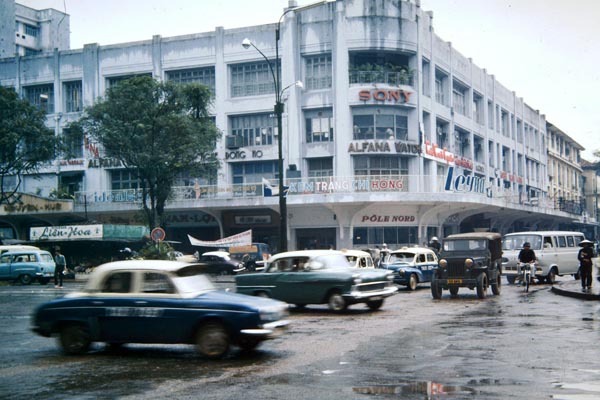 More ubiquitous even than Jeeps in Saigon, were the little Renault 4CV taxis like the one seen beside the Willys here, downtown at the Lam Son traffic circle in 1965. The new Renault Dauphine taxi in the foreground was less common. (4)

The Jeep here has yellow headlight shades -- were these intended for blackout use? 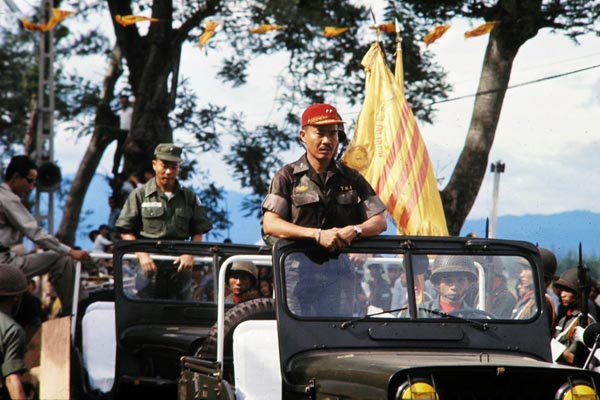 This is an interesting photo, taken in Hué in 1966 by Ted Dexter. (5) A close look reveals that this is Gen. Nguyen Chanh Thi, commander of ARVN's I Corps. He was referred to as "a coup specialist" by The New York Times, being best known for his involvement in many of the frequent coups in the 1960s, before being exiled to the U.S. in a 1966 power struggle. This may be Thi's last public appearance before his exile, which set off a 3-month rebellion against the government. (6) 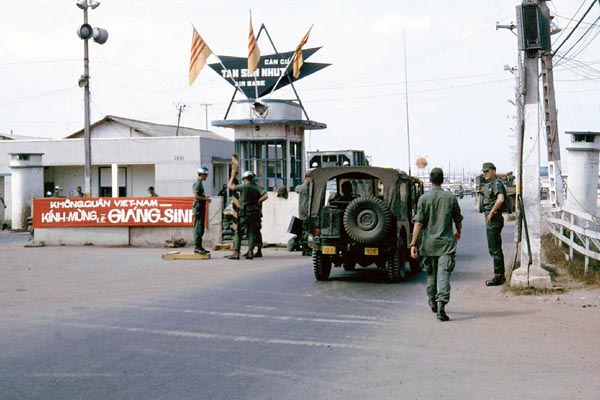 This is probably where General Thi was put on a plane to the U.S. This is the front gate into Tan Son Nhut airbase in Saigon, reportedly in 1968. (7) The red banner is advertising a Vietnamese Air Force Christmas party. If it is in fact 1968, the guards seem remarkably relaxed, considering that the base was heavily damaged by Viet Cong attacks in January and May of that year. (8) 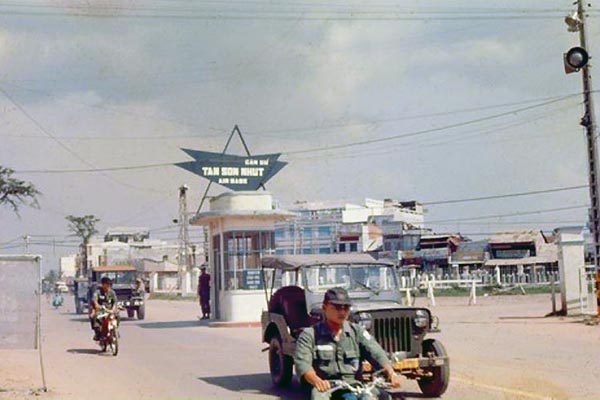 This is the same gate, but with the camera looking off the base. Photographer and date unknown.

Incidentally, according to The Times, General Thi worked in various jobs in the U.S. including motel custodian, until he died in 2007 at the age of 84. But when he was recognized in Vietnamese restaurants, he was treated as a hero. (6) 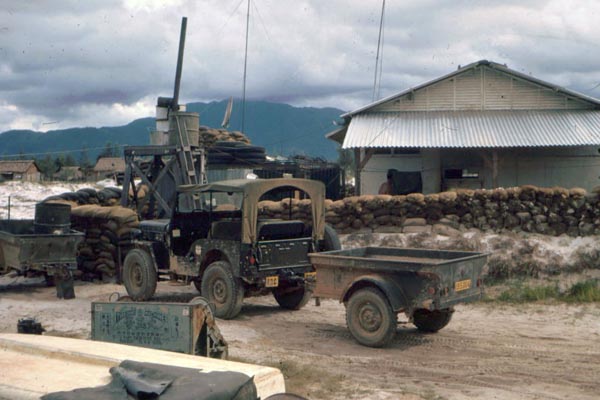 Another busy airfield during the war was at Chu Lai. The U.S. Marine Corps air base here was built from scratch by the Seabees in May 1965, to take some of the pressure off the air base at Da Nang, 50 miles northwest. The first combat mission took off three weeks after the Marines secured the area. (9)

Thanks to bahtah of Naval Mobile Construction Battalion 3 for his photo of an ARVN CJ-3B and trailer in front of the Comm Station. 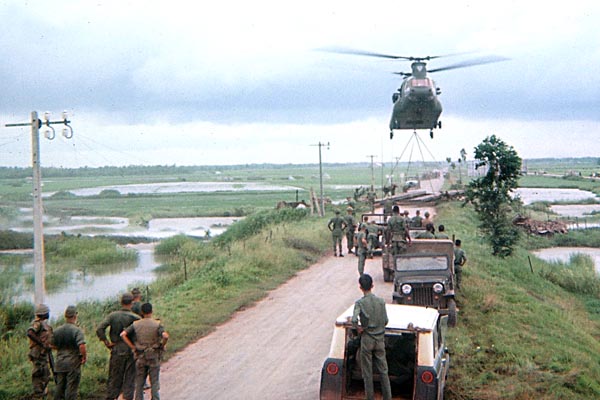 The Army's equivalent of the Seabees was the Combat Engineers. Tom Jackson of the 1st Platoon, C Company, 15th Combat Engineers, took this excellent photo in 1967 as a Chinook lifted in a bridge section to replace an unidentified bridge destroyed by Viet Cong. See also another picture taken seconds earlier (260K JPEG). 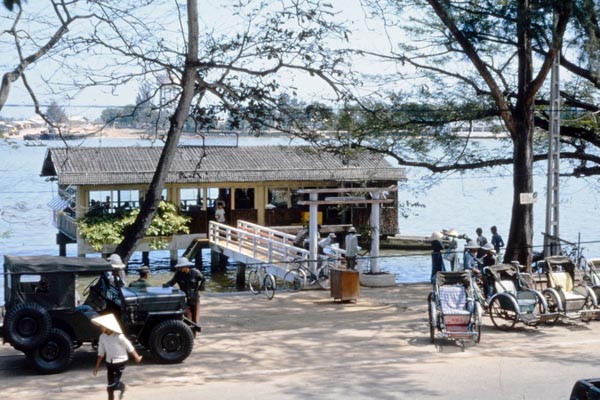 Da Nang was the world's busiest single runway airport in the mid-1960s, with 1,500 landings and takeoffs on peak days. (10) But this picture is a reminder that Da Nang is also a beautiful port city. Thanks to Woody Hibbard for the 1965 photo. 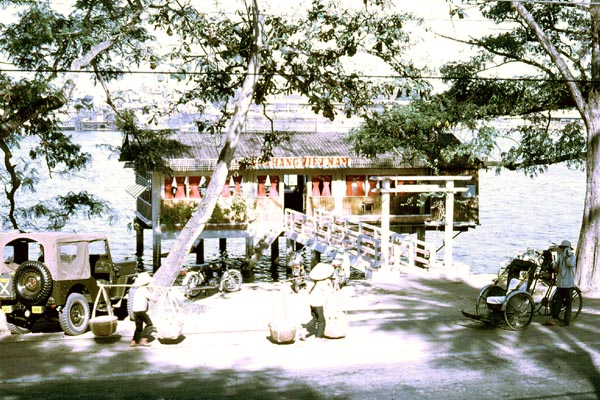 Interestingly, an almost identical photo, reportedly taken three years later, (11) has another Jeep parked in the same spot. Clearly this restaurant was a good place to try and forget the war for a while.

Thanks to Federico Cavedo and all the photographers. -- Derek Redmond