After finishing the body (see Part 1) it was time for the frame and engine. 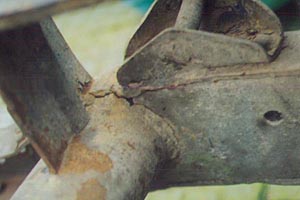 Stripping down the frame was relatively easy -- only two bolts were broken, together with two wrenches. As you can see, the frame had some severe damage on the tube at the front. I think that this 3B was extensively used with a snowplow. Behind the front axle are two mounting lugs welded to the frame. And for some reason the front bumper was missing. Without the front bumper, the tube has taken all the tension on the frame from the front springs and the snowplow. 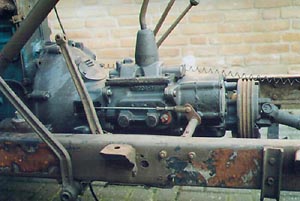 Checking out the gearbox and transfer case, I discovered that the gearbox was completely flooded with a water and oil mixture, causing some bearing damage. I had to replace 3 bearings together with all the oil seals and gaskets. 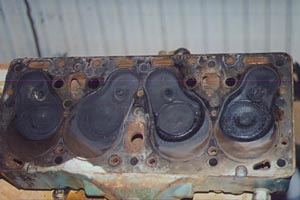 Lifting the cylinder head from the engine I could see that the gasket was leaking (40K JPEG). A replacement gasket and grinding the cylinder head solved that problem. The fuel pump was in bad condition and without a vacuum section (see photos of the left side and right side of the engine, 40K JPEGs). On the pistons were some markings indicating that this engine was equipped with .020 oversized pistons (50K JPEG). Besides the cylinder head gasket, I replaced all the gaskets and oil seals on the engine. 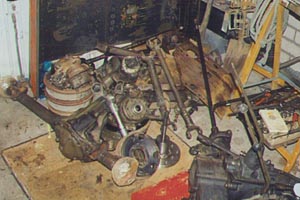 These are all the small parts, axles and brake drums, ready for sandblasting. Near the front, to the right of the parking brake drum and to the left of the gearbox you can see the home made hub-puller I used to pull the hubs from the rear axles. See also the old and new engine mounts (30K JPEG).

Inspection of all the other parts brought some more disappointments: bad shock absorbers, and all four were different types. All four springs also had to be replaced -- the rear ones differing about 2 inches in length, and on the front, one was a hard type and the other a soft type. All four wheel cylinders, master brake cylinder and brake lines were badly rusted, which explains the bad braking on the first test drive (see Part 1). 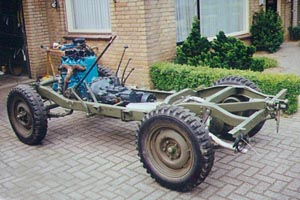 After sandblasting of the frame and the smaller parts, I welded the cracks in the frame and the tube (see a detail photo of the welded section, 40K JPEG). After painting the whole thing at last it was time for some nice work: assemble the frame, engine and axles together (see also a front view photo, 40K JPEG).

Two of my biggest Jeep fans (60K JPEG) couldn't wait for the first test drive. After testing the engine, all was fine except for the carburetor. I think that the new fuel pump gives more pressure than the old one, causing the carburetor to leak. And of course if someone says that the muffler isn't in the right place he is right, but over here in the Netherlands we are paying about $ 1.20 for a liter of benzine. So one of the first things I will do after getting the license plates is build an LPG tank under the frame behind the rear axle and convert the engine from benzine to LPG, and that will save me about the half of the money at the gas station.

Most of the parts needed for the frame came from: REOMIE Erlecomsedam 34 6576 JW Ooij Netherlands.

By the time you read this, the tub is already on the frame complete with fenders and radiator guard. The wiring harness is almost ready, so the third chapter is almost on its way. Greetings and long happy driving with your CJ-3B. -- Piet Versleijen

Thanks to Piet for the continued story and detailed photos. -- Derek Redmond

Part 3: Putting it Together is now online.

Last updated 12 May 2001 by Derek Redmond redmond@cj3b.info
https://cj3b.info/Military/Versleijen2.html
All content not credited and previously copyright, is copyright Derek Redmond