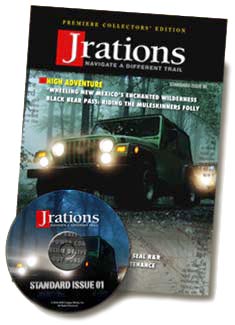 In 2006 it was almost ten years since the "Premiere Collectors' Edition" of Jp magazine hit the newsstands. During that time, corporate takeovers, changes in staff and pressure from advertisers took Jp toward an almost exclusive focus on a target readership interested in recent and highly modified Jeeps.

The people who originally created Jp were watching this, and planning their new publication aimed at the interests of the larger group of owners of Jeeps old and new. J rations was the result of that planning, and it too combined some old and new elements: articles on Jeep history, mechanics and trail rides -- but in a new multi-media format.

It's standard procedure these days for a magazine to also sponsor a web site, but the new multimedia twist from J rations was that the magazine itself came with an interactive CD-ROM loaded with additional text, photos and video.

Unfortunately J rations only published a few issues before ceasing publication due to market conditions. Here were my impressions of their first issue: 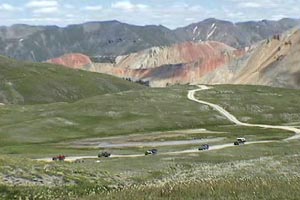 The trail ride coverage benefits from the video clips, which provide a "you are there" feeling that still photos just can't match. A trip along the Black Bear trail in Colorado (right) includes great scenery and history, as well as Jeeps. 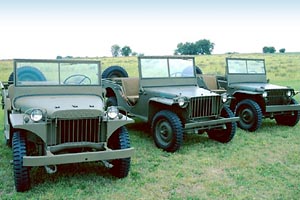 Sorry to say there are no CJ-3Bs in Standard Issue 1, but several features on older Jeeps suggest that coverage of the classics will be a regular part of J rations. Jim Allen contributes a Q & A column on classic Jeeps, as well as Part 1 of a major retrospective on the development of the first jeeps during WWII. The CD includes a bunch of his photos that wouldn't fit in the print edition, such as a restored Willys MA, Bantam BRC40 and Ford GP posing together (right). 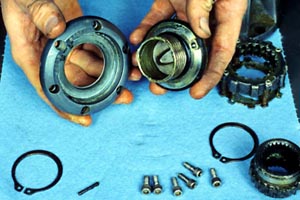 The CD also provides room for expanded versions of tech articles that will be useful to owners of older Jeeps, such as how to service manual locking hubs. They're in PDF format, perfect for printing if you want a paper copy to take into the garage.
The J rations magazine itself is glossy and nicely designed, and is perfect for the living room coffee table. Editor Rob Reaser, along with Wayne and Lisa Godfrey and Steve Statham, all of whom were involved in the original Jp, maintains a similar editorial balance in the new venture. That is, there are a few general outdoorsy-type articles, and product reviews of items like tents, mixed in with the Jeep-specific material. Personally I'm not really interested in a "lifestyle" magazine, but the combination works reasonably smoothly, and I expect the staff will be receptive to readers' comments and requests.

Unfortunately J rations only published a few issues before ceasing publication due to market conditions. Keep your eye open, and copies might turn up at swap meets or flea markets. -- Derek Redmond