This Willys-Overland Export Corporation brochure was used to introduce the model CJ-3B to the world. The copy seen here dates from the availability of the CJ-3B in the Netherlands in January 1953, and was found by Jan Hogendoorn. Like the 1953-54 U.S. brochures, it does not use the "Universal Jeep" name, opting instead simply for "Jeep." It's not clear whether dropping the Universal part of the name was a conscious marketing decision or not, because it soon returned in other CJ-3B Advertising and Literature. 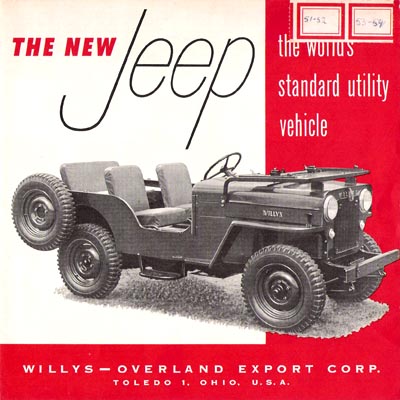 The Export Corp. clearly had their own marketing department or ad agency, who decided on the phrase "The World's Standard Utility Vehicle" rather than "The World's Most Useful Vehicle" as found on the domestic brochures.

The visual design is also completely different from what was being used in North America (but similar to a Hotchkiss ad in French for La Jeep Francaise, 90K JPEG.) The windshield-down photo was seldom used in domestic advertising, perhaps because it accentuated the high-hood look which Kaiser-Willys preferred to play down. 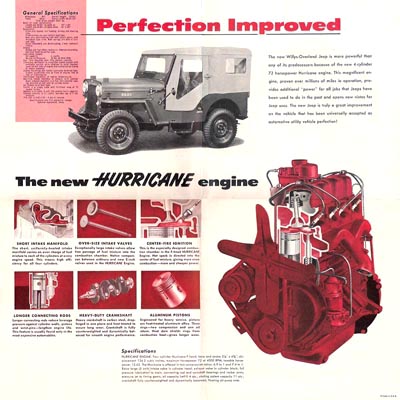 The brochure is square, and folds open in four sections to form a larger square with the Headline "Perfection Improved." The text and pictures focus almost entirely on the new Hurricane F-head engine. There's a nice illustration of the engine, with a cutaway to show the operation of the overhead valves.

The large copy (220K JPEG) of the open brochure makes most of the text easily readable. The brochure was in English, marked "Printed in USA," and probably intended for use in a variety of countries.

What is most surprising about the brochure is that it doesn't even mention 4-wheel drive. Willys domestic brochures of the era typically included a detailed description of "The Willys 4-Wheel Drive Principle". It's not clear why the Export Corp. didn't seem to consider 4WD a big selling point. 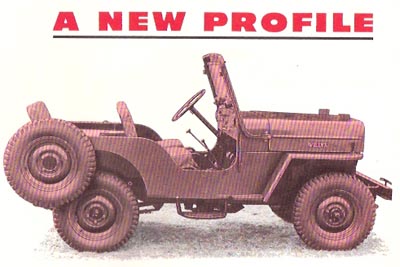 One quadrant of the folded brochure features the new high-hood profile, an aspect of the new model which was never highlighted in domestic U.S. advertising, although the same photo was in fact used in the early U.S. brochures.

Perhaps this bold presentation of the new look contributed to the CJ-3B being accepted as the most popular Jeep around the world for many years, whereas in North America it was always seen as a grudging modification of the early flatfenders, filling the gap until Willys was finally able to market the civilian version of the M38A1, the "biscuit-fender" CJ-5.

Thanks to Jan Hogendoorn for scanning the brochure. -- Derek Redmond