My Life, My Adventure
(or, My Jeep is Smokin') 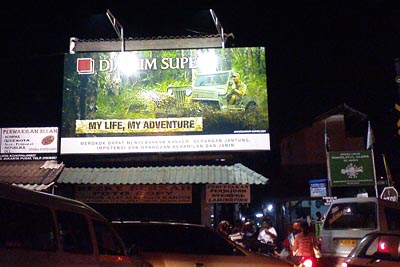 In the middle of a traffic jam in Jakarta, Indonesia, on a hot night in early 2008, Roi Permadi grabbed this photo for us, of a billboard from the latest advertising campaign for Djarum Super cigarettes: "My Life, My Adventure."

Ever since the Marlboro Man successfully transformed a brand previously aimed at women into a masculine icon, macho lifestyle ads have been a popular way to sell smokes. And what could be more macho than a Willys in the back country? See also the 1980 campaign for Camels, in CJ-3Bs in Advertising.

Djarum Super is one of the biggest brands of clove cigarettes, also known as kreteks, which contain a blend of tobacco and cloves and are very popular in Indonesia. For more details on kreteks, see Wikipedia.

The Jeep photo was also featured for a while on a Djarum Super website:

Thanks to Roi Permadi for the heads up on this exploitation of the cool factor of a CJ-3B. -- Derek Redmond