The first Katangese operations against the Baluba had shown that some additional protection would be desirable for the vehicles of the mobile groups. The Baluba mainly had rifles or even bows and arrows but were skilled at ambushes, and sometimes they made a lucky shot. Katanga did have a few old armored cars but these were badly worn and not suited for the bush. Many of the Belgians in Katanga remembered the armored Willys MBs used in Belgium by the US Army in World War II and it would have been an obvious solution to do something similar in Katanga.

Katanga used only two types of vehicles as a basis for their new armored cars: the Willys CJ-6 and the Minerva TT. There were no armored CJ-3Bs or other older Jeep versions, presumably because those were already approaching the end of their service life. Some details of Katanga's armored Jeeps are still provided here, to give a rounded account. There were three basic patterns for these Jeeps and they are described below. The total number produced was a few dozen only.

The first armored vehicles were produced in the town of Albertville, on Lake Tanganyika (see the Congo map), for Groupe Mobile "A". These were almost all Minervas but a small number of CJ-6s were also converted, for use as command Jeeps. 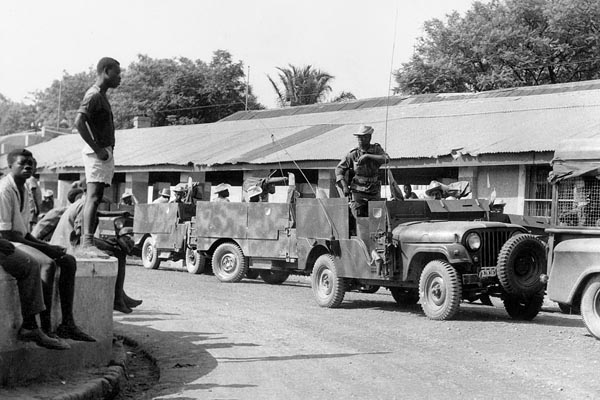 Part of G.M. "A" pausing in a town during operations. The cars in the background are all Minerva TTs while the command vehicle is a Jeep. This conversion was of a simpler design than the other two patterns and instead of armored doors, it just had small plates sticking out on the side, at an angle. There was a hinged plate with a vision slit that could be folded up in front of the driver, as needed. The L-shaped indicators on the front fenders show that it was ex Force Publique. Also note the pistol holster strapped to the radio on the side! (Photo via Guy Devresse) 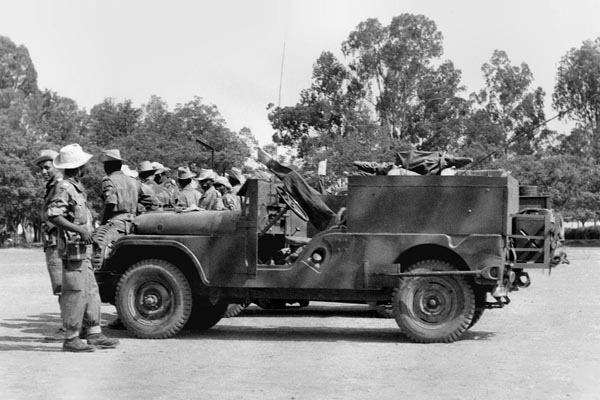 A second photo shows the same, or a similar Jeep from the left-hand side. The simple, box-like armor body is clearly visible, together with the external storage rack at the rear, the spare wheel having been moved to the front. There is a machine gun mounted at the front but the ones that look like they are fitted in the rear actually belong to vehicles behind the Jeep. (Photo via Guy Devresse)

The first major batch of armored Jeeps were converted by the CFL railroad workshops in the town of Kongolo, in the very north of Katanga. Their first prototype was a Minerva, followed by a number of CJ-6s (as well as more Minervas) in December 1960.

The Kongolo Jeeps were built by welding steel plates on to the "step" along the top of the rear body, like those in Albertville. This means there was no additional protection inside the existing body panels. Steel doors and a low steel windshield -- without a fold-up extra plate for the driver -- were also fitted while the tail gate was welded shut. 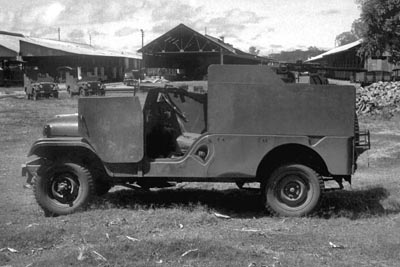 This "factory shot", taken at the railroad workshops, shows the standard gun Jeep variant of the Kongolo pattern. This had a pylon for a .30-cal. machine gun in the rear and a mounting for a BAR gun in front of the passenger. In the background are two of the recoilless rifle variants (see below). (Photo © Georges Kockelberg/www.cegesoma.be ref.280862) 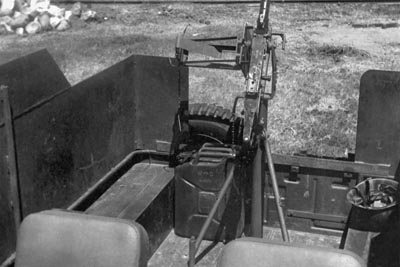 A photo of the inside of the body shows the supports on the inside and the extra pieces welded on top of the front part of the armor. (Photo © Georges Kockelberg/www.cegesoma.be ref.280709) 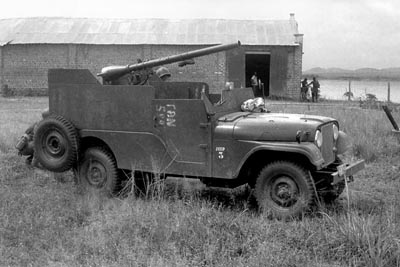 A second Kongolo variant was fitted with a 75 mm recoilless rifle in the back. In this case the extra top armor pieces were placed at the rear to give a better field of fire to the sides. The opening at the rear was wider while the spare wheel was moved to the right-hand side to avoid having it blown off by the back-blast of the gun. (Photo © Georges Kockelberg/www.cegesoma.be ref. 280859) 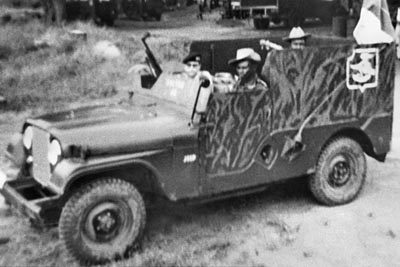 There was also a third, command variant, which had higher side armor all around the rear and was fitted with radios. Like all the Kongolo versions, it was mainly used by Groupe Mobile "C". This Jeep seen in April 1961 carried an emblem with a witch on a broom and the text Kifakyio ("All Cleaned Out"), added after the area around Kongolo had been cleared. (Photo via Daniel Despas) 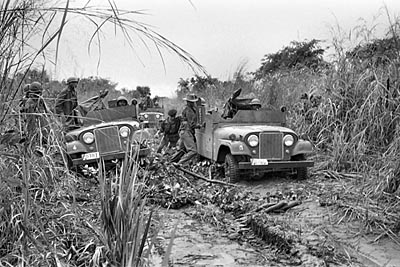 The added weight of the plating and weapons made the armored Jeeps permanently overloaded and their mobility definitely suffered. It needed many hands to get them unstuck when the CJ-6s got bogged down in the mud during the wet season. (Photo © Pierre Promil)

A second main version of the armored Jeep was produced in the capital Elisabethville (see the Congo map) in January 1961, in time for the renewed offensive against the Baluba that started the following month. This pattern was used mainly by mobile groups "B" and "D". None seem to have been fitted with recoilless rifles.

The general principle was the same as for the earlier patterns, but in this case the armor plating was fitted on the outside of the body sides and extended down to the floor level, giving a bit better protection. There was usually a C-beam or plate fitted along the top, presumably as a stiffener. 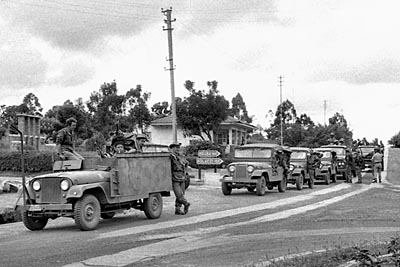 An armored CJ-6 heading up a section of Groupe Mobile "B" at Lubudi, just before the start of Operation Banquise in February 1961. This particular Jeep has a fold-up extra armor plate on the right-hand side of the front, indicating that it is a right-hand drive example. It has a very prominent wire cutter welded to the bumper and an empty radio rack on the side. (Photo Pierre Promil) 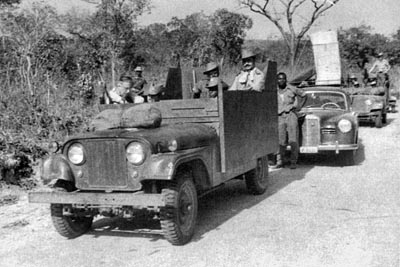 There was some variation in the body styles of the Elisabethville pattern as well, like this Jeep -- likely of Groupe Mobile "D" -- which lacked the stiffener at the top and instead had higher plating at the rear. It is a left-hand drive vehicle and has the large indicator lights on the fenders seen on most Katangese CJ-6s. (Photo via Francois Pletain) 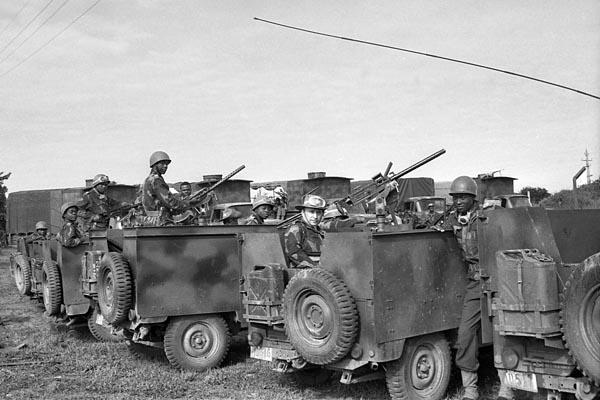 This view of the rear ends of several Jeeps lined up on parade shows the minor differences between the individual vehicles; the Elisabethville Jeeps were clearly hand-built to a higher degree than the Kongolo versions, which seem to have had their armor cut from templates. These CJ-6s all have a standard external bin to hold a jerry can, next to the spare wheel. (Photo © Pierre Promil) 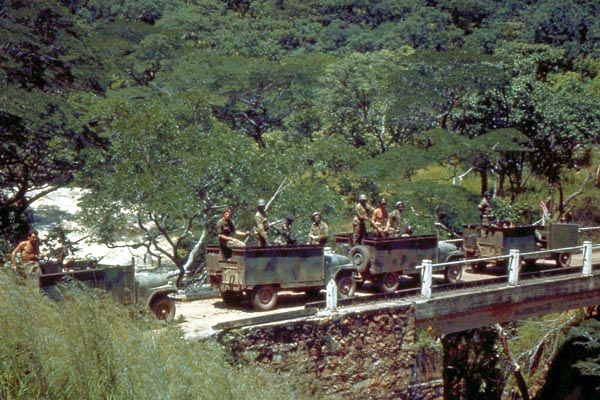 A rare color image of the armored Jeeps of Groupe Mobile B on a bridge between Mitwaba and Manono, perhaps during Operation Mambo in March 1961. The Jeeps were all finished in individual, blotchy camouflage schemes which blended excellently with the terrain in northern Katanga. (Photo via Guy Devresse)

Once the operations against the Baluba were concluded in the spring of 1961, the armored Jeeps saw little use. Indeed, by this time most of them were worn out since the extra weight played havoc with the suspension and transmission on the poor Katangese roads and the average life-span of these vehicles was only around three months. A few probably survived on official strength for another year or more but none are known to have seen any operational use after mid 1961.

Continue to Part 5: Fighting the UN or return to the Table of Contents.