If you're reading this in the winter in North America or northern Europe, maybe you've come to CJ3B.info looking for ideas of places to visit in the sunny south. Well, probably not, but I've got a good one for you anyway. Saba (pronounced "sayba") is the smallest island of the former Netherlands Antilles. It's a 5-square-mile (13 km2) dot in the Caribbean Sea, with a single road and lush mountain forests (360K JPEG)(1) dominated by a dormant volcano. There is excellent scuba diving, snorkeling and hiking, giving this tiny spot the nickname "The Unspoiled Queen of the Caribbean." And there are probably a few old flatfender Jeeps still kicking around. Read on, for the story of how they got there, and how one of them served as a royal limousine. Numbered footnotes are at the bottom of the page. -- Derek Redmond 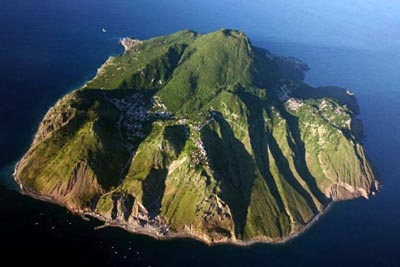 Dutch is the official language, but English is the principal language spoken by the approximately 2000 inhabitants. Since 2011, the U.S. dollar has been the official currency, replacing the guilder. The island of Saba is relatively new to the tourism industry, and its airport's 1300-foot (400m) landing strip is widely known as the shortest commercial runway in the world. (2) 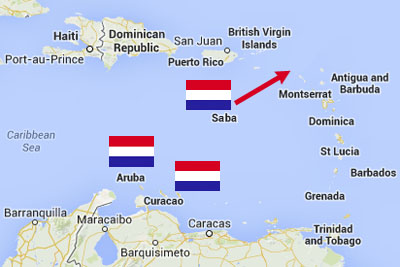 In October 1955, Queen Juliana of the Netherlands and her husband Prince Bernhard (330K JPEG) undertook the first royal tour of their six Caribbean islands, as well as Suriname on the northeast corner of the South American mainland (see the complete map, 80K JPEG.) The former colonies had just become an independent country known as the Netherlands Antilles. (They are now the separate countries of Suriname, Aruba, and Curaçao & St. Maarten, plus the special municipalities of Bonaire, St. Eustatius and Saba.) (3)

(Note: Saba is located northwest of the slightly larger St. Eustatius. I found that Google Maps doesn't actually recognize the name Saba if you search for it, but if you look for St. Eustatius and zoom out a few steps, you'll find Saba. You can then zoom in and see lots of detail in the satellite photo, including the beach on the south side of the island, seen in the photos below.)

When the Queen reached Saba, she found Willys Jeeps waiting for her and her entourage. The story of bringing Jeeps to the island is told by Saba historian Will Johnson in his blog The Saba Islander. He says that between 1629 and 1972 the only way for people or cargo to get onto the rugged island was by small boat, on the beaches at Fort Bay or Ladder Bay. 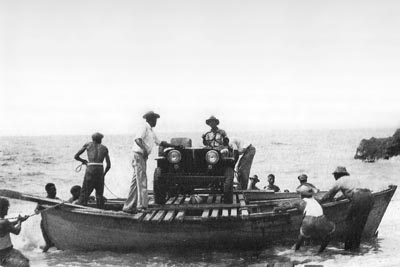 Johnson recounts the arrival (in this photo) of the first vehicle on Saba, a CJ-2A driven by Oliver Zagers, on 17 March 1947: "Someone came up with the idea to strap two lighter boats together, put a platform on top of the boats for the motor vehicle to rest on, and with long ropes from the shore pull the contraption all the way to shore. There were also two ramps which, when the boat reached the shore, would quickly be put against the two boats and the motor vehicle would be raced down the ramps onto the rocks and with the assistance of the men on shore be pushed quickly up to the road. Between 1947 and 1972 several hundred motor vehicles were landed on Saba this way and nary a one was lost...." (4)

Amazingly, Johnson found a color photo of the arrival of another CJ-2A, with Nederville "Neddie" Heyliger in the white shirt overseeing the landing: 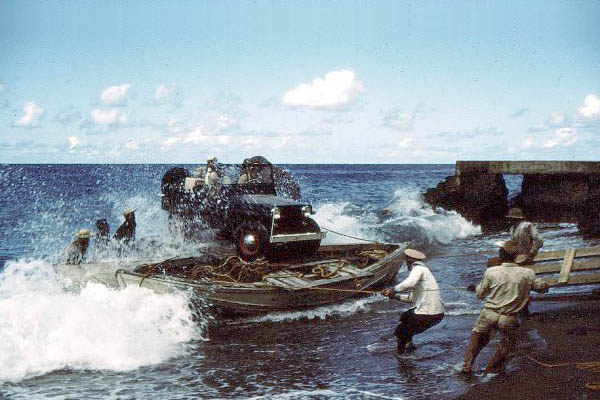 Johnson describes how when a boat approached the shore, "The Captain had to count the waves and make the decision when to give the order to row full speed towards the shore before the next wave caught up with you and swamped the boat. Sometimes the Captain would wait outside the breakers for what seemed forever and then suddenly would shout out the command 'Take her now!' or something of the sort. As a passenger your greatest concern was to make it to the rocky shore safely and out of the boat as quick as possible." (4) 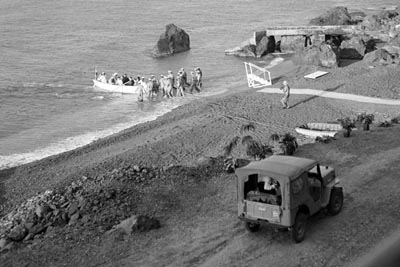 Luckily the weather was sunny and the sea calm when Queen Juliana and Prince Bernhard arrived on 26 October 1955 at the same spot where the Jeeps came in on Fort Bay. This photo shows the landing of an advance party. A freshly painted set of steps is ready to assist the Queen in disembarking, and one brand-new-looking Willys CJ-3B is standing by.

These photos are courtesy of the Netherlands Nationaal Archief; the photographer was Willem van de Poll. (5) 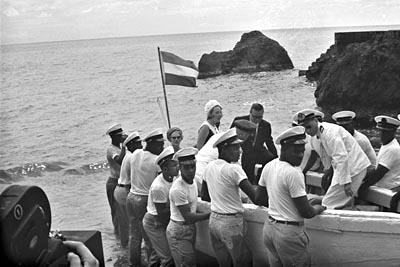 A little later another boat comes in. The Queen sits regally in the stern with her sunglasses on, as the beach crew pushes the boat up onto the shore and looks around wondering who's going to bring the staircase over.

The camera in the lower left indicates that newsreel footage was shot on 35mm film, but I haven't had any luck finding it (although there is other footage from this trip.) 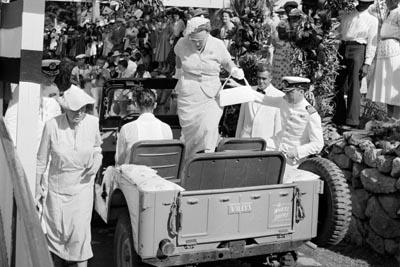 There are no fancy steps to help Queen Juliana climb into her limousine for a parade through Saba's capital, known as "The Bottom." But spit and polish has obviously been applied, and some rear wheelhouse cushions have been custom made. An archway above her (see the full-size photo, 300K JPEG) has a sign reading "Leve de Koningin" (Long live the Queen.) 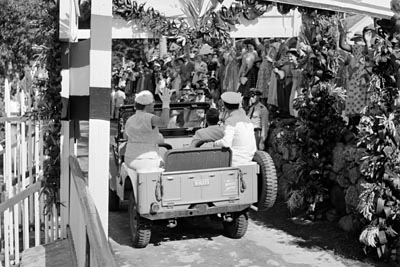 The royal couple wave at the waiting crowd, who enthusiastically wave back. The Queen seems quite comfortable perched in the back of the CJ-3B, but it does look like she's got a good grip on the front seat.

Since the island only has one main road, the Jeep doesn't really need turn signals, which were still optional in 1955, so it has only one taillight. 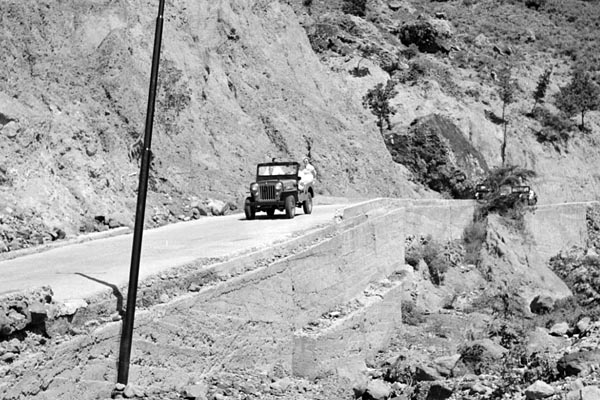 Maybe Juliana didn't realize she was going to have to sit up there, not just for the parade, but for the whole trip along the main road, aptly named "The Road." In 1955 The Road had been under construction for 17 years and was almost complete, despite the opinions of Dutch and Swiss engineers that it couldn't be done. As Wikipedia says, "Driving 'The Road' is considered to be a daunting task, and the curves... are extremely difficult to negotiate." (6) 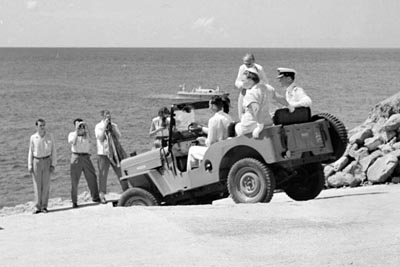 The Queen might have been thinking "Goddank!" ("Thank heaven!") when they got back safely to Fort Bay, but she kept a smile on her face for the photographers, and a death grip on the Willys.

The moment of glory for these Jeeps was over; they probably spent many more years shuttling government employees around on the island. I would think there's a good chance they're still there. 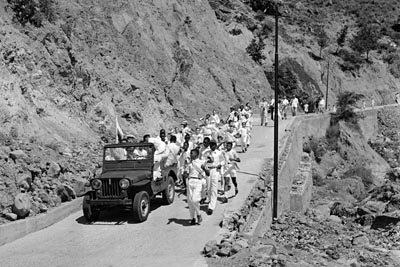 A CJ-3A that was a little older and more beat-up was relegated to leading the local schoolkids down for the sendoff. Looks like the press bringing up the rear. 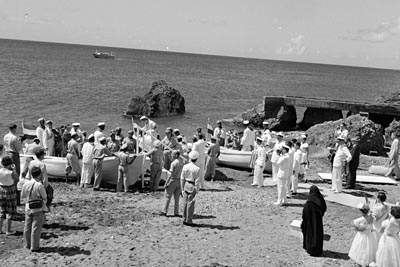 There is a good crowd, including what appears to be a schoolgirl choir, to watch the Queen climb back into her boat. She didn't have far to go; the Dutch cruiser HNLMS De Ruyter (C801) (200K JPEG) was sitting just offshore. 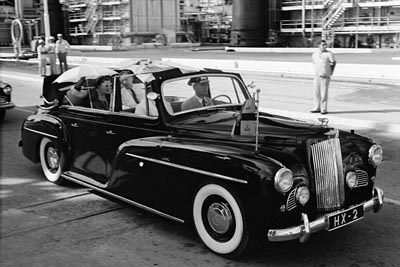 Queen Juliana was accustomed to riding in more stately vehicles when they suited the occasion; she brought her custom 1951 Austin Sheerline Princess convertible along on this trip. It's seen here in St. Nicholas, Aruba, flying the orange and blue Royal Standard. And it wasn't the only vehicle -- she also brought something a little fancier, complete with horses (330K JPEG).

But in fact she sold the Austin limo in 1958 because she felt it was too big, (7) and at home in the Netherlands she was often seen riding a bicycle. (8) 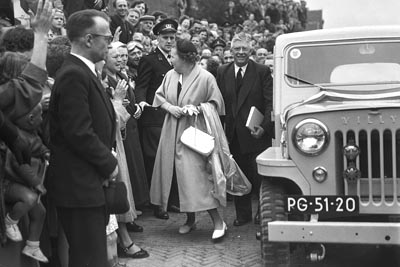 And she was also familiar with Jeeps; this photo by Joop van Bilsen shows her with Prince Bernhard (left) on 21 June 1954, travelling by royal CJ-3B to visit areas in the Netherlands hit by devastating flooding the year before, when dikes holding back the Atlantic Ocean gave way. Check out the custom fender skirt on the Jeep. (9)

Queen Juliana was born in 1909 and was monarch from 1948 to 1980, when she abdicated in favor of her daughter, Queen Beatrix. Her reign was filled with dramatic events, both national and personal, but she was always down-to-earth, and beloved by the Dutch until her death in 2004. (10) 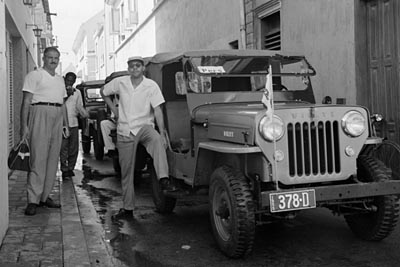 The Queen's 1955 trip to the Netherlands Antilles was a great success; Dutch royalty had long been popular in the colonies, partly as a result of their decree to end slavery there in 1863, but no reigning monarch had ever visited. She was enthusiastically welcomed by the local population of all the islands, and the trip was widely reported in the Dutch press. In Willemstad, Curaçao, the capital of the Netherlands Antilles, reporters found Jeeps ready for them. The flag and windshield sticker identify this CJ-3B as "pers" (press). 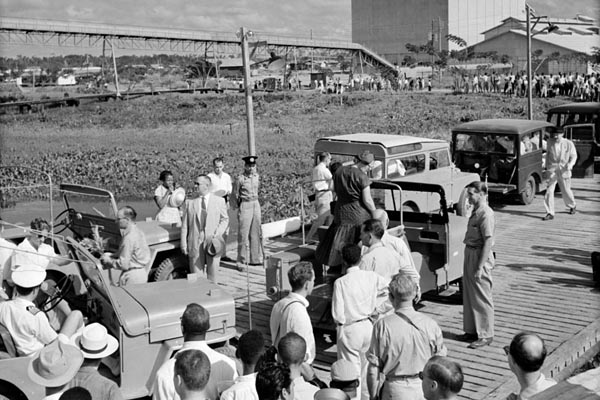 In Suriname they seem to have her standing up in the back of a CJ-5, with only a top bow to hold on to! At least there's a step mounted on the tailgate to make egress easier. There's a big entourage packed into Land Rovers and Willys wagons, arriving with her to take a look at a rice storage facility in Wageningen, but there appears to be some kind of delay. A CJ-3A and CJ-3B are following the CJ-5, which was a brand new model in 1955, fresh from Toledo. 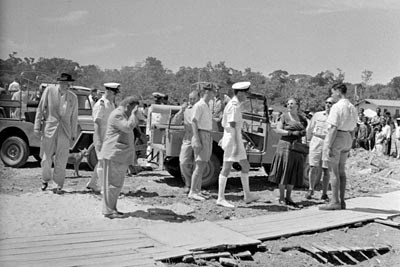 A LIFE magazine article from 31 October 1955 about the visit to Curaçao says that most of the island's 114,700 people turned out to see Juliana in 96-degree-F (36C) temperatures, (11) and it may have been even hotter in Suriname, closer to the equator (see the map, 80K JPEG). The Dutch officers and many of the others in this picture are wearing shorts, and it looks like the fellow in the suit wishes he was in shorts too. 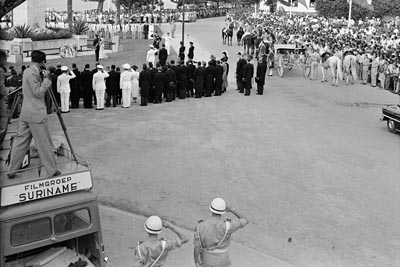 It wasn't all Jeeps in Suriname though; the calèche and its team of six horses did come ashore in the capital Paramaribo, for a procession to lay a wreath at the War Memorial, where the local newsreel crew was set up on top of a Willys station wagon. 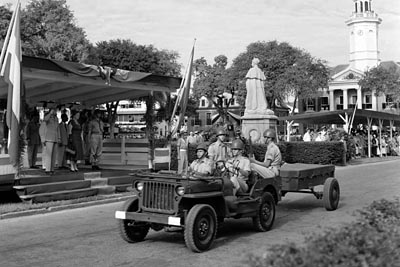 On 4 November, near the end of her trip, Juliana reviewed a parade in Paramaribo's Orange Square, with a statue of her mother Queen Wilhelmina standing in the background. The Queen was probably happy that for this parade, somebody else got to perch in the back of a Jeep.

It was common in 1955 for Dutch military units to still use the Willys MB, since the contract to buy 4,000 NEKAF M38A1s was not signed until that year. 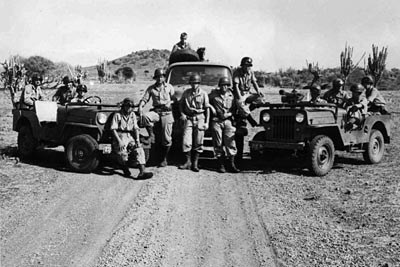 Some years later, this photo of Dutch Marines in Curaçao showed that they were using CJ-3Bs rather than the NEKAF M38A1 which had become the primary quarter-ton of the Dutch military. This TLV unit (in Dutch, a recoilless rifle is "Terugstootloze Vuurmond" or TLV) was photographed in 1962 or 1963. (12)

It seems possible that military units as well as other government services in the Netherlands Antilles were supplied with vehicles directly from Willys-Overland Export in the U.S., rather than from NEKAF, across the Atlantic in Rotterdam.

It's interesting to see another corner of the world where the Willys CJ-3B was a part of history. I'm looking forward to the chance to visit Saba Island and maybe come home with a photo of Juliana's Jeep. For details on travelling there, see the Saba Tourist Bureau.

Thanks to Federico Cavedo for finding Willem van de Poll's photos at the Nationaal Archief, and to Will Johnson for photos from his blog The Saba Islander. -- Derek Redmond