As Vladimir Putin's 2014 Russian Winter Olympics unfolded, CJ3B.info looked back at an earlier Russian strongman, Nikita Krushchev. The photos were found in the LIFE photo archive by Federico Cavedo; for other references see the numbered footnotes at the bottom of the page. -- Derek Redmond

Soviet Premier Krushchev was visiting the equatorial island nation of Indonesia, while the Soviet Union was dominating the medal count at the 1960 Winter Olympics in Squaw Valley, California. (Despite the 21 medals for the USSR in that Olympics, a bright spot for Americans was the United States hockey team winning unexpected gold, defeating the favored Canadian and Soviet teams. This was the first Olympic gold medal in ice hockey for the U.S.) (1) 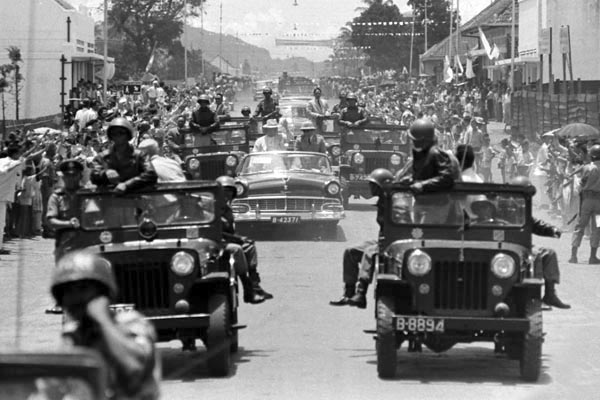 These photos of Krushchev (left) and Indonesian President Sukarno (right) being escorted by a fleet of military CJ-3Bs, were taken for LIFE magazine by John Dominis.

February 1960 was the height of the Cold War, just a few months before an American U-2 spy plane was shot down over Russia. Indonesia was a non-aligned country, and Sukarno was being friendly with both the US and USSR, trying to use both to solidify his power at home. (2) 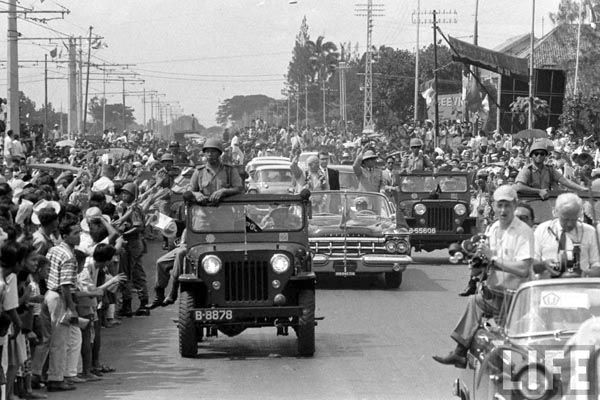 Sukarno was well-known for his fleet of Presidential limousines, including his latest, the 1959 Crown Imperial four-door convertible seen in this photo.(3) Sukarno's taste in vehicles certainly ran to American cars, not Russian. The Jeeps may have been provided to the National Police by the American government's MDAP program, although Indonesia accepted very little American military assistance. (4) 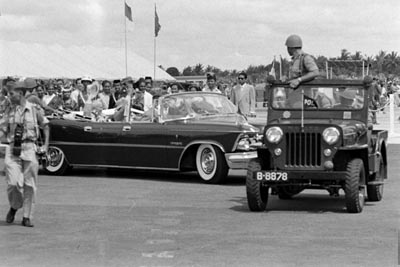 The flags of Indonesia (above) and the USSR fly in the background of this photo, as well as on the front of the limo. An interesting detail about the dark red Crown Imperial is that its rear fins were cut down flat on Sukarno's instructions.(5) 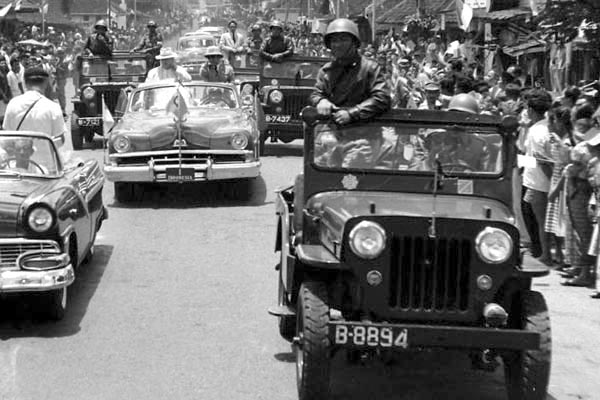 During the course of the visit, Kruschev and Sukarno also rode in another of his Presidential limousines, a coppertone 1951 Lincoln Cosmopolitan convertible. It carried the same "Indonesia 1" license plate and the two nations' flags on the front corners. Thanks to Lutfi Solihin, current owner of the car, for identifying it.

A similar 1950 Lincoln convertible had been used by U.S. President Eisenhower (80K JPEG).

In the photo above, Krushchev seems to be wiping the sweat from his neck. In his memoirs, he wrote at some length about his visit to the country, including the hot weather: "A huge number of people came out in the streets. And immediately Indonesia made a very powerful impression on us with its natural beauty and human warmth. The tropical heat, on the other hand, had a stupefying effect on us... we were soaked with perspiration from head to foot, and it was almost impossible to breathe, so dense and oppressive was the atmosphere." (7) 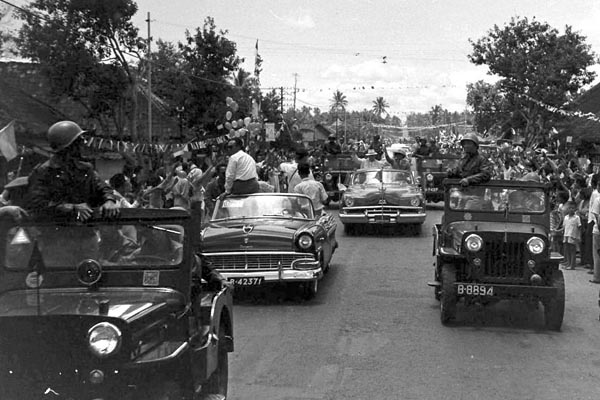 The world press was watching Krushchev's visit. On 19 February, the Toledo Blade newspaper had a page 2 headline (350K JPEG) "Kruschev Off On 1,400-Mile Indonesia Tour," and reported that temperatures in the mountain city of Bogor were lower than in the capital of Jakarta. (But the headline on page 1 (500K JPEG) was the blizzard hitting the eastern United States.)

The photo above gives a good look at the Ford Fairlane which carried press cameramen covering the parades through Indonesia. It's a bit of a mystery why this Ford convertible used by the photographers, is the one actually carrying the Premier and President in the photo at the top of the page. Did the Imperial's hemi V8 overheat as it crawled along in the sun, requiring them to commandeer the press car? It's a detail we may never know. 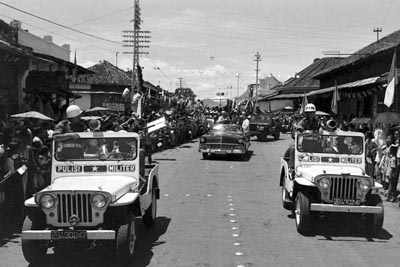 The photographers in the Fairlane are seen again here, behind a nice pair of CJ-3As labelled "Polisi Militer."

The "Pol" flags on the hoods of some of the CJ-3Bs above, may indicate that they belong to the National Police rather than the military. 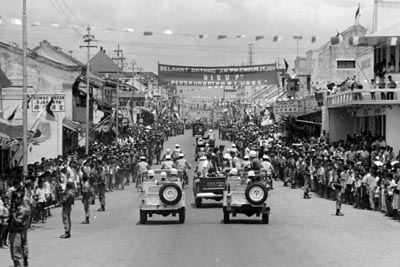 Other Jeeps in the LIFE photos include an export CJ-5 (200K JPEG) and even an M38A1 (200K JPEG) in a photo where some of the guys in the press car look more like cheerleaders than reporters.

Following Krushchev's visit, Sukarno travelled in 1961 to the USSR, and then directly on to see John F. Kennedy in the United States, still playing the field.
Sukarno's balancing of Communist and anti-Communist domestic supporters came to and end in 1965, when a failed coup was blamed on the Communist party by the army, and hundreds of thousands of Communist sympathizers were slaughtered. (9) Sukarno was replaced as President by General Suharto for the next 30 years.

Meanwhile, Nikita Krushchev was peacefully deposed as Premier, not long after the Soviet Union once again won the lion's share of the medals (25, including 11 gold) at the Innsbruck Winter Olympics in 1964. (10)

A book of condolences signed by Nikita Kruschev following the assassination of John F. Kennedy, is in the Ward M. Canaday Center for Special Collections at the University of Toledo. From the American embassy in Moscow, it is part of a collection of documents left by Foy Kohler, appointed by Kennedy as ambassador to the Soviet Union. (11)

Thanks to Federico Cavedo and the LIFE photo archive for the photos. -- Derek Redmond