Jeeps of the Eisenhower
Inauguration Parade, 1953 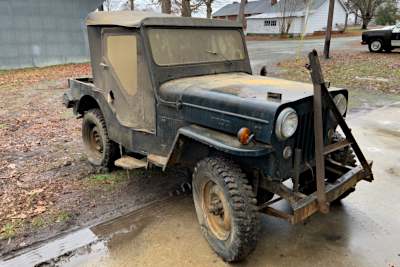 Just in time for the 67th anniversary of the 1953 Inauguration parade on 20 January, a second surviving Jeep has turned up, from the more than 50 white CJ-3Bs which pulled floats in the parade!

It belongs to Keron Parker in North Carolina, who says, "It was purchased in the 1960s at a North Carolina surplus auction by my Dad, a WWII veteran who passed away in 2006. He always told the story that at the auction he was told it had originally been used by President Eisenhower as a parade vehicle, and it was originally white before they painted it dark green. But we were never sure about that story until my son found your article on CJ3B.info." 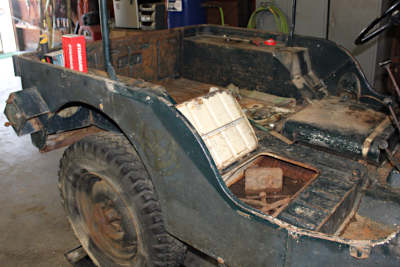 "We always used the Jeep on our farm and I learned to drive on it. It has been in a shed and not touched since the late 90s until this week when my son decided to get it out and work on it this winter."

The original factory white paint is still visible inside the toolbox. Thanks to Keron and Casey Parker for the photos. 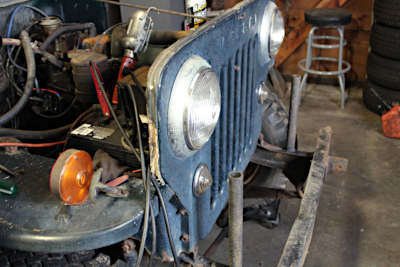 The flag holders still welded to the front of the frame identify it as one of the parade Jeeps seen below. The serial number (400K JPEG) is very close to that of the other known surviving Jeep, seen at the bottom of this page.

Dwight D. "Ike" Eisenhower's first term as 34th President of the United States was inaugurated in Washington DC on 20 January 1953, and the occasion was celebrated with a parade from the U.S. Capitol to the White House reportedly lasting 2-1/2 hours (1) or 4-1/2 hours. (2) Sources agree it was the longest inaugural parade ever held, witnessed by an estimated 1 million people, of whom 60,000 were in grandstand seats with tickets (65K JPEG) ranging in price from $3 to $15. About 22,000 service men and women and 5,000 civilians were in the parade, along with tanks and artillery, 59 floats, 65 bands, 350 horses, 3 elephants, and an Alaskan dog team.

It had apparently already become a tradition for Jeeps to pull the floats in inaugural parades. Photos I have seen of President Truman's 1949 inauguration show dark-colored CJ-3As, and photos from later parades in the 1950s and 60's show red or blue CJ-5 Jeeps. For the 1953 parade, Willys Motors supplied over 50 of its new CJ-3B Universal Jeeps, with special all-white factory paint jobs. CJ3B.info now has photos from 2015 of one of those Jeeps, which has survived in its original paint (see below). 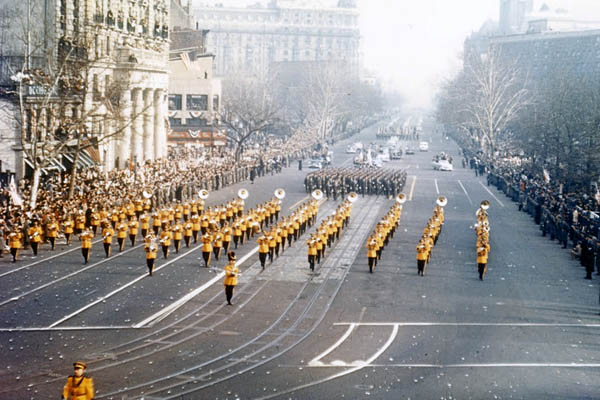 The parade was led by police motorcycles and parade marshals, and then The U.S. Army Band (right). Marching behind the band and just ahead of the presidential party was the Army's ceremonial unit, the 1st Battalion of the 3rd Infantry from Fort Myer VA. (3)

Marching pace was specified as 120 30-inch steps per minute, which would be 3.4 MPH for the vehicles. 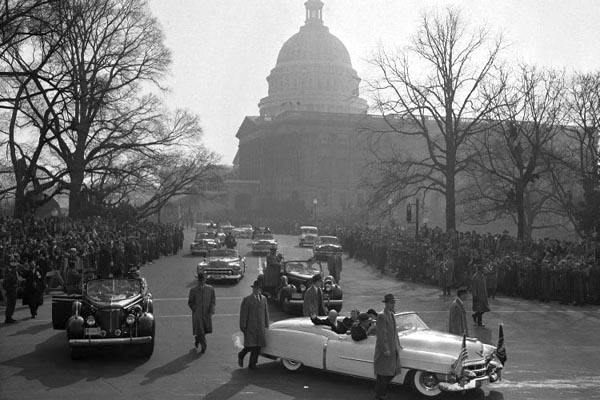 President-elect Eisenhower and his wife Mamie rode in a white 1953 Cadillac Eldorado, its tail hugged by the Secret Service in two 1938 Cadillac Fleetwood limousines originally delivered to Franklin Roosevelt. (4) Behind them was the new VP, Richard Nixon, in a light green Eldorado. 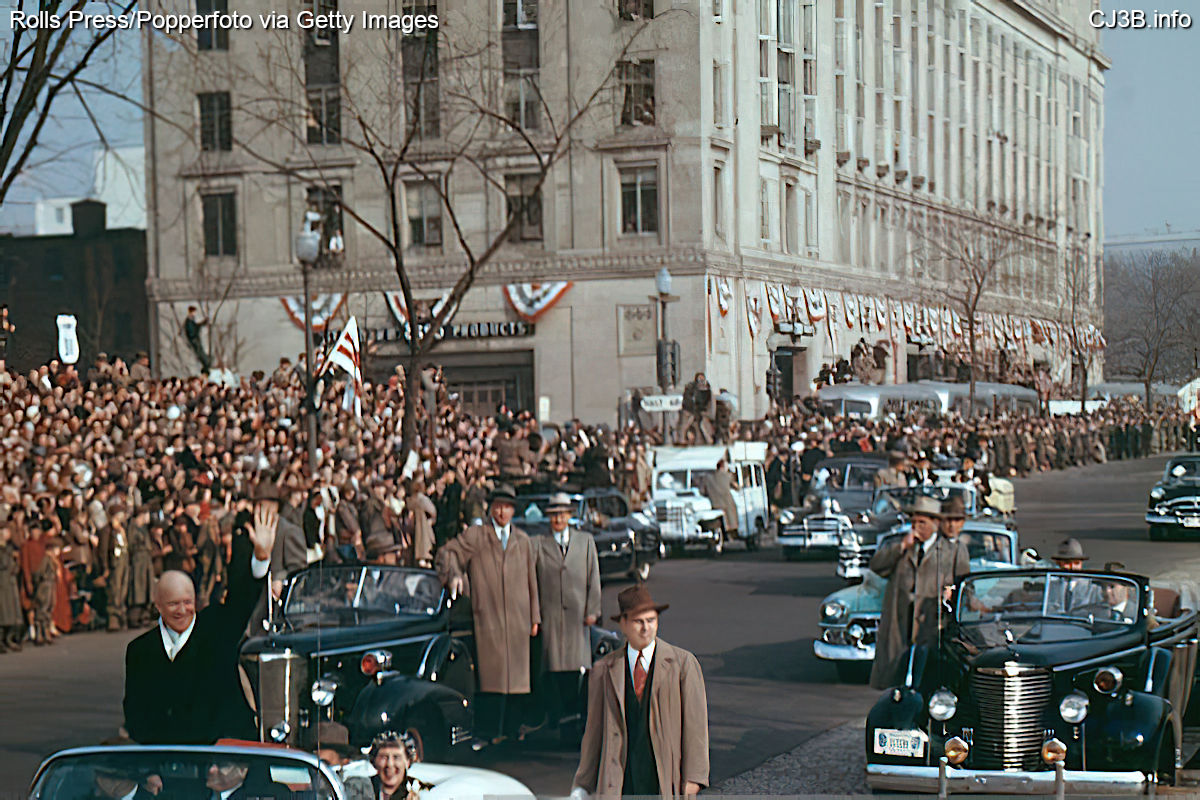 It's interesting to note that in both of the photos above, you can just glimpse two white Jeep station wagons among the media cars behind the presidential party, one of them seen here carrying television cameras on its roof. (5)

Also interesting are the schematic diagrams of the parade on page 35 (200K JPEG) of the Grand Marshal's General Orders No. 1, (2) which reveal that the original plan was to have Eisenhower and Nixon together in the first Cadillac, followed by their wives in a second car. This was revised, presumably at Ike's request. Rumours were already circulating about Ike's relationship with Kay Summersby, his driver and secretary during World War II, so that may have been a factor in the decision. 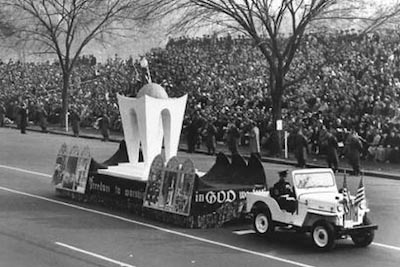 The first float in the procession was labelled "In God We Trust", and along with a special church service held prior to the parade, and a prayer spoken by Eisenhower during his inauguration ceremony, it was intended to illustrate the importance he placed on religion in affairs of state. (7) On the sides were the words "Freedom of Worship", with illustrations of different religions. The central structure was designed so it could be interpreted as a church or a mosque. (8)

See also a color image (40K JPEG) of the float and the CJ-3B pulling it, taken from a home movie shot by the late Roderick Cox of Bethesda MD. (9) 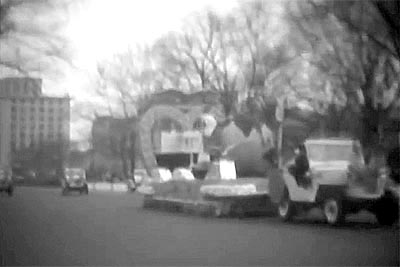 Following the massed colors of the regiments fighting in Korea, and six battalions of West Point cadets, another Jeep pulled the float representing the District of Columbia. This frame from newsreel footage (10) reveals that right behind it were three additional Jeeps driving abreast, probably spares in case of any breakdowns. According to page 6 of the General Orders, (11) there were also Army wreckers stationed at five points along the route. 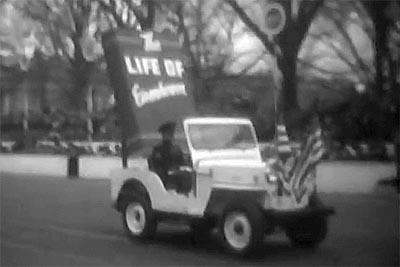 One of the focal points of the parade was a series of ten floats in a row depicting "The Life of Eisenhower", including his boyhood in Kansas, his wedding, the "Crusade in Europe", and his command of NATO. These floats, and a series of Army units including the 280mm gun (see below), are diagrammed on page 44 (110K JPEG) of the General Orders. (6) 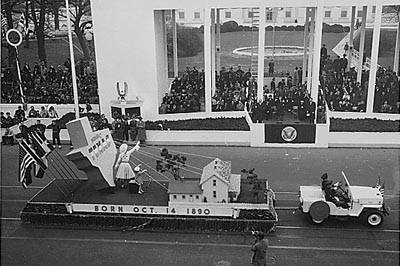 The first scene in Ike's life was depicted on a float from the state of Texas showing his birthplace in Denison TX, and seen here in front of the White House reviewing stand.

Each Jeep was driven by two U.S. Marines, and carried two American flags and two circular panels identifying the float. As seen in the photo below, each Jeep also carried the special 1953 inaugural license plates (150K JPEG). (12)

As far as I can see in the photos, the floats were pulled with a standard trailer tongue and hitch.

Tom Edwards found this photo in the February 2001 issue of Reminisce magazine. (13) Here's the first-person recollection included in the article:

"In 1953, I was a Marine Corps sergeant stationed at Henderson Hall and assigned to Pentagon security duty," relates William Ditto, of Berkeley Springs, West Virginia. "In January, Dwight Eisenhower was to be sworn in as President. I was chosen to be the driver of the float from West Virginia that was in the inauguration parade. It was cold, and after our brand-new Jeep was hooked to the float, we parked on a side street for 7 hours before moving out in the parade. But it was quite a thrill, and after the parade, the Willys company treated all the drivers to our very own inauguration party."

Well, I guess that the drivers probably popped the hoods for a look at the Hurricane engines during all those hours of waiting, and at least one of them -- pulling the NATO float labelled "Peace, Strength, Freedom" -- didn't get both of the latches re-fastened! 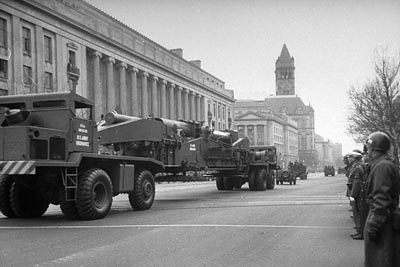 The Cold War was underway, and the former 5-star general's administration was obviously going to balance its emphasis on peace and religion, with a committment to military strength.

In what is possibly the closest the West has ever come to a Communist-style military hardware parade, four companies of tanks and artillery were followed by the huge new M65 cannon which fired 280mm tactical atomic shells, equivalent to the Hiroshima bomb. (14)

Seen trailing the 280mm gun in another photo (60K JPEG) are the governor-elect and float from the state of Florida. 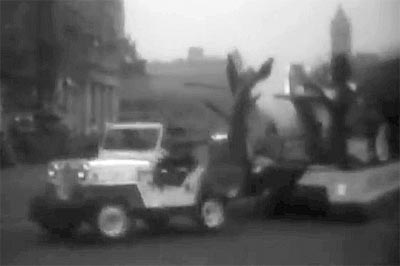 There was a float sponsored by each of the 48 states, plus other organizations including the Boy Scouts and Civil Defense.

What happened here? Another shot from the newsreel footage (9) reveals that the Jeep pulling the South Carolina float had no flags on the front. 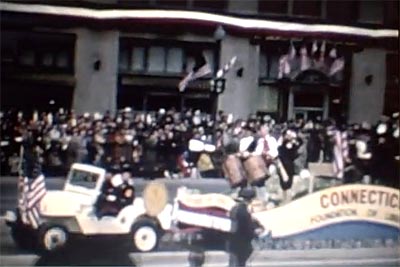 Roderick Cox captured the Connecticut float with its Jeep and Marine sergeant at the wheel, in his home movie. (9)

There must be more surviving color photos of the parade -- I would like to find out where they are. Also what happened to the white Jeeps? Apparently there was an auction. 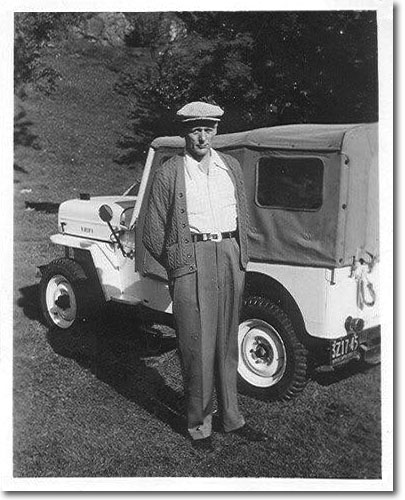 We have found what appears to be one of the inauguration Jeeps, in a very unlikely place. Robert Vaageskar in Norway contacted CJ3B.info to tell us about his white 1953 CJ-3B, serial number 453GB2 12172.

Robert says, "This is my dad's uncle who bought the Jeep at the auction after the inaugural parade and took it to Norway. (He had emigrated to the US.) His brother used it as his daily driver and farm tractor from 1954 until the late 80s." 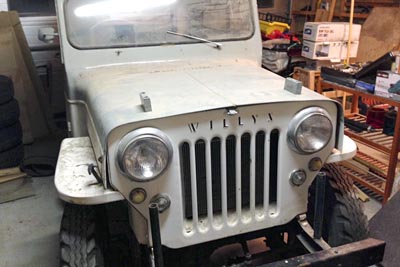 The Willys has the distinctive flag holders welded on the front frame horns. 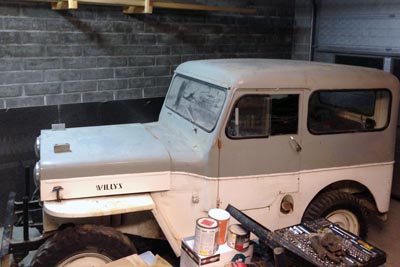 It currently has a two-tone paint job and steel hardtop, installed in Norway in 1957, but Robert is hoping to restore this significant piece of Jeep heritage and American heritage to its original condition. 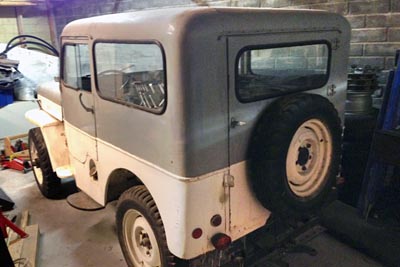 The drawbar is still in place, but the ball is missing. Additional front and rear marker lights were probably installed to meet Norwegian regulations. 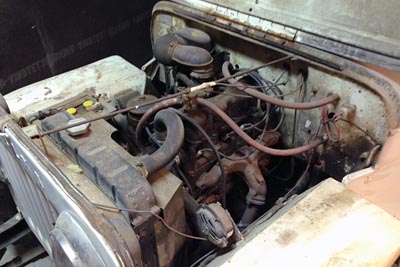 The engine compartment is still in its original and unique white paint.

Thanks to Robert Vaageskar. He and I would both like to hear from anyone with further information or photos of the white inauguration CJ-3Bs. -- Derek Redmond

By the way, a white Matchbox Jeep with flags was one of my suggestions for The CJ3B Page Collection.

See more CJ-3Bs in Everybody Loves a Parade on CJ3B.info.