A Jeep Called "I Presume"

This is a story about David Nixon, who died in February 2017 in Victoria BC, at the age of 82. David worked in the 1950s for the Canadian diplomatic service, and in 1960 was posted to the Congo. 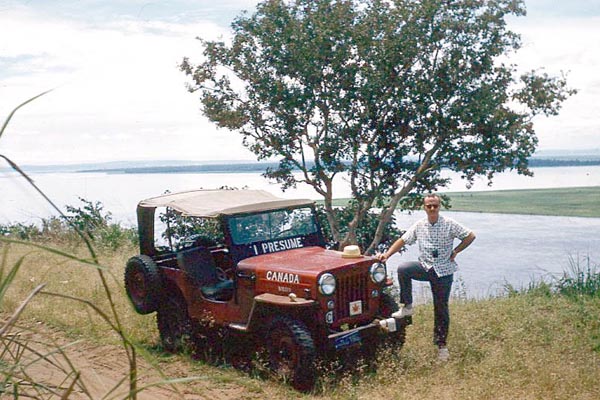 He purchased a Jeep in the Congo, which was already named "I Presume" -- a reference to the line reportedly spoken by journalist Henry Stanley when he found the explorer Dr. David Livingstone in the East African jungle in 1871.

This photo (showing the two spare tires on "I Presume") was taken in early 1961 during a drive up the north bank of the Congo River from Leopoldville (now Kinshasa). 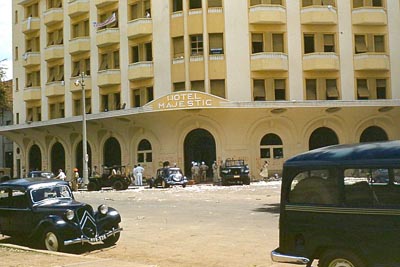 The Congo was not David's first exposure to Jeeps. His first posting, as a 19-year-old in 1954, was to Indochina, where the French were withdrawing from their colonies of Vietnam, Laos and Cambodia, after having lost the First Indochina War.

While passing through Saigon on 20 July 1955, he witnessed an attack by anti-Communist rioters on the Hotel Majestic, the Vietnamese headquarters of the International Control Commission (ICC), which was supervising the implementation of the Geneva accord that ended the war and divided Vietnam. David's photo of the aftermath at the hotel shows that by 1955, Jeeps were already starting to become as common on the streets of Saigon as the ubiquitous Citroën Traction Avant. 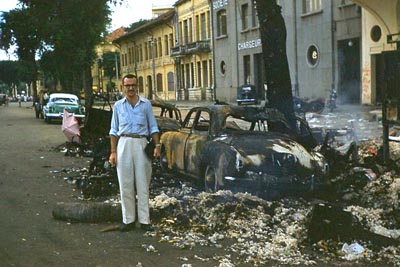 This photo from David's camera shows him in front of vehicles destroyed during the attack.

Canadian troops were part of the ICC, and Canada's Department of External Affairs had sent David to Cambodia for a year as support staff for the ICC there. Following that posting, David spent several years as a cryptographer for the Canadian diplomatic service in Germany.

In 1960 a UN mission was established to try to keep the peace in the newly independent Congo. Canada was also part of that mission, and David was sent to Leopoldville as support staff for the military. This was his first postcard to his family: 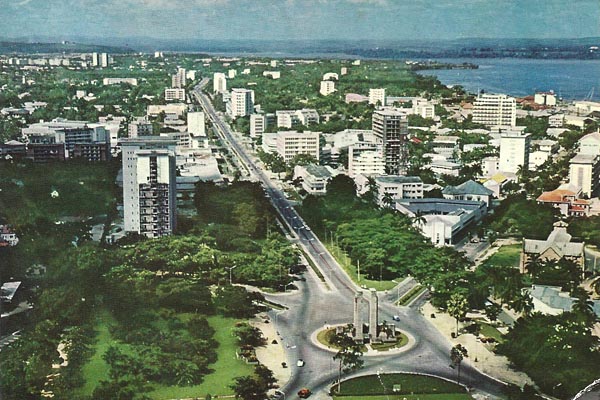 "Sorry to disappoint you, but THIS is Africa!! Will write when I get a chance -- have been very busy past week. Moving in with Bulls (Trade Commissioner) today 'cause hotel not too good and food worse. I'm feeling fine and climate very nice so far -- much cooler than Ottawa in fact. Leopoldville is a most attractive city although slightly deserted at the moment.

"Best regards to all, David" 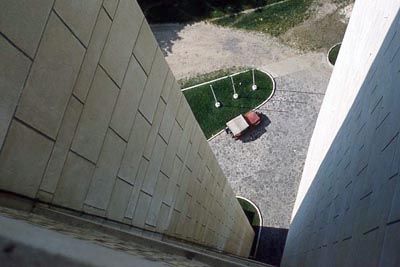 His first glimpse of the CJ-3B was from several stories above, and he thought it made an interesting photo. On 15 September 1960 he wrote home:

"The Bulls will be returning to Canada around December and I'm thinking seriously of buying their 1952 Jeep from them as private transportation is a must here. The buses are not used by white people and the city is so spread out that it is impossible to get anywhere at all by foot. Roger said he will be willing to part with "I Presume" (the Jeep's official title) for little money as it only cost him $400.00 two years ago and it's been all over Africa since then." 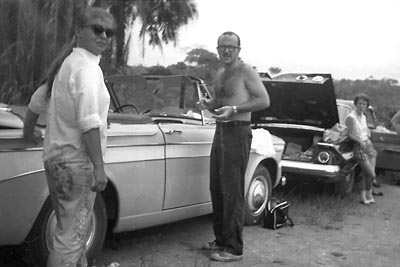 David no doubt liked the way the Jeep stood out from the rest of the mix of European and American cars driven by the diplomatic corps. He is seen in this black & white photo taken by a friend, at a picnic with other Canadians in Leopoldville. 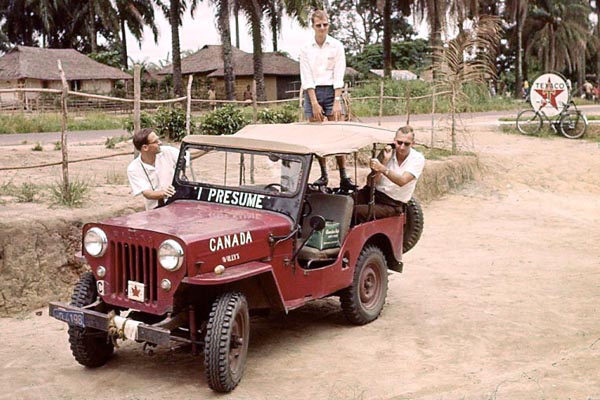 A month later he had bought the Jeep and taken this photo of some friends admiring it. He sent home more details:

"It is named "I PRESUME", the words being stenciled on the front of the Jeep just under the windshield. There is quite a history behind "I PRESUME" -- it was first brought to Leopoldville in 1951, being driven here all the way from Israel. Since that time it has been passed back and forth between members of the American Consulate and the Canadian Trade Commissioner's office.

"Before I took it over, it was borrowed by the UN for the use of the Canadian postmaster, Capt. Manck. While it was in the possession of the Canadian contingent of the UN, a lot of work was done on it so that now it is as good as new and should last me for my posting here."

Based on what David wrote about it, this Jeep may have been manufactured in Israel. Clearly it did not arrive in the Congo in 1951 as he was told, since the CJ-3B was not yet in production in 1951. But the Kaiser plant in Israel built some 2,100 CJ-3Bs starting in 1953, shortly after they went into production in the United States, and many of the Israel Jeeps were exported to countries where Willys-Overland Export Corp. did not have distribution agreements. So it seems likely that "I Presume" was an Israel Jeep. The extra set of marker lights on the front fenders were probably added in the Congo; they appear in many photos of Jeeps taken there. 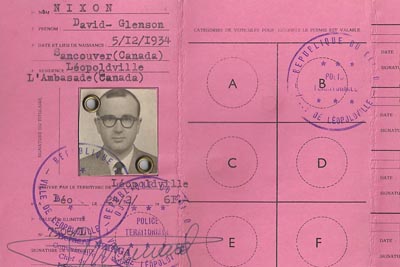 Davd had to get a Congolese driver's license, but he assured his family:

"As far as the local situation is concerned here, I am sure that the reports you read in the newspapers are far more sensational than the real thing. Oh, occasionally we do hear gunfire coming from the African section of town and, of course, the streets are always patrolled by armed soldiers and surly members of the Force Publique who often stop you to ask for identification papers, but quite frankly this city is quite like any other city in so far as daily activities are concerned." 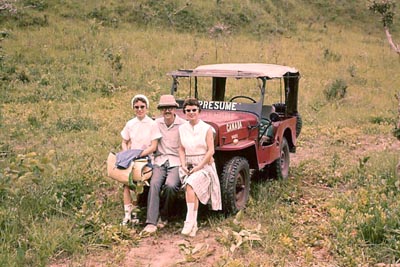 In a letter written on 17 October 1960, he described driving the Jeep:

"It's a very African-looking vehicle -- dark red with brown canvas top, appropriately dusty and fully equipped for safari with gas and water cans and two spare tires on the back. Mind you, it sounds somewhat like a bomb, especially when driving downhill, but the reaction I get from the native population is superb. Children dance up and down and laugh; men and women stop whatever they're doing and wave and smile when I pass by." 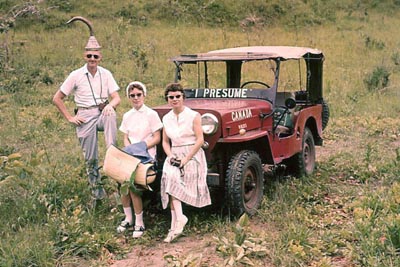 "The Congolese are individually very, very friendly and childlike. But they are slightly timid of white people, particularly when a white person goes swishing by in a huge American automobile. I quite often give rides to people I pass by on the road and they seem to love it and are most grateful. It's good public relations, too, because "I PRESUME" also has "CANADA" painted on both sides of the hood, as well as a maple leaf emblem fore and aft."

David took this photo, with a friend wearing the oil funnel whch was always kept handy.
David remained in the Congo until March of 1961, when he applied for leave to visit South Africa for a holiday. His leave was refused and he was recalled suddenly to Ottawa. He was then forced to resign from the foreign service as a result of the RCMP and the Department of External Affairs discovering that he was gay.

Sufffering from depression, he sought medical help the following year, and eventually found himself in the Montreal clinic of Dr. Ewen Cameron, whose brainwashing experiments involving electroshock and drugs including LSD were partly supported by the CIA (Wikipedia). Months of electroconvulsive treatments and heavy doses of drugs did in fact erase much of David's memory, but he was later able to recover some of it from his many photos and letters, such as those above describing "I Presume".

At the age of thirty, he had to begin a new life, which included more world travel, interesting work for Expo 67, and a career with Birks jewellers. Much of it was lost to David again in his later years due to dementia.

Thanks to the late David Nixon for recording his adventures, and to Ken Sudhues for preserving that material and providing assistance for this article.

See more Civilian Jeeps in the Congo on CJ3B.info.