It's always interesting to find pictures that put the ubiquitous Willys Universal Jeep into the context of everyday civilian life in the decades following World War II, especially when there is a connection with a famous event or person. Or, in this case, with an unusual family business which became a national phenomenon in the 1950s.

With the possible exception of Sea Lion Park at Coney Island (established in 1895), Africa U.S.A. in Boca Raton, Florida was probably the first animal theme park in the world(1), but it's now largely forgotten because it was in business for less than a decade. It was built and operated from 1953 to 1961 by housing developer John Pedersen with his wife Lillian and children Jack and Shirley. Pedersen had always dreamed of building an African animal park, and in 1950 purchased 300 acres of grassland that looked like an African savannah. Miles of canals and lakes were dug. An artificial waterfall and geyser were engineered utilizing pumps moving 250,000 gallons per hour, and over 55,000 plants were added to the landscape. All that was missing was the animals.

Jack Pedersen spent seven months in Africa collecting zebras, ostrich, cranes, wildebeest, zebra, and gazelle. The animals were loaded onto the steamship African Planet, which left the port of Mombassa and sailed for nine weeks across the Atlantic to Port Everglades, Florida. It was the largest shipment of animals ever to leave Africa aboard one ship.(2) 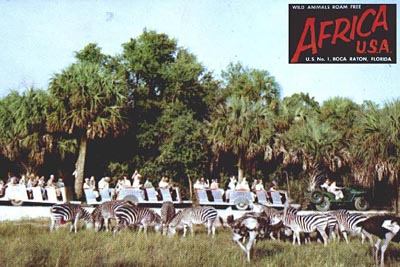 On 10 March 1953 Africa U.S.A. opened its doors to the public. Admission to the garden areas was free, and the Jungle Train Tour was 95 cents. A green CJ-3B Jeep can be seen pulling three passenger trailers in this publicity photo. 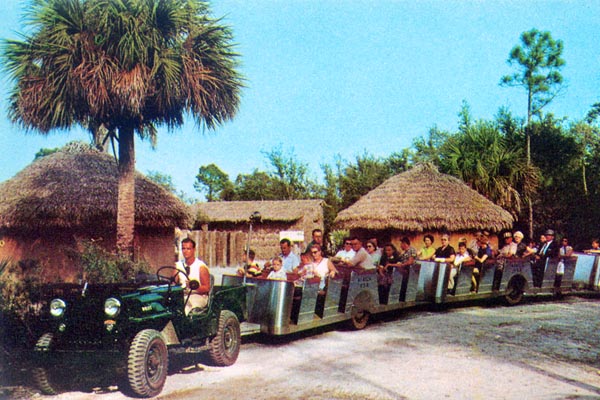 A postcard gives a great look at the 3B pulling a Jungle Train. The fact that the trains were fully open while the animals roamed free, attracted lots of media and public attention in the somewhat uptight 1950s. 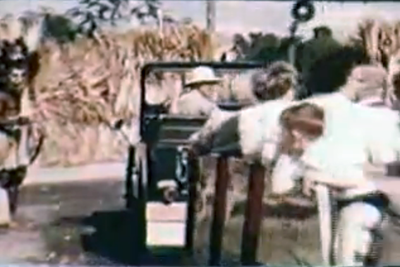 This still is taken from the short video "Africa U.S.A. Boca Raton Tram Ride" available on YouTube. The video shows mainly animals, not Jeeps, and the soundtrack is the park's theme song "Skokiaan" which was also a successful record by The Four Lads in 1954.

The ALA taillight seen here suggests a pre-1955 CJ-3B, and it seems likely that it would be a 1953 model, purchased the year the park opened. 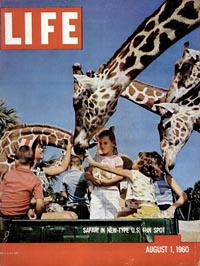 Later additions to the Africa U.S.A. animal population included giraffes, leopards, cheetas, and the largest herd of camels in the United States.

Even though the Animal Kingdom at Walt Disney World was hailed as a new concept when it opened in 1998 near Orlando, the idea had existed decades earlier in Boca Raton. (And in fact Busch Gardens, another African-themed park, opened near Tampa in 1959 and is still in business.) Walt Disney was apparently a frequent visitor to Africa U.S.A. and actually considered purchasing it. No doubt he was also aware that Africa U.S.A. was chosen over Disneyland to grace the cover of the 1 August 1960 issue of LIFE Magazine.(3) 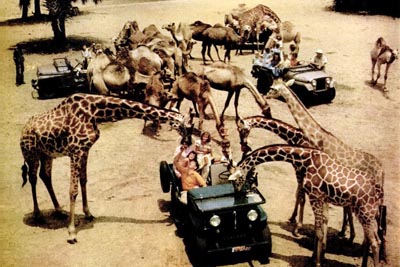 A crowd of giraffes and camels is seen with customers riding in a CJ-3B and a couple of CJ-5s, in a photo from the LIFE article about theme parks. The caption mentioned that Africa USA's herd of giraffes had grown from 1 to 13 in six years. 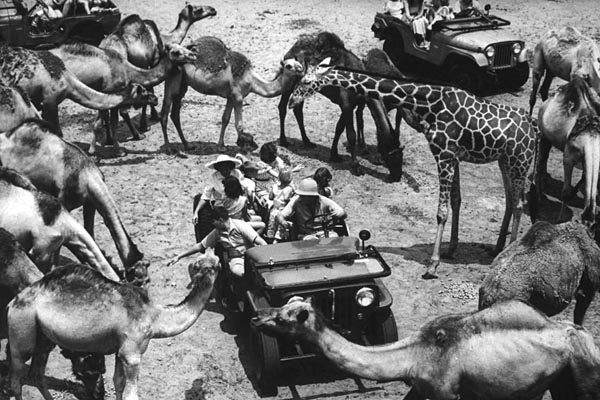 Some outtakes from the high angle shots, taken on 1 June 1960 by Lynn Pelham, were found by Federico Cavedo in the LIFE photo archive at Life.com. These copies scanned from the original negatives are sharper, but apparently come from a black and white roll. 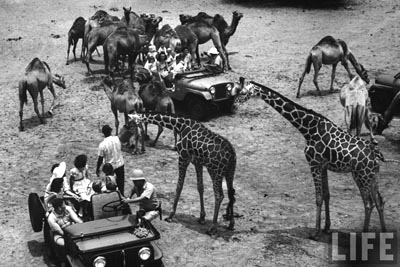 Regulations from the Department of Agriculture made it difficult to import giraffes directly into the United States in the 1950s. Africa U.S.A.'s first giraffe had been purchased from Kenya, but the Department of Agriculture initially refused to release him to a private zoo, and he was quarantined for 18 months in New Jersey. Jack Pedersen went to court, and the U.S. Court of Appeals ruled that Africa U.S.A. had as much right to have a giraffe as any public zoo. The court battle cost over $17,000 in legal fees so the giraffe was named "Moneybags".(4) 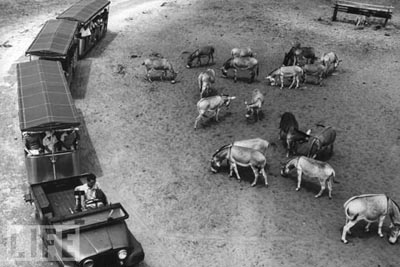 This LIFE photo shows the safari tram cars as of 1960, with roofs added, presumably for protection from the sun rather than the animals.

The LIFE photo archive of more than 10 million pictures is free for personal and research purposes, but copyright and ownership of all images remains with Time Inc. They appear among the results of any Google image search, or are available separately at Life.com. 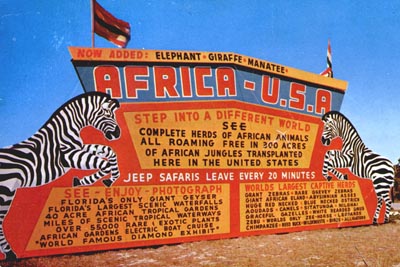 The park became an increasingly popular tourist attraction with some 300,000 visitors a year, but housing developments began to spring up around the property in Boca Raton. Many residents complained about the noise and traffic it generated, and there were several developers anxious to buy the land. The Pedersens retired, and Africa U.S.A. was sold and closed its doors on 4 September 1961. The animals were sold at auction to zoos around the country, and the property is now the Camino Gardens subdivision. 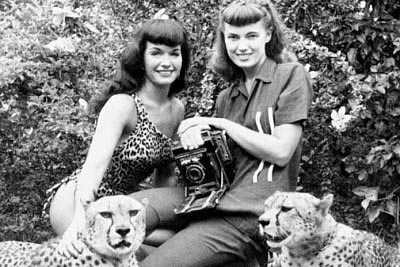 Famous pin-up model Bettie Page posed for one of her best-known series of photos at Africa U.S.A. in 1954. She's seen here with the famous cheetas Mojah and Mbili, and photographer Bunny Yeager, who later took the photos that got Bettie into the sensational new magazine Playboy in January 1955.(5) 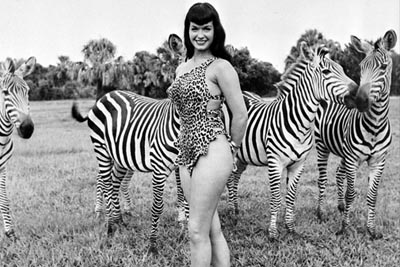 These pictures in the leopard skin helped make Bettie an iconic profile of the 1950s, just like the high-hood CJ-3B. Too bad she didn't pose with a Jeep (270K JPEG).

Captions appearing elsewhere with these photos sometimes incorrectly state that they were actually taken in Africa, or that the cheetahs were stuffed. 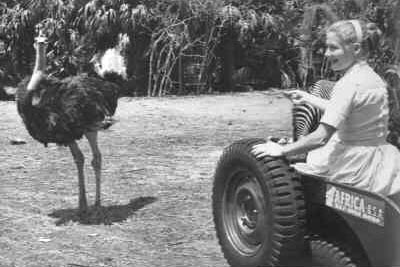 We haven't seen any actual photos of Bettie posing with a Jeep, but another more modest young celebrity who visited Africa U.S.A. did take a Jeep ride. "Miss Phyllis" was the host of the Florida version of the children's television show Romper Room, produced by WPTV Channel 5 in West Palm Beach. Photo courtesy of the Africa U.S.A. website.

Thanks to Federico Cavedo for digging up the LIFE photos from Life.com, which are copyright by Time, Inc. Thanks also to Ginger Pedersen's Africa U.S.A. website, which has lots more photos and memories of the park, its history and animals. -- Derek Redmond