A few moments in August 1979 were all it took for American Motors Corporation to demolish the office building which was the flagship of the Willys-Overland plant in Toledo for six decades, and where many Jeep decisions were made over those years.

A picture of the rubble (70K JPEG) after the dust had settled, shows how neatly the demolition engineers did their job. The picture was taken from the nearby highway by David Noel, and comes from the Images in Time collection at the Toledo Lucas County Public Library. 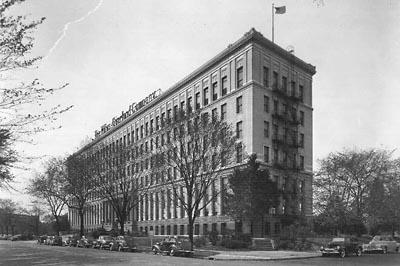 The administration building was an impressive structure which had been built by John North Willys in 1915, eight years after he bought Overland. The company managed to get some Willys automobiles into the foreground of this late 1940's photo of their headquarters.

The Toledo Library collection includes a similar view from the west (70K JPEG) and a 1925 photo by Edward F. Wilusz showing the rear of the building (100K JPEG). 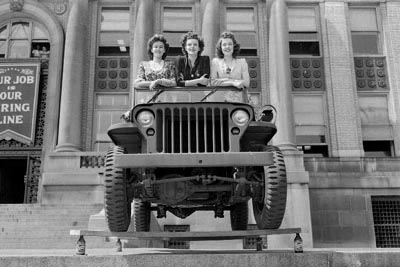 There are some famous photographs of World War II jeeps taken in front of the administration building in its prime, such as these two which demonstrated how light and how sexy the Willys jeep was. The banner above the main entrance says, "Our Job is Our Firing Line." The young women were Willys-Overland secretaries recruited from the offices just inside, and in the background you can see some fellow employees looking out the window. 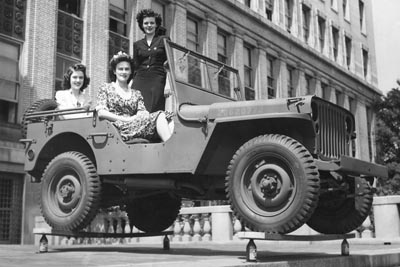 Jim Burand sent these two beautiful prints which had belonged to his mother, who passed away in 2011. Her name at the time was Margaret McTigue, and she was the secretary sitting in the back seat in this shot.

The bottles under the planks appear to be Old Vienna Beer, brewed by Koch Beverage & Ice of Wapakoneta, Ohio; you can almost read the labels in the large prints (250K JPEGs). 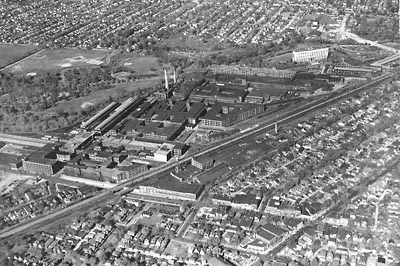 An aerial photo circa 1950 shows the administration building's place as the crown jewel at the north end of the Willys factory, which stretches from left to right across this photo, likely taken by Willys photographer Milton Zink. (See also The Parkway Plant From the Air on CJ3B.info.) 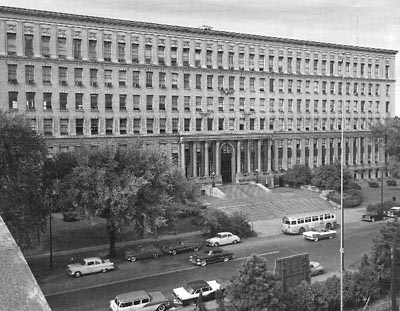 The CJ-3B era: this photo in the Toledo Library collection is described as circa 1957, and shows busy traffic on the Jeep Parkway which separates the office building from the rest of the plant. No CJ-3Bs or other Willys vehicles in sight, however. New corporate owners the Kaisers have removed the "Willys-Overland Company" sign from the roof and apparently replaced it with small logos mounted on the wall above the front portico.

See Pepsi Surrey Galas, 1960 for a photo of 18 Surreys on the front steps. 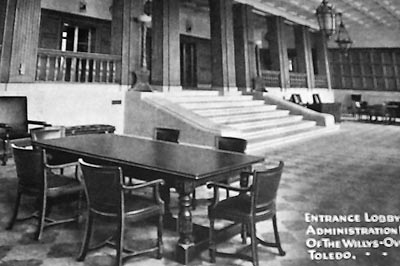 The interior was just as grandiose as the outside of the front entrance. Bill Norris found these postcards (right) in the collection of the Detroit Public Library. The photos used were probably taken by Korb Photographic Studio for Willys-Overland immediately after completion of the building; the Toledo Library collection includes a similar photo credited to Korb circa 1915, showing the boardroom (80K JPEG.)

Some artifacts from the building, including decorative bannisters, were moved across the street to the Jeep House Museum before the demolition in 1979. (See On the Trail of Jeep History on CJ3B.info.) 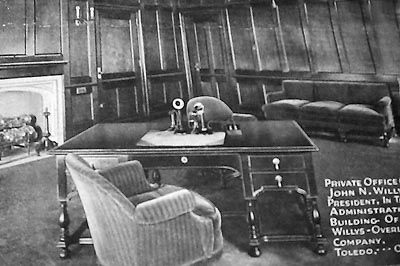 John North Willys had the latest in technology in his office; not just one but two shiny new telephones on his desk. Mr. Willys was an Overland automobile dealer who purchased the ailing company in 1907, turned it into the second-largest car maker in the country, and built the Toledo factory. One of the cars that put the roar in the Roaring 20's was his 1926 Overland Whippet with its new 4-cylinder engine, which later became the basis of the "Go-Devil" and "Hurricane" Jeep engines.

A Toledo News clipping from 31 August, 1915 (left) in the Jeep House Museum collection, calls the planned building a skyscraper, and reports: "Here's how the new seven-story office building for the Willys-Overland Auto company, contract for which was awarded on Saturday to H.J. Spieker & Co., will look when it is completed. It will cost more than $200,000. It's only part of a new building program announced by the company. The entire plan will mean an expenditure of approximately $2,000,000.

"Plans for the structure were drawn by Mills, Rhines, Bellman & Nordhoff. The building will occupy the site of the frame office structure that has been used by Overland since J.N. Willys bought the plant several years ago." 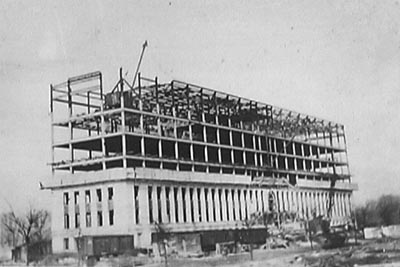 The building was built on a grand scale to house the hundreds of office employees. It was 373 by 63 feet, and 120 feet high for seven stories. It was all to be "fireproof" construction -- steel, brick, stone and terra cotta -- and had five elevators.

A blueprint of the building (220K JPEG) also found by Bill Norris in the Detroit Public Library, shows the layout of the seven floors. 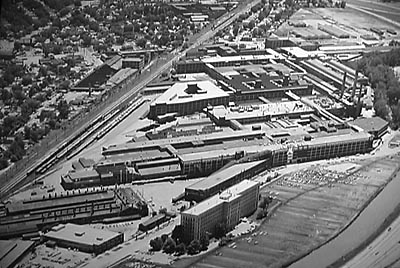 In an aerial photo taken in the 1970's, shortly before the building's demolition, the rear windows look out over the mostly empty employee parking lot, the Ottawa River, and the new highway I-75 (right).

Last updated 24 May 2015 by Derek Redmond redmond@cj3b.info
https://cj3b.info/Factory/FactoryAdminBldg.html
All content not credited and previously copyright, is copyright Derek Redmond