Eventually anyone looking at an early civilian Jeep will notice holes in the sides just about next to where the driver's and passenger's outside foot would rest on the floor. They are roughly three-quarters of an inch in height and three inches long. 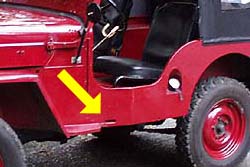 Since many CJs came from the factory with no top, and many never had tops, holes were necessary to drain out rainwater. These holes through the sides are not found on military versions of the Jeep, nor are they found after the production of the CJ-3B ceased in the mid-1960s. Interestingly, military Jeeps always had drain holes in their floors, which became standard on later CJ's. (The side holes are also missing from many reproduction flat-fender body tubs.)

That all makes perfect sense, but what about a CJ which has a good canvas top or better still a metal top? Now one has a waterproof Jeep with a drain, or a winterized jeep with air conditioning. So in fact if that hole is a drain for letting water out, then shouldn't it have a stopper to stop water and weather from coming in? The uninsulated body of the CJ with metal or canvas top demands a strong heater and those little holes make an already porous Jeep even more airy in the winter. Shouldn't there be something to close those holes? People have poured over CJ parts lists and found no reference to plugs or stoppers of any kind.

The question of the purpose of the holes was presented to the CJ-3B Bulletin Board. While there was general agreement that they were drain holes, and most agreed that they ought to have plugs, there was no suggestion that anyone had ever seen or heard of a drain hole plug. It appeared that we were at a dead end and a letter was sent to the Classic Jeep Mailing List just to make sure there weren't stones unturned. The results were rewarding. Their function as drain holes was confirmed again, though Todd Paisley said he had never found mention of plugs in Willys Overland's records. 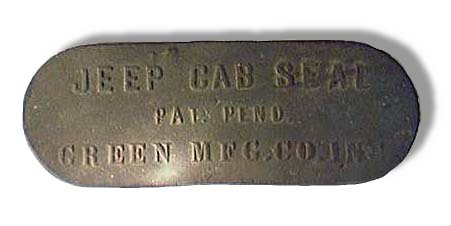 Then, Tony Norton remembered visiting a Jeep dealer around 1956 and being told by the salesman that the holes are "to let water out." Tony replied "Well, looks like to me that they just as well let water in." The salesman said "Well, it just runs right back out." After a short discussion on which way water runs and why holey boats don't float, he said "But, if you really want to plug them up, when you buy the Jeep, you can get some plugs as an option." There it is, a remembered reference to the plug's existence.

Fred Coldwell mentioned, "I have seen (and have somewhere in my basement, yet to be excavated) oblong rubber plugs that fit in those holes to plug them shut. They don't seem to be a factory part, so might be an aftermarket part. They do exist. I found mine on an old flatfender CJ-2A many years ago."

It was exciting to be so close to the plugs yet still not able to see them. Then Gary Keating wrote to say. "I also have 3 of these plugs that close off the drain holes. They say 'JEEP CAB SEAL, PAT PEND. GREEN MFG. CO. INC.' on the face of the plug. The inner part has a rib all around it that holds the plug in place. It is made of black rubber." 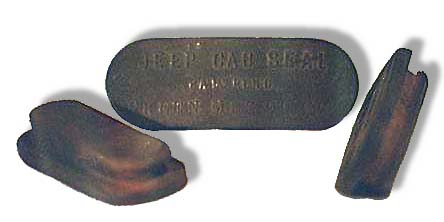 It can be argued that rubber plugs aren't worth getting too excited about. But for me the thrill was in the hunt and the evidence coming from CJ enthusiasts and historians which opened up like pages in a book: from supposition to belief, to memory, to possession, and finally to photographic evidence. If nothing else, the search for, and the finding of, the real things has plugged a very small hole in Jeep history.

Reproductions of the rubber drain plugs are now available from Herm The Overdrive Guy.

Some people may have decided that the drain holes were never going to be needed and that they should be sealed shut permanently. 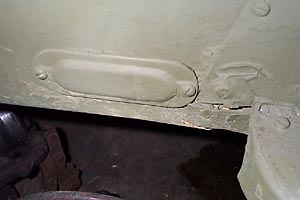 In November 2001 Bill Oakes sent a photo of the side of his 1945 CJ-2A, serial #11590. Screwed over the drain hole, is a metal cover plate that appears to be manufactured to fit that specific hole. Bill also has knowledge of another early CJ that has the identical drain hole covers. These covers have no manufacturer's identifying mark and are apparently not found in the CJ-2A parts list.

Don Arnold commented on the CJ-3B Bulletin Board on the likely origin of this plate: "The photo of the stamped metal cover hiding the drain hole, is of a cover used to close up a 'pulling L'. Any commercial electrical supply place sells them; they are commonly used on jobs requiring steel conduit. I think a rubber gasket comes with it. Might have to buy the whole cast fitting to get it."

Thanks to all those who contributed to the "funny little holes" thread on the CJ-3B Bulletin Board and the Classic Jeep Mailing List. -- Bart McNeil

Thanks to Bart for writing the story of this Jeep oddity, Uwe Strecker for the Jeep photo, and Gary Keating for taking the photos of the plugs. -- Derek Redmond