One sometimes sees "4 WHEEL DRIVE" stenciled on the tailgates of civilian Jeeps. Catalogues sell two versions of the stencil and they do not agree on which stencil is to be used on what year and model Jeep. This article will attempt to create guidelines for correct stencil use based on period photographs and remaining examples of unrestored Jeeps.

This is not an easy task because about 95% of period and modern published photos are front, 3/4 front, and side views. There are very few clear rear views of unrestored Jeeps. Another problem is that serious interest in Jeep history is fairly recent, and often Jeeps in published photos are not identified, misidentified or shown with non-original components, and altered vehicles are offered as original. An author, in his enthusiasm, may not know he has made a mistake and therefore unknowingly perpetuates incorrect information about the vehicle shown. Other publications may have good descriptive photographs but fail to identify them as to date.

Note: click most of the detail photos here to see full versions of the photos (50K JPEGs).

This drawing number 668718, originally done on 16 April 1947, shows the precise location of the stencil on the tailgates of CJ-2A and 4T pickup truck models. The drawing is related to Engineering Release 3069 which was headed "Name - Tail Gate - Addition of Identification Stencil," and notes that the stencil was Released for Production on 5 June 1947.

See the full drawing (70K GIF) including the 4T truck tailgate and half-scale detail of the stencil. 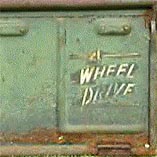 This is an owner-identified 1947 CJ-2A tailgate with the original "4 WHEEL DRIVE" stencil. Given the above information we know it is from the second half of 1947. 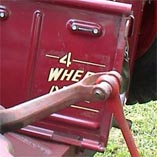 This photo shows the tailgate of Joe Caprio's 1951 CJ-3A, including most of the early stencil. 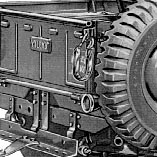 An illustration from the 1956 CJ-3B Parts List includes (barely visible behind the tailgate chain) the stencil on the tailgate of an early CJ-3B. 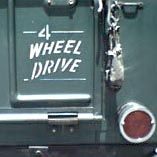 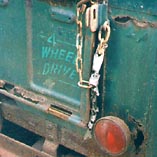 The most recent example of the first stencil's use I've found is on this virtually untouched 1956 CJ-5, which spent 30 years in an upstate New York barn. Mark Sinclair, its current owner, dragged it into the light of day. Things have rusted off, but they were never replaced, so anything on the Jeep is from its year of purchase. You may notice that this is the first civilian Jeep tailgate stencil we've found to be painted in anything other than white or black. Here the light green stenciled paint creates an interesting contrast with the darker green. It is quite a bit more subtle than anything we've found on earlier CJ's, and perhaps illustrates Kaiser-Willys' efforts to "pretty up" the CJ-5 while leaving the 3B to be the reliable old workhorse.

Exactly when the first stencil was discontinued in favor of the second version is currently a matter of conjecture, because good period photos or drawings have not surfaced. Observation of existing examples suggests approximately 1955. 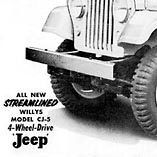 Shortly after the introduction of the CJ-5, Kaiser-Willys may have decided to modernize the stencil by increasing the size of the "4", moving it to the left side and eliminating the horizontal lines top and bottom. This may be consistent with the CJ-5s claim to being "STREAMLINED". Their ads tout it as a much improved and attractive vehicle, so the redesign of the stencil at about this time would make a certain amount of sense.

The Beachwood Catalogue offers the change to the second stencil as the beginning of the CJ-3B in 1952. We know that is inaccurate from the above photos.

I would guess that the change occurred in the 1956 model year, but have no proof as to the exact date. Making matters more difficult is the fact that not all CJ's had a stencil; perhaps most did not. 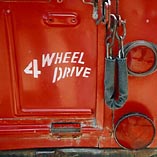 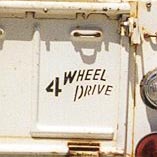 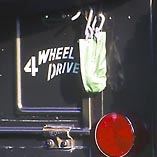 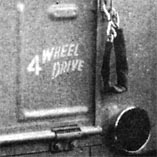 The latest CJ-3B I know of with a stencil is from 1963, left. The most recent example of the second stencil I have found on any Jeep is this service manual photo of a CJ-5A Tuxedo Park, right, which would date from 1964 or later. 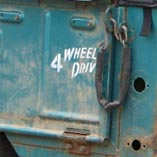 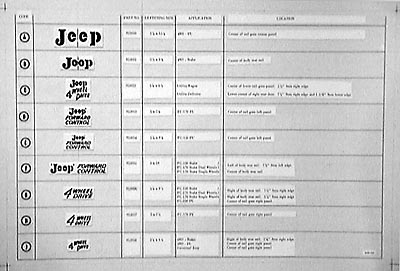 This factory chart dated 1960 shows stencil designs and reveals part numbers, dimensions and locations, for all vehicles. This primary evidence should settle any argument on the proper stencil and its location on the tailgate. For the Universal Jeep, "center of tail gate right panel" means equal margins on sides and equal margins top and bottom.

This paste-up of drawings and text was used for printing a factory stencil instruction sheet which went out to dealers with Kaiser Parts and Accessories Bulletin No. D-18 (20K GIF) in May 1960. The part numbers shown are not included in the published 1956 or 1962 Parts Lists. Thanks to Keith Buckley for scanning Bulletin D-18, which shows the list price of the complete "Kit, Insignia Stencils" as $2.95. The chart is courtesy of Jim Marski. 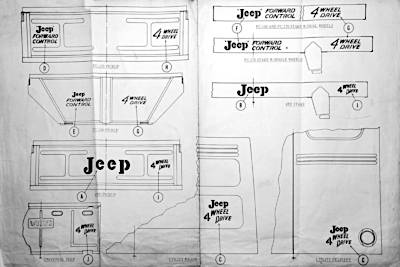 A second chart is a set of drawings showing the stencil locations. The two charts clarify that stencil "C" (with Jeep over 4 WHEEL DRIVE) was used on the Utility Wagon and Utility Delivery wagon, not on the Universal Jeep. Another interesting point is that Jeep is in quotation marks on the Forward Control models. Perhaps the FC was so odd-looking that Kaiser had to remind folks that a Forward Control really is a "Jeep". 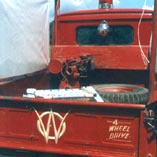 The use of "4 WHEEL DRIVE" stencils on Jeep trucks roughly parallels their use on CJ's. See the 1947 drawing (70K GIF) showing the location on the 4T truck tailgate. Here is a 1954 fire truck from Hartwick, NY with original paint and early-style stencil. 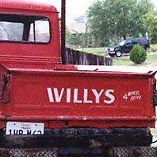 Rick Grover of Arizona sent an interesting addition to our survey of stencils: "There is a never-repainted mid-50's truck in a junkyard 40 miles from here that had "WILLYS" in white in the center of the tailgate. This replaced the WO logo that was stamped into the metal until Kaiser bought Willys. Over on the right side is the 4 WHEEL DRIVE. Dan Kravitz's 1955 truck has a faithful reproduction of this stencil."

This is the most aggressive use of the WILLYS logo we have seen, dwarfing the second 4 WHEEL DRIVE stencil. 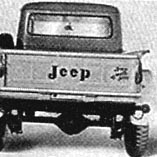 This is the version of the second stencil with "Jeep" atop, seen in an advertisement on page 84 of Foster's The Story of Jeep. It is barely visible on the tailgate of a one-ton truck but the date of the ad is not given. My guess would be about 1961. 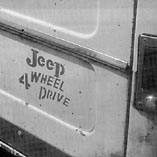 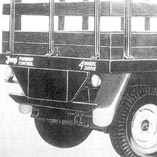 On this circa-1957 Forward Control FC-150, the "4 WHEEL DRIVE" is in slightly different form with the "WHEEL DRIVE" on straight base lines, as seen in the chart above. On the left rear the word "Jeep" in ultra-bold Roman lettering precedes "FORWARD CONTROL". 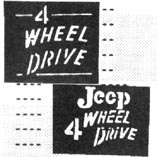 I believe most or all vendors (see Parts Sources on CJ3B.info) are selling stencils for the two logos as shown in this illustration from the Beachwood Canvas catalogue. A word of caution on the using the second stencil: the logo "Jeep" is seen on its own line in very bold lettering above "4 WHEEL DRIVE", for use on trucks or station wagons. To be correct on any CJ the "Jeep" logo on top should be masked off on the stencil so only the "4 WHEEL DRIVE" section is used. -- Bart McNeil


Dave Miles produced a vector-based version of the early stencil, using the blueprint at the top of this page and creating a cleaned up file with AutoCAD. Download an Adobe Acrobat PDF file (12K) of the new drawing. He says, "I scaled the drawing to an original stencil I found on my 50 CJ-3A. The PDF file allows anyone to print out an exact size copy (on letter size paper)."

Mike Perry created a stencil by hand (right) to reproduce the lettering on his 1959 CJ-5 after repainting, and has made the pattern available here for download by those who might want to cut their own stencil. Mike says, "I had a sign painter friend paint mine with "Sign Painters Paint - Gloss Black" using a brush (30K JPEG). I'm sure that one could use any enamel spray paint as well." See a printable actual size version of the stencil (12K GIF).


Original Reproductions offers both printable stencils and permanent vinyl decals for a number of Jeep stencils.

Thanks to Jim Marski and everybody who offered information on their own tailgates, especially to Lawrence Wade, Jim Allen, Simon Bruton and Michael Perry. Thanks to Bart for collecting the history of the stencils. -- Derek Redmond