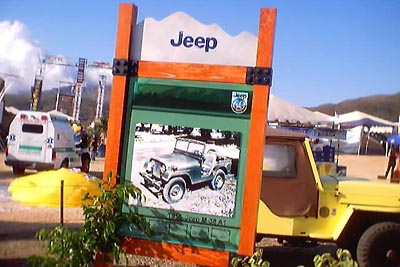 The second Venezuela Off-Road & Adventure Festival was held during April 2002. It featured some high-tech show vehicles (see the Venezuela 4x4x4 Adventure Hummer, 60K JPEG) but also included lots more CJ-3Bs than you would normally see at this kind of a show in North America. Jeep's 60th Anniversary display featured some locally-recruited high hoods. 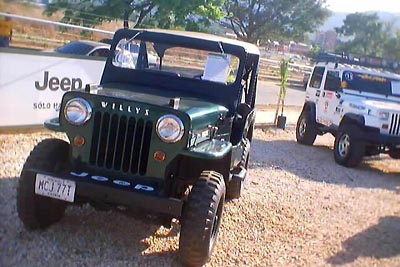 Luis Miguel's CJ-3B (see Jeep for the Avila Mountains) with new 7.00x16 NDT tires, held its own side-by-side with a heavily-accessorized, wide-track Wrangler. Luis says, "There was my Willys and another 10 Willys more.It was the 60 Anniversary for Jeep so they wanted some Willys for the exposition, and they found me to show my Jeep. I painted my Jeep just a month ago, and I put on the original-style 7.00 tires and a Jeep logo in the front." 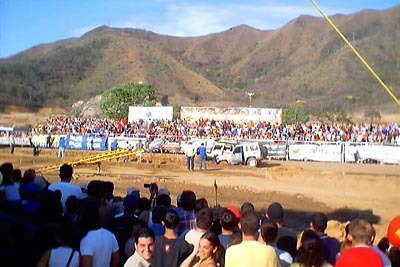 Organizers were estimating attendance at 80,000 people over two weekends in April. This photo by Luis shows the crowd watching an event on the off-road track.

Below are Luis' photos of other CJ-3Bs in attendance. Click any photo for a larger copy (60K JPEG).

Thanks to Luis for the photos. See also more photos of Jeeps in Venezuela on CJ3B.info. -- Derek Redmond

Last updated 25 May 2002 by Derek Redmond redmond@cj3b.info
https://cj3b.info/World/VenezuelaFestival2002.html
All content not credited and previously copyright, is copyright Derek Redmond