YA 054 prototype, built in the Netherlands

In 1951, just after the Willys M38A1 went into production in the U.S., the Dutch company DAF tried to develop their own 1/4-ton 4x4 vehicle, to add to their successful line of large military trucks. Van Doorne's Automobiel Fabrieken (DAF) pinned their hopes on this new vehicle being the front-running candidate to replace the old Willys and Ford jeeps the Royal Dutch Army had in use. 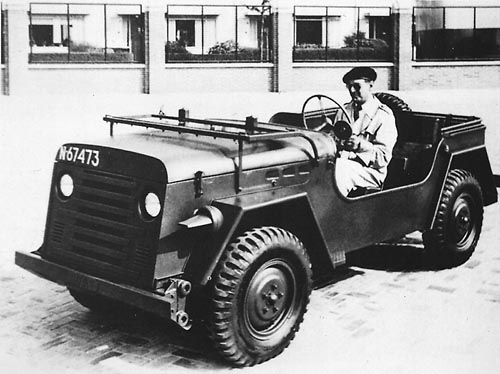 The DAF factory built two YA 054 prototypes, the first of which (photo at right) makes the high hood of the Willys Jeep CJ-3B look dainty by comparison. 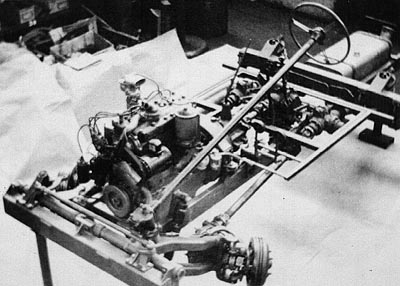 This "light terrain vehicle" had the "H" drivetrain that DAF had used on the YA 318 and YA 328 3-ton trucks. This system consisted of a central differential connected to two distribution boxes located at the sides of the vehicle. These distribution boxes were connected to front and rear wheels by means of four small driveshafts along the sides. The driveshafts to the rear wheels could be disengaged for two-wheel drive. 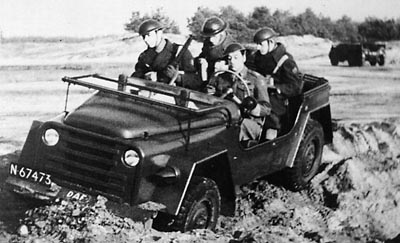 Photos seen here indicate that the army tested a second prototype which had been given a nose job to improve visibility and make its appearance less tank-like. It carries the same license plate beginning with "N" indicating the province of Noord Brabant (where DAF is located in the city of Eindhoven.) it's unclear whether that means it was in fact the same vehicle with modifications.

Without the need for large central driveshafts, ground clearance was good, and with a three-speed gear box and high- and low-range transfer case the vehicle performed well on rough terrain.

The Royal Dutch Army, however, elected to buy the Willys M38A1 because the YA 054 was apparently never approved by NATO (see Military Jeeps in the Netherlands). Without the support of its own country's military, DAF did not move the project beyond the prototype stage. As of 2014 the company is still a major truck manufacturer in Europe.

Thanks to Cor Streutjens for locating and translating information which has not been readily available until now, on this interesting vehicle. Thanks to Dirk Munk for additional details. -- Derek Redmond

See also Jeeps in the Netherlands on CJ3B.info.

Return to Jeeps Around the World or see CJ-3B and M606 Military Jeeps on CJ3B.info.