Promoting Farm Jeeps in the Netherlands 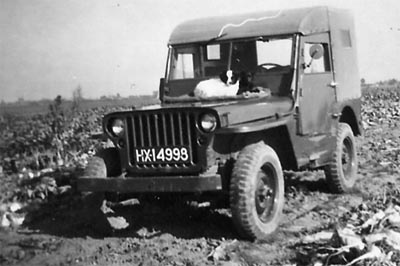 In the early 1950s an estimated 2,200 jeeps were employed in Dutch agriculture, most of them from Allied surplus stocks. However, many farmers exchanged their jeep for an agricultural tractor over time because of the better price to performance ratio. A.P. Kroft of the Ministerie van Landbouw (Department of Agriculture) wrote in 1947 that for use as a tractor the wheels of a jeep are too small, the vehicle cannot take short turns, the transmission mechanism can easily overload, and furthermore the fuel was too expensive. In 1954, the price of a new CJ-3B was 8,375 Dutch guilders, while a light tractor could be purchased for 7,000. 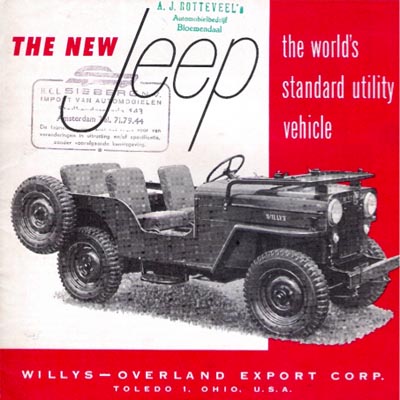 When Willys Overland launched the CJ-3B in January 1953, there was little interest in the Dutch agricultural sector for the new Universal Jeep, equipped with the Hurricane engine. Willys-Overland's technicians had placed the larger half-head, half-side valve engine in a Willys CJ-3A by raising the bonnet and grille, adjusting the bodywork, and reducing the windshield frame. The CJ-3B did become very successful as an American export, and was described in brochures as an "economical workhorse."

In the Netherlands, the first CJ-3Bs were imported by H.C.L. Sieberg from Belgium, where the Jeeps were assembled by S.A. Ateliers de la Dyle in Leuven. This copy of a Willys-Overland Export brochure carries the stamp of importer Sieberg. 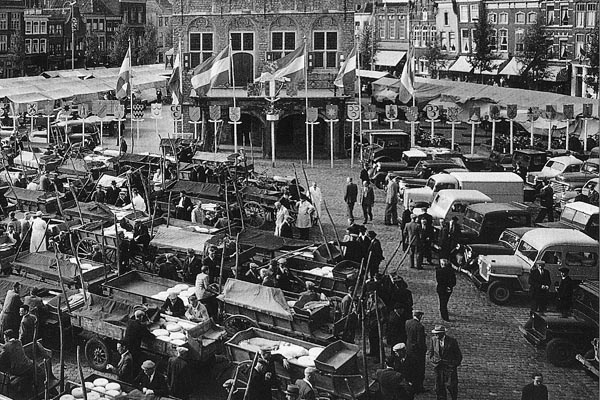 The famous Gouda cheese market in South Holland is seen here in 1954, with farmers bringing cheeses for sale to traders. It is interesting to see that the transition from horse drawn wagons to motorized transport is in full swing. Most of the jeeps seen are Allied surplus, but the cream-colored hardtop Jeep is an extended Netherlands Kaiser Frazer (NEKAF) CJ-3B. 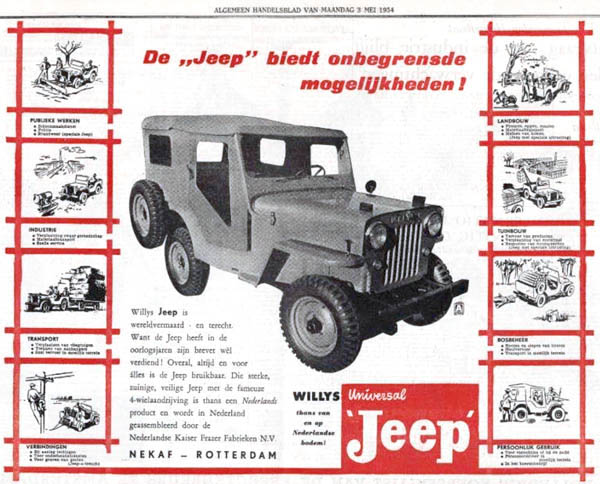 The NEKAF factory at the Sluisjesdijk in Rotterdam, assembled the Universal Jeep and other Jeep models from 1954 to 1959. The Jeeps were destined for the domestic market as well as abroad. In the period 1954 to 1957, NEKAF assembled 5,950 Jeeps: 5,272 M38A1s for the Dutch army, 525 Jeeps for export, and 153 pieces for the domestic market. Production figures by model or for later years are unfortunately not available.

Following the bankruptcy of NEKAF in 1958, the import and assembly of the Jeep line went to Kemper & Van Twist Diesel NV in Dordrecht, and in 1963 production stopped. 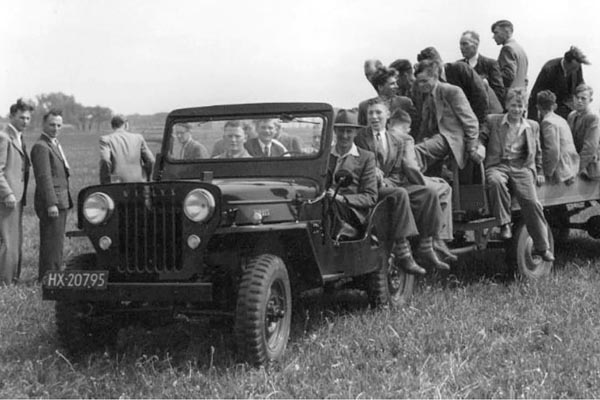 In order to bring the CJ-3B to the public's attention, NEKAF had a few Jeeps available for demonstrations in the country. Usually, local dealers were involved in these events. Registration plate number HX-20795, seen here pulling a huge load (100K JPEG) of enthusiastic young men, was registered in the name of NEKAF. Additional city marker lights were mounted on the front fenders, and Bosch direction indicators on the windshield frame. 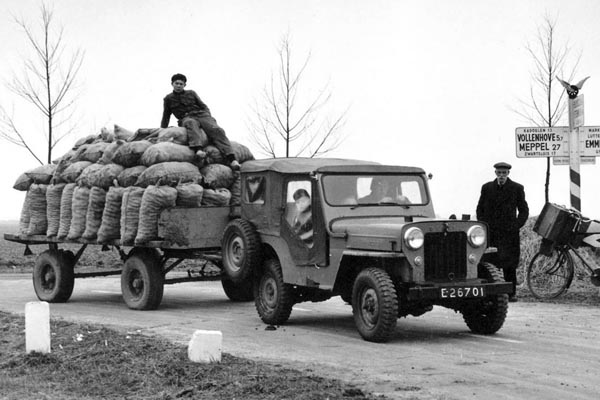 A farm in the Noordoostpolder had a Jeep demonstrator for some time, through B.J. Schurink in Zwolle, the Willys-Overland dealer for the district. The Jeep was immediately deployed for transporting bags of potatoes and picking up the harvest.

All these rare archival photos are from the collection of Joop de Ruiter Volkel.

A chaff screen in front of the grille kept the radiator clean, to reduce the risk of the engine running too hot. A front bumper weight kept the front wheels under pressure. 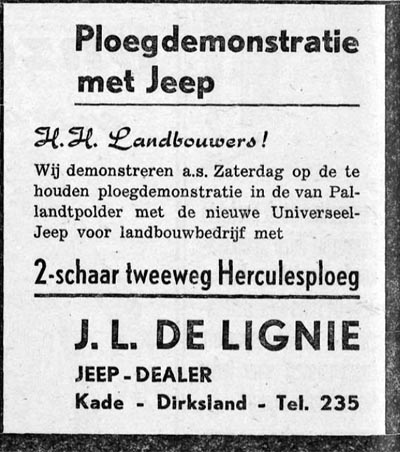 J.L. De Lignie, the Jeep dealer in Dirksland in South Holland, saw a chance to demonstrate the plowing abilities of the new Willys Universal Jeep model CJ-3B, when the Youth Organization of the Dutch Society of Agriculture held a plowing competition for tractors on 23 October 1954 in the Pallandtpolder, near Middelharnis. 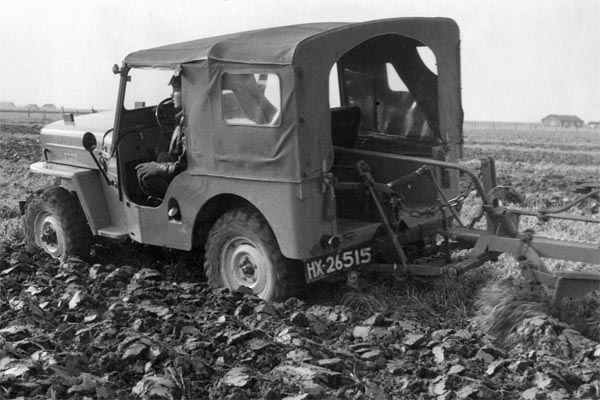 The local Hercules agricultural equipment factory provided a 2-piece tilt plow, and Lignie found Henk Ardon (then 15 years old) who was willing to enter the Jeep in the young farmers competition. Eight tractors appeared, and... one dark red Jeep. The CJ-3B was equipped with a Monroe hydraulic lift for operating and transporting agricultural implements. 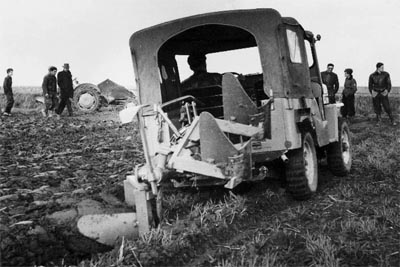 Everyone was apparently impressed by the Jeep's performance -- the furrows were straight and the correct depth. The Willys Jeep managed to achieve fifth place in the plowing match and that was a nice achievement for young Henk Ardon.

The Jeep was owned by NEKAF in Rotterdam and was loaned by Lignie to the Ardon family for fourteen days. Henk Ardon (now 78 years old) still retains good memories of the weeks with the Jeep. His father eventually preferred a tractor, and Henk later used the tractor to become 1966 Zeeland plowing champion (400K JPEG, clipping from ZLM, 9 Sept 1966, via Krantenbank Zeeland). 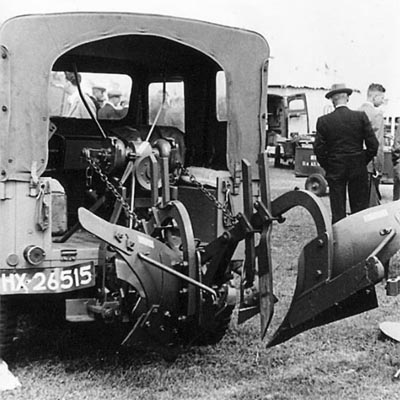 However, the Dutch reluctance to adopt Jeeps as a long-term tractor replacement, reflects Willys-Overland's similar experience with promoting the Farm Jeep in North America. Rather than operating one "Universal" vehicle which could fill several roles, most farmers found it more efficient to have a tractor optimized for field work, a pickup truck for transport, and perhaps a sedan for going to church on Sunday.

Thanks to Jan Hogendoorn for his research, and to Joop de Ruiter Volkel for the photos. -- Derek Redmond

Last updated 5 May 2017 by Derek Redmond redmond@cj3b.info
https://cj3b.info/World/NEKAFFarming.html
All content not credited and previously copyright, is copyright Derek Redmond