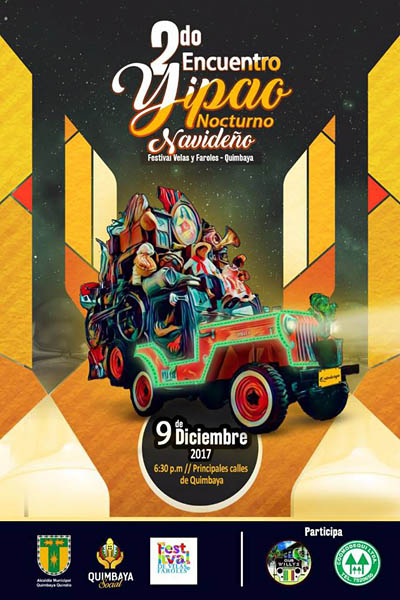 December 2017 was the 2nd annual Christmas nighttime Yipao (Willys parade) in Quimbaya, which is about 20km north of Armenia in the department of Quindío. The parade was organized by Club Willys Quindío, as part of Quimbaya's Festival de Velas y Faroles ("Festival of Candles and Lanterns").

Club Willys Quindío was formed in 2015, and counts about 350 Jeeps in its membership. The club estimates that in Colombia there are more than 2,000 Willys Jeeps still working every day, particularly in the agricultural sector and particularly in the coffee producing zone, of which Quindío is part (see a map of Colombia, 250K JPEG.) But most of the Jeeps in the club are now used mainly for recreation. 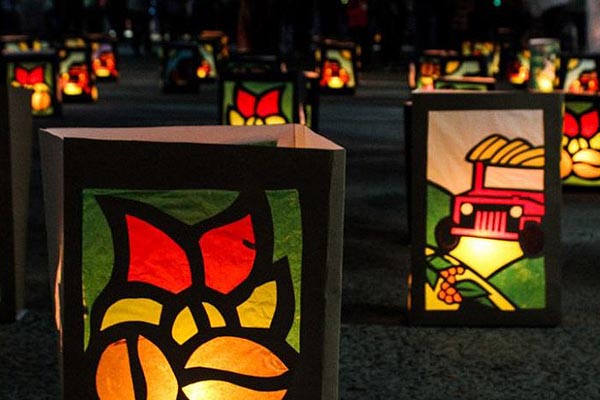 During Festival de Velas y Faroles, the streets of Quimbaya were already filled with thousands of colorful paper lanterns, but things were about to get even more colorful when the caravan of flatfenders headed through town. 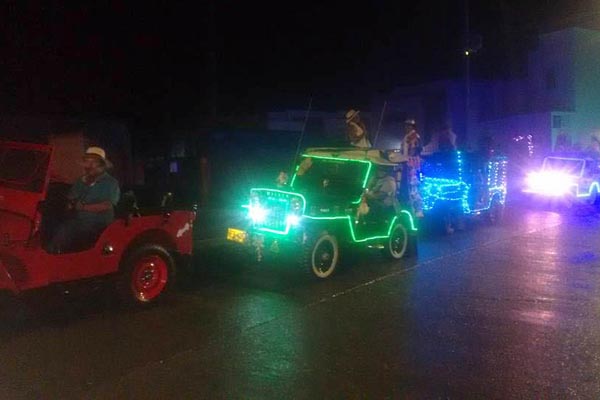 For some of their Willys caravans, the Club gets over 200 Jeeps, but the Christmas parade requires a lot of preparation to decorate and light the vehicles, so about 40 Jeeps made the trip to Quimbaya on 9 December. 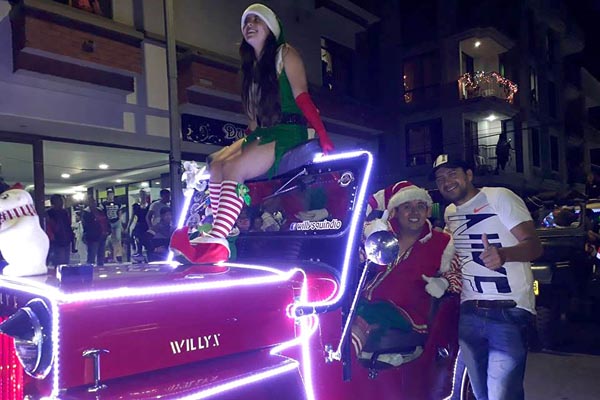 Lots of family and friends ride along, and some of the Jeeps are prepared to do the pique, which refers to driving and even spinning around on two wheels (see below).

Thanks to Javier Tello for this photo, and Willys Quindio and Dany Manrique for the photos below. 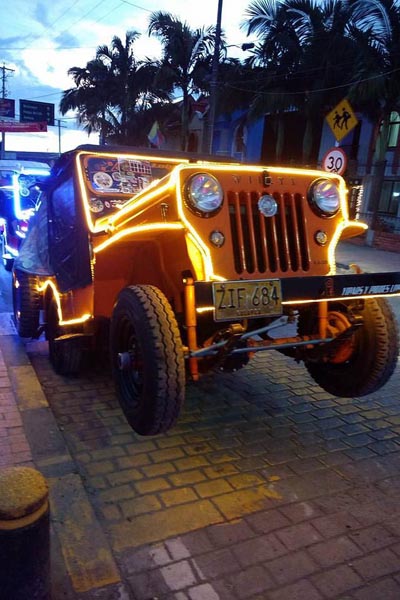 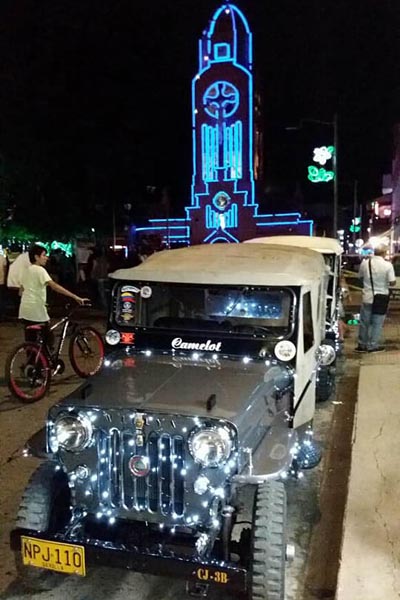 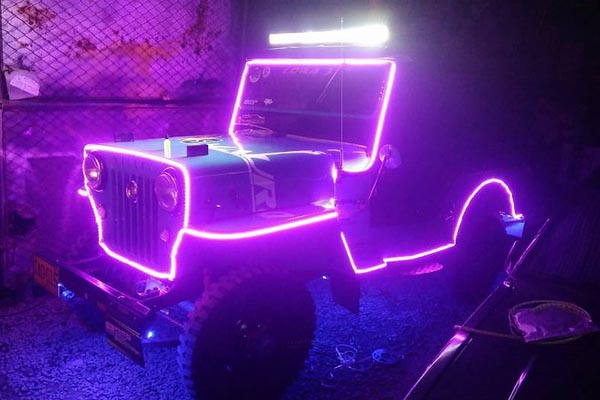 Rope lights have become a popular way of lighting the Jeeps, and are also used to decorate the church in the center of town (above).

The year 2017 was an exciting one for the Catholic Church in Colombia, with Pope Francis visiting the country for six days in September. (See what happened on that visit, in Jeepney Popemobiles.) 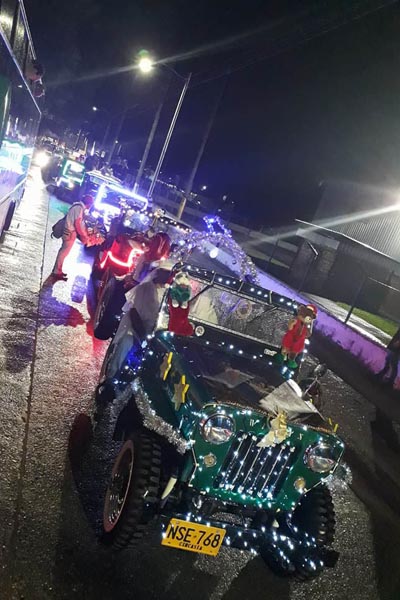 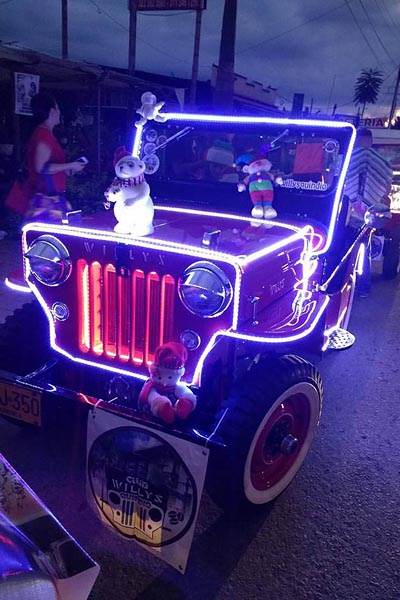 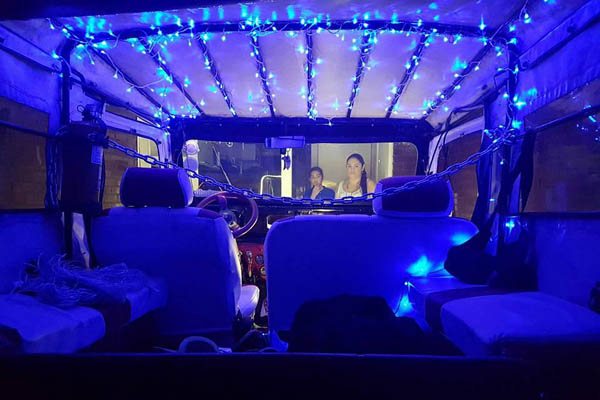 As well as the rope lights, there are strings of sparkling lights, stuffed toys, nativity scenes and more. Colombians always enjoy decorative accessories on their Jeeps, like chrome headlight shades and luxurious interiors, so the Christmas decorations are a natural extension of that. 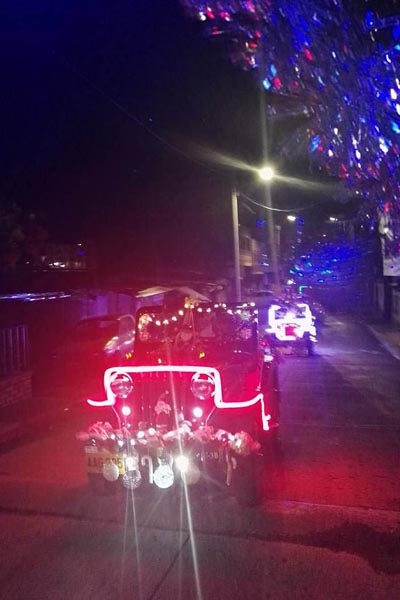 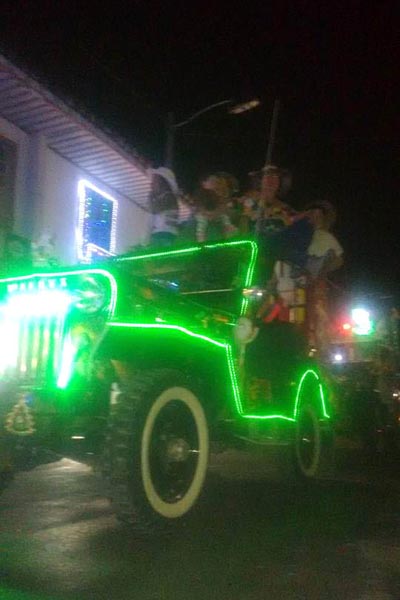 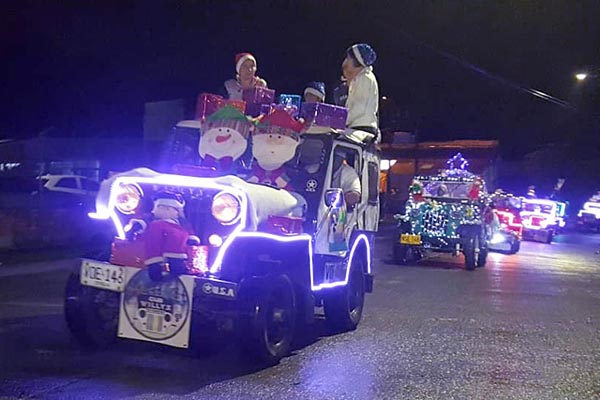 Thanks to Adriana Milena Diaz Rodríguez and Hector Muñoz for the two photos above, and Dany Manrique for this last one.

The artificial snow on the hood of this Willys is the only snow you're going to see, since daily low temperatures in December are around 63°F (17°C), with highs around 77°F (25°C).


Thanks to the members and photographers of Club Willys Quindio. -- Derek Redmond

Note: The club is currently having a dispute with the organizers of the country's largest Yipao, held in July during the National Coffee Festival in Armenia. They don't agree that every Willys should have to pay the entry fee being demanded, and are threatening to boycott the event and instead participate in many of the smaller parades held during 2018 in other towns. Stay tuned.

If you like nighttime parades, see The Popemobile at Night (which has been a hidden page on CJ3B.info, unknown even to Google, who will probably find it now.)

Return to Jeeps in Colombia or to Willys Event Reports.

See more Christmas Over the Years on CJ3B.info.