One of the highlights of Jeep history in Australia is an expedition that took place fifty years ago. Three Jeeps became the first vehicles to make an east to west crossing of the Simpson Desert, in the center of the continent. This crossing was repeated for the first time since then, on the 50th anniversary in July 2019, and CJ3B.info was there to document The 2019 East-West Simpson Desert Expedition. 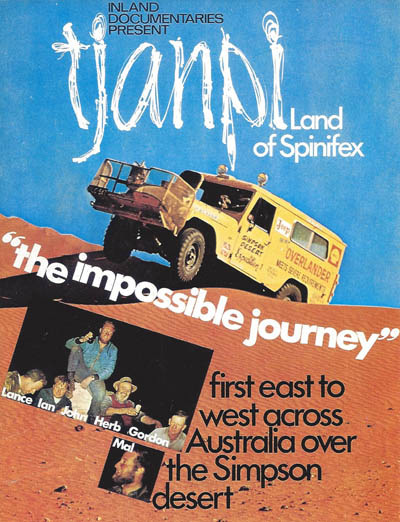 The 1969 team consisted of leader Ian McDonald, naturalists Lance Cockburn and Malcolm Wilson, filmmaker John Eggleston, cartographer Gordon Gant, and mechanic Bob Whinham from the Willys Motors Australia factory in Brisbane. The trip began on 9 April 1969 at Toowoomba, Queensland (near Brisbane on the east coast) and headed for Alice Springs in the Northern Territory.

The crossing was captured on film for a 60-minute documentary titled Tjanpi: Land of Spinifex. (Tjanpi, pronounced "jumpy", means grassland, and spinifex is a particularly spiky grass that grows in clumps in the desert.) See an excerpt from the film below.

Guy Campbell, General Manager of the Willys plant in Brisbane, wanted to promote the Australian-designed CJ-6 Overlander, and approached Ian McDonald, who ran outback tours. Ian had for many years thought about crossing the Simpson the more difficult way, east to west. But he felt the 4WD vehicles available in Australia were not capable of doing it, and several failed expeditions support this claim. Having seen the Overlander, he thought it was the right vehicle -- it had a 100-inch wheelbase, and a good power to weight ratio when custom fitted with a 221 cu.in. Ford Falcon engine. (The largest Falcon motor normally installed in the Overlander was 188 cu.in.) 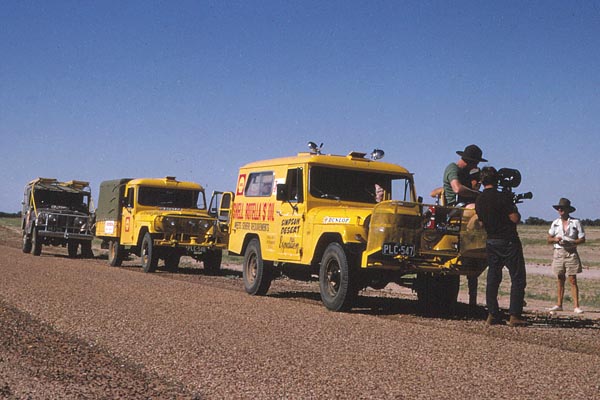 Two of the vehicles were Overlanders, with 140-gallon fuel tanks and 50-gallon water tanks added in the back, plus radiator overflow tanks and dual batteries. The one with a van body was nicknamed "Rhino" because it could barge through whatever was in the way -- with a seat for the cameraman on the front bumper!

The second Overlander was in the popular "ute" or utility pickup configuration, and was named "Hippo" due to the load it carried. The third Jeep was a CJ-5, known as "Syco" because it had a mind of its own. 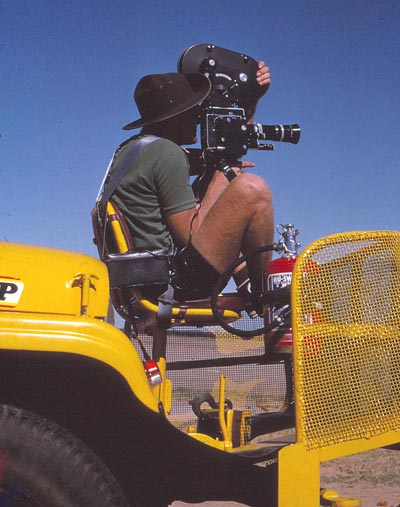 John Eggleston used a Bolex 16mm film camera, to document the Jeep trip and the many distinctive plants, animals and birds identified along the way by the naturalists.

Here he's equipped with the full Bolex package including zoom lens, 10-minute film magazine, electric motor, pistol grip, and battery pack over his shoulder. But the Bolex is uniquely able to shed accessories, becoming a small camera powered by a clockwork spring motor when the batteries run out. Perfect for a long expedition in the bush.

These photos were taken by Malcolm Wilson, whose main interest was photographing birds, but who also took most of the photos on this page. 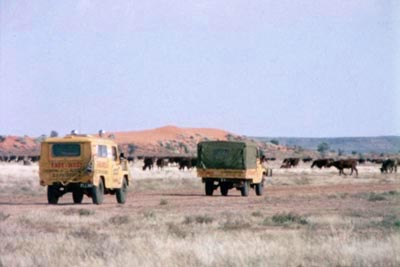 The film features only the two yellow Overlanders, which Willys Australia wanted to promote. They're seen here in a frame from the film, as they approached the desert. 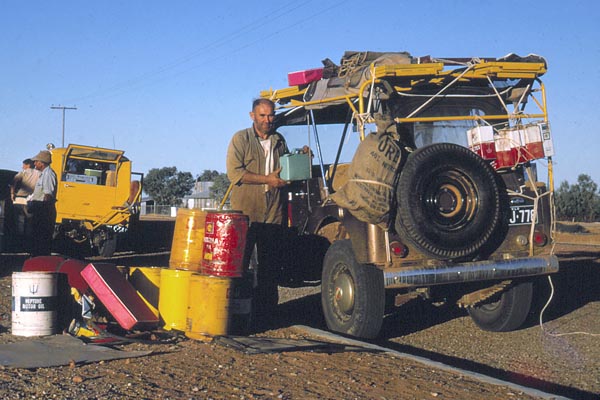 Birdsville, Queensland on April 15 was the last chance to fuel up before hitting the dunes, and Bob Whinham also stocked up on other necessary fluids. One, of course, was water, which had to be severely rationed during the crossing.

The canvas doors and the steel "sand ladders" were strapped to a framework over the metallic brown CJ-5 Sportster (note the hubcaps and chrome bumper.) 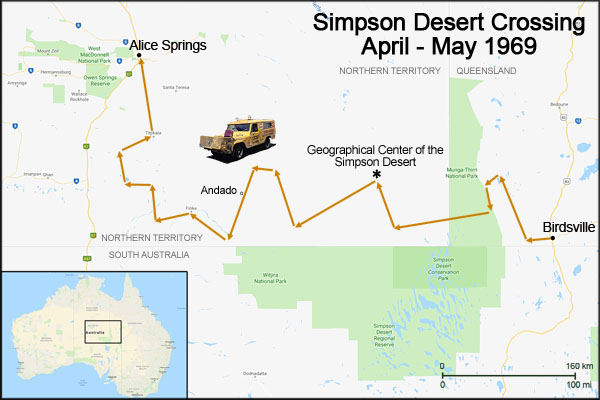 The team followed desert tracks from Birdsville to a suitable point to enter the dunes, and headed west for almost 100 miles. They turned northwest, parallel to the dunes, to the center of the desert. Then southwest across the ridges again, until they reached tracks they could follow to Andado and Alice Springs. 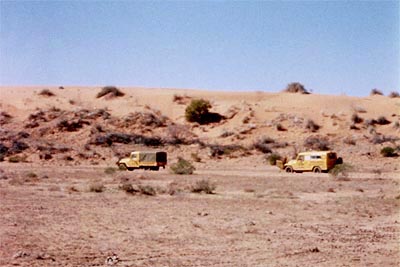 More frames from the film: here Hippo and Rhino drive parallel to one of the red sand dunes of the Simpson, which can reach 300 feet in height. 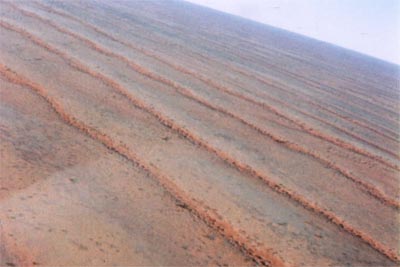 John took his Bolex up in a small plane to capture an aerial view of some of the 1,100 dunes, which all run northwest to southeast. This is due to a prevailing southwest wind which forms a gentle western slope of sand, and a steep eastern dropoff. Thus the east-west crossing is much more challenging because you have to climb the steep side. This is difficult even on vehicle tracks near the edges of the desert, but particularly here in the center where there are no tracks to follow. 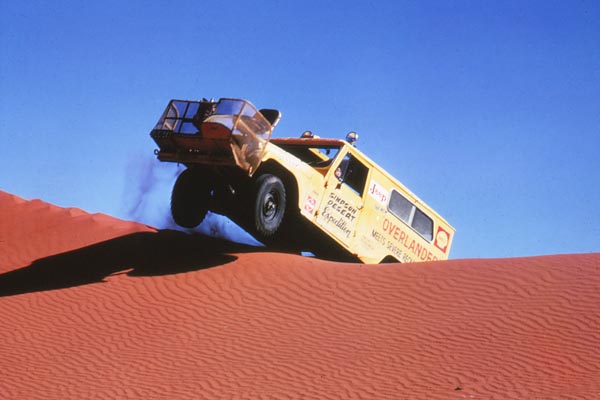 See a 3-minute video excerpt (30MB QuickTime) from the film Tjanpi: Land of Spinifex, showing Rhino's slow climb to the top of a dune, followed by a quick descent. 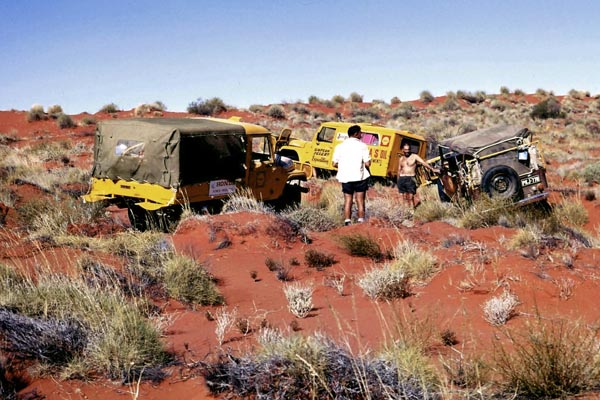 For many of the dunes, the team had to lay the steel sand ladders down to allow the Jeeps to get a grip in the sand.

In attacking a tough slope on 26 April, Rhino and the CJ-5 suffered broken Warn freewheeling hubs. Parts were taken from Hippo so that the other two could continue, while Hippo was left behind, with any unecessary gear under the rear canvas.

At Andado, front drive flanges were salvaged from the remains of two WWII jeeps, and the team backtracked for two days to recover Hippo. 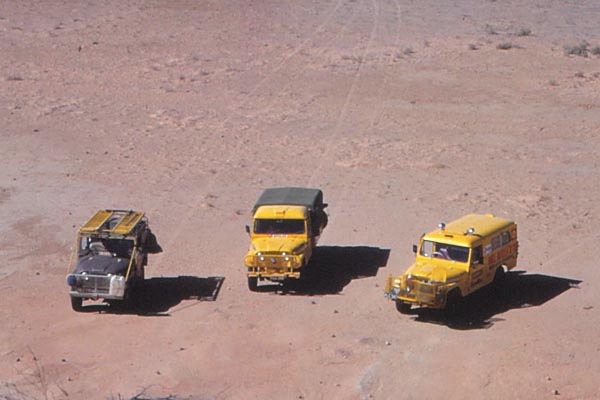 "We left camp soon after daybreak this morning and climbed back up the ridge that had caused us so much grief the previous day. Just before we passed over the top we looked back down at our camp site at Hippo sitting there quite forlornly, abandoned in the bottom of that deep inter-ridge valley. It is the only vehicle that hadn't broken down and it is being abandoned for now, but then it is the only vehicle that hadn't tried to climb the ridge." 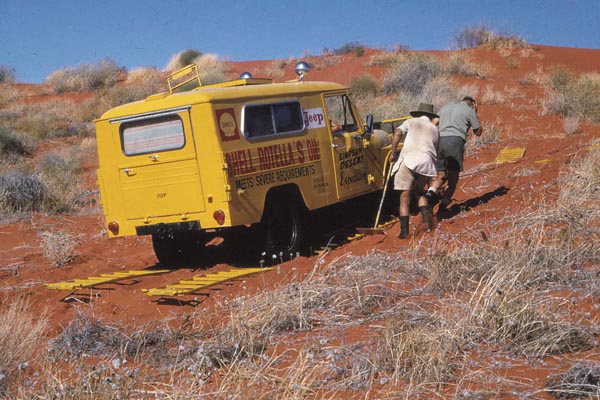 "Conditions in the desert continue to deteriorate and the ridges grow higher and higher until we come to one huge ridge that we have been looking at ever since we had entered that region of the desert. It towers above all others before it, but it wasn't until we arrive at the foot of it that we realise how enormous it is. It has built up in three layers, with ridge upon ridge upon ridge rising over 300 feet above us. It is certainly impressive, but it doesn't faze us, we just look on it as having to climb three ridges instead of one...." 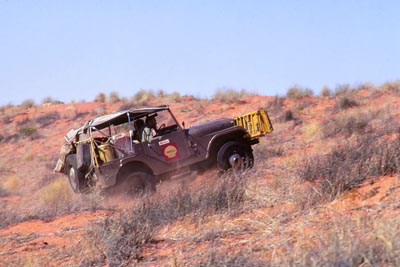 Here, Syco the Sportster has the sand ladders ready on the front bush bar. The rear is stocked with fluids, and it looks like the spare has been used to replace the right rear wheel. Tire pressure was normally kept at 15 PSI in the sand. 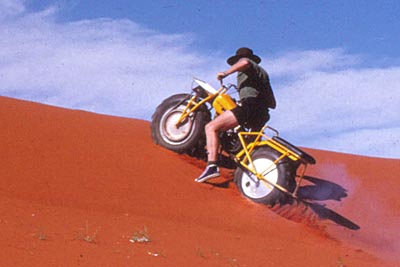 To scout the best route up a dune, they used a Rokon Trailbreaker, a two-wheel-drive off-road motorcycle built in the USA which can climb almost anything but has a top speed of only about 20 MPH. 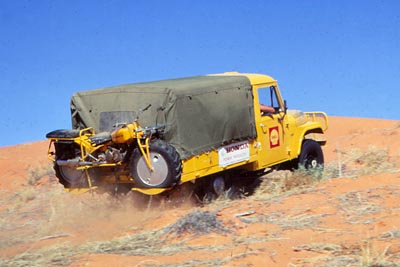 When not in use, the Rokon bike was part of Hippo's huge load of gear. The Rokon's wheels are also tanks, which each hold 2.5 gallons of gasoline or water.

The Overlanders' gas mileage across the dunes averaged about 4.5 miles per Imperial gallon (3.8 MPG US). 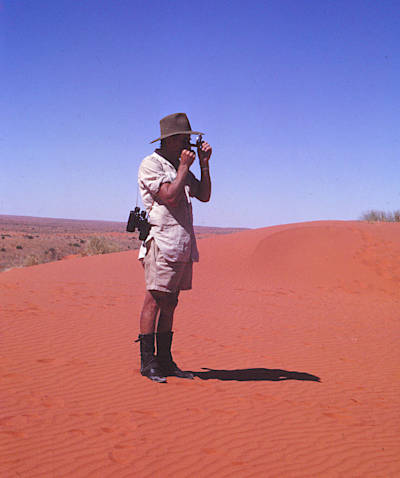 For navigation there was a Nova-Tek non-directional beacon (NDB) finder fitted to Rhino. It can just be seen on the dash in front of the gearshift in a photo of Ian in the Jeep (200K JPEG) using the Royal Flying Doctor Service two-way radio (call sign 9QLG). A floating compass is near the top of the windscreen.

There was an NDB installed at Andado on the western edge of the desert, and Ian and his crew were able to connect to this NDB with their beacon finder each night. An NDB does not give co-ordinates but when a finder connects to it, it shows the direct line between the beacon and finder. Gordon Gant would then take a reading next morning with a lensatic compass (right) and that would determine the route for the day. Photos/Australia/Simpson/GantCompass.jpg

Due to the zigzagging it was necessary to take daily readings from the NDB to ensure they maintained a westerly direction to Andado. The compass on the windscreen was used during the day just as a check to ensure they were not straying too far off course. 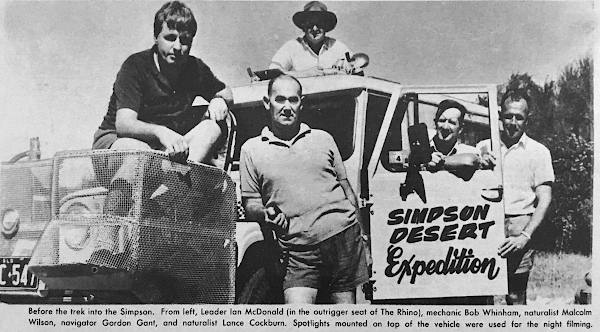 The team, with the exception of John, the filmmaker, is seen in this newspaper clipping from one of many articles published at the time. 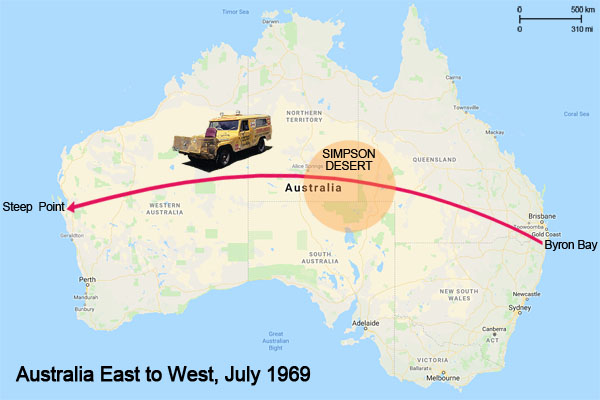 Having proven that the Simpson could be crossed east to west, the same group decided on a cross-continent expedition, which left Byron Bay, Queensland on 12 July 1969.

This time they crossed the Simpson on a track closer to the northern edge, rather than tackling the heart of the desert again, and continued to follow desert tracks across Western Australia to Steep Point. 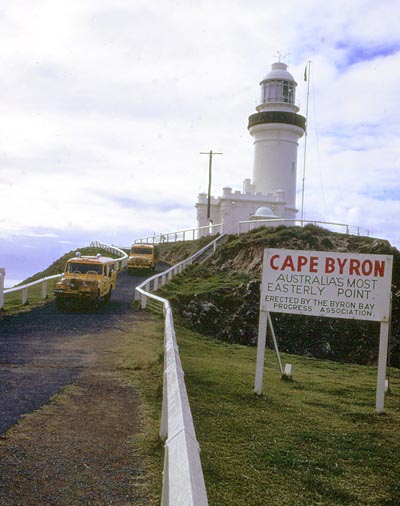 The well-known, still-functioning lighthouse at Cape Byron, overlooking Byron Bay, is the easternmost spot in Australia. It is also the brightest lighthouse in the country, and a good spot for watching humpback whales.

The Jeeps posed for photos at the top of the hill, and then headed west for the first part of the trip, on paved roads. 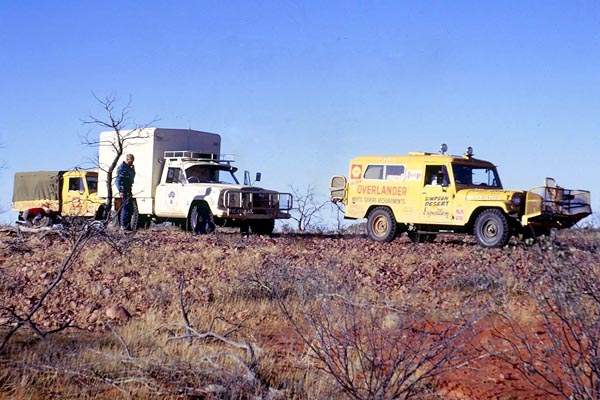 The two CJ-6 Overlanders from the first crossing were used once again, but the CJ-5 was replaced with a larger Jeep J300 truck with a custom body, as the support vehicle and filmmaker's vehicle.

Herb Fraser was the mechanic this time. He had plenty of minor and major problems to deal with in the next few weeks. 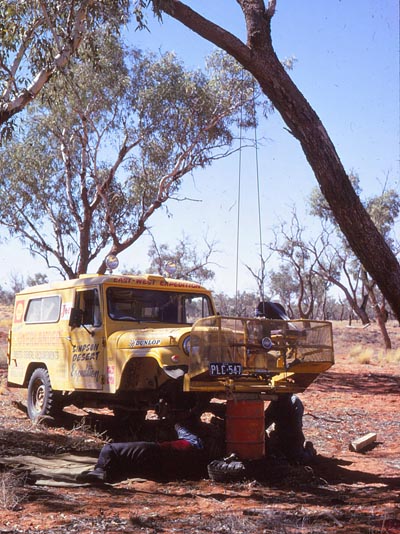 At the Finke River, luckily not far from Alice Springs, Rhino broke down while towing the J300 truck which was also having problems.

"Ian and John got bogged, heard a noise and found it to be the teeth chewed off at the end of the axle. We threw the winch over a coolibah tree and the Rhino winched herself up so that Herb could get under and inspect the damage. It took the best part of a day to replace the axle. The planetary gear in the front diff is slightly damaged so we have to wire for parts in Alice." 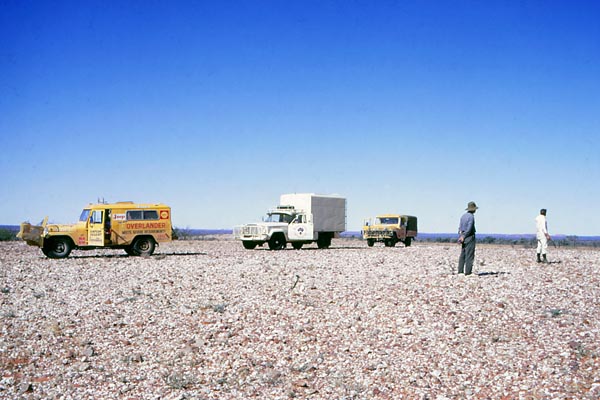 The three Jeeps reached Steep Point and the Indian Ocean on 24 August 1969.

The 50th anniversary of the 1969 crossing of the continent and of the Simpson Desert was celebrated in July 2019 with the "BF Goodrich East to West Expedition" starting in Byron Bay and following a route very close to the original desert crossing. CJ3B.info was there to document the 5-Jeep expedition -- see Part 1 of The 2019 East-West Simpson Desert Expedition.

See also "We conquered the Simpson" -- a 1969 magazine article, and an Overlander brochure based on the Simpson trip.