The Transformers:
More Than Meets the Eye

In the mid-1980's a new type of toy hit the North American market. Quickly reaching "toy of the year" status, Transformers were a whole new way of playing good guys and bad guys by combining toy cars and action heroes into one toy. But where did they come from? Here's a look back at the Transforming Robot Jeeps.

The story of the Transformers began long before the Autobots and Decepticons crash landed on Earth. The toys that we know as Hasbro's Transformers originally were part of two separate toy lines in Japan. As far back as 1974, Microman toys were manufactured by Takara with a New Microman being introduced in 1981. As part of the New Microman line, transforming Micro Change vehicles, including a jeep, were introduced in 1983. The story line involved the good Micromen from Microverse coming to earth to battle evil Acroyears. The characters were only 3" tall in the story, making the toys full scale replicas. The original Micro Change jeep was intended to be a Microman that could disguise himself by transforming into a toy jeep. Having the power to make objects smaller, the Micromen battled the Acroyears (who could make objects bigger), and all of them could disguise themselves as everyday objects including hand guns, little radios, and even music tapes.

While the Micromen were busy with their own war, a very similar line of Takara toys named Diaclone hit the Japanese market in 1980. Insect-shaped aliens called Warudars attack Earth. To battle them, Earthly creatures develop large battling machines that can transform into earthly vehicles for a quick disguise. These transforming trucks, planes, and mechanical dinosaurs were nothing more than mechanised contraptions so they required drivers. The toys came with seats for little (3cm tall) drivers that had magnetic feet. 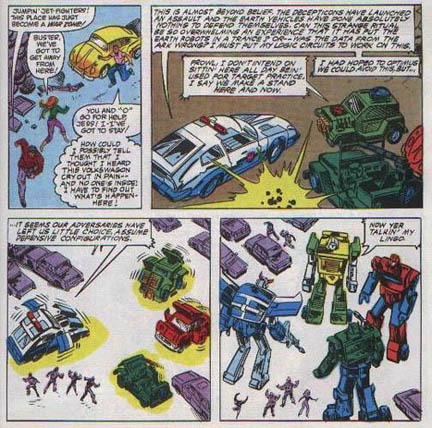 In 1984 Hasbro created the story of the Transformers: the Autobots and Decepticons leave Cybertron and crash land on Earth millions of years ago. They are awakened by a volcanic eruption and begin their fight for Earth. Decepticons are eager to harvest Earth's energy and send it back to Cybertron in the form of Energon Cubes to help in their effort to take over the Universe. The Autobots befriend the humans and try to stop the destruction of Earth by the Decepticons (story starting to sound a little familiar by now).

To help sell the toys which were a mixed bag of part Microman and part Diaclone toys, Hasbro asked Marvel Comics to create a comic book based on the characters. Originally a 4 part mini-series, the comic book was such a hit that it was quickly followed up with a long running series. The popularity of the comic book led to the idea of a TV show, and Sunbrow Productions (owned by Marvel Comics) released the Transformers TV show which led to Transformers the Movie. The battle continues to this day in Transformers: Beast Machines which incorporates many organic creatures into a mechanised world.

Click any of the Transformer Jeep photos below, to see their robot versions. 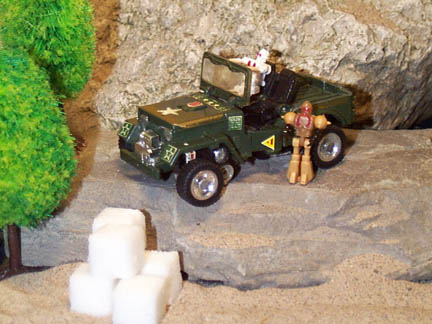 Transformers toys included 4 jeeps, all of which were Heroic Autobots. The largest of these was Hound which was a 1:32 scale Mitsubishi J59 version of the CJ-3B whose function was a scout and was part of the Autobot Cars: "Cool sleek cars that transform into autobot freedom fighters" according to the 1984 catalog. This Japanese Jeep had right-hand-drive and so does the toy. Other Japanese touches on the toy include fender-mounted rear view mirrors, top mounted wipers, and a row of louvers on the passenger side of the body. (See more about this jeep on the Jeeps in Japan page.)

In the photo, Hound locates a stack of Energon cubes. The little robotic men in the picture are similar to the Diaclone drivers that came with the original Diaclone version of this J59 Jeep. The Diaclone jeep also had a "Jeep" license plate sticker and a "J59" tire cover all of which were removed in 1984 for the North American market but can still be seen on the instructions which came with Hound. Note the decal sheet photo (40K JPEG) which has the missiles covering up the Japanese text. And see the transformed robot version. 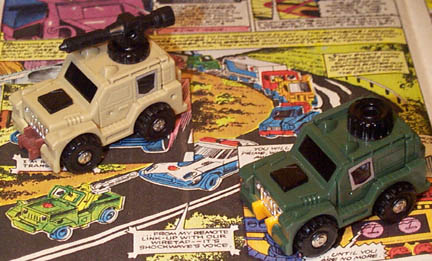 From the New Microman line came Brawn, a green armored jeep whose function was demolitions and was part of the Autobot Minicars: "Small but swift autobots who act as messengers and spies! Don't let their sizes fool you. These tiny but tough Autobots are messengers with meaning." -- from the 1984 and 1985 catalogs.

"To Brawn, Earth is essentially a hostile environment -- and he loves it. Strong, rugged, agile -- the most macho of all Autobots. Delights in challenges. Sorry for those not as tough as himself. Second strongest Autobot -- can lift 190,000 pounds and knock down a small building with one punch. High resistance to artillery fire. Vulnerable to attack by electromagnetic waves." -- from the Tech Specs

In the photo next to the 1984 Brawn is a 1986 Outback, a later release of the jeep, whose function was gunner and now included a spare mounted rifle.

When part of the Micro Change series, the Brawn jeep was a tan color as can be seen in the 1984/1985 catalogs which were based on the earlier Japanese toys. The 1985 catalog picture was touched up to make the jeep look green. 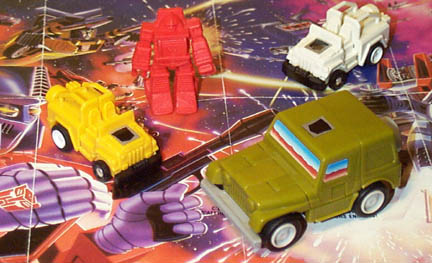 Once Hasbro realised what a hit they had on their hands with the Transformers (they were even a hit back in Japan!) they started to make their own transforming toys to keep up with the new guys in the TV show. (No wonder the show became known as a half-hour toy commercial!) The Hasbro-created jeep toy looked much closer to the jeeps seen on the streets of North America at the time. A hardtop-equipped CJ-7 jeep named Rollbar was part of the Throttlebots: "These speedy little Autobots are packed with power! Pull them back and watch them go!" -- from the 1987 catalog.

"Impulsive, loves to take chances, put his life on the line. Speaks in corny, macho cliches, which unintentionally elicits laughter from the other Throttlebots. Extremely agile in jeep mode; can go into flips and rolls with very little loss in speed. Has built-in chemical sensors, radiation detectors, audio and video recorders to assist his tracking." -- from the Tech Specs

Also in the photo with Rollbar are two Mini Spies (1985) and a red Decoy (1987). These little toys were included as freebies in the second-year release of the first series of toys. The Spies could be Autobots or Decepticons and were made in white, yellow and blue. The pull-back-and-go action was a very familiar product for Takara, as they also made the popular Penny Racers which were ironically marketed by Tonka in North America. The rubber decoys could not transform and were made in red or purple rubber. Brawn (pictured) and Hound were both made into decoys.

A non-transforming Brawn figure was also available for a very short time in 1984 at McDonald's locations in the St. Louis, Missouri area. The toys failed the marketing test, most likely due to many disappointed kids who received Transformers toys that did not transform. 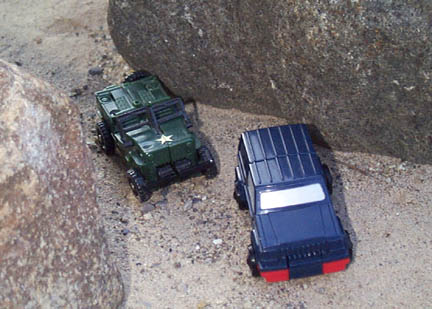 At almost the same time as Hasbro's Transformers, Tonka released the transforming GoBots. With a story of a group of Guardians trying to protect their home planet of Gobotron from destruction by the evil Renegades, the battle comes to earth. (Sounds familiar by now?) A Challenge of the GoBots (30K JPEG) TV series hit the screens and even led to a movie titled GoBots: Battle of the Rocklords, but never reached the popularity of the Hasbro counterparts.

While all the Hasbro jeeps were good guys, GoBot jeeps were of the evil Renegade variety. Geeper Creeper was again a Japanese Mitsubishi Jeep with a high CJ-3B hood and top mounted wipers, 1:64 scale with an incorrect front coil suspension. The Cherokee jeep in the photo named Pow Wow, was a 1985 Wendy's fast food kid's meal toy. Made in Japan by Bandai, Super GoBots or Machine Robo Series (as they were known before Tonka invented the GoBots for the North American market) were a larger 1:32 mostly diecast version of the toys -- but no jeep was included in that lineup.

The Other Transforming Robots 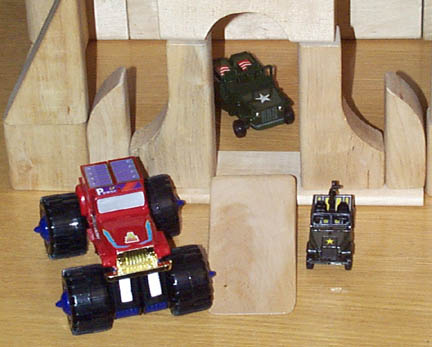 With the transforming robot toys becoming an overnight sensation, the other manufacturers were quick to create their own toys to ride the wave of popularity. These toys had no official toy line names or stories.

MC Toys, owned by May Cheong Toy Products (now known as Maisto) released the "Made in Macau" pull-back-and-go 1:43 CJ-7 with a removable machine gun. The 1:32 green jeep was made by Merry Yard Toys of Taiwan, and was based on Geeper Creeper as it also has the mysterious front coil suspension. This 1986 Dashbot could stand in as a Super GoBot. The red 1:24 YJ is a recent "Made in China" product made to accessorise with the Takara 2000 Transformers Car Robots in Japan.

Another recent imitation was a 1997 re-release of the Maisto Moto-Bots jeep (60K JPEG), this time made in China and without the proper grille and the round headlights. See also the Formulator Force (30K JPEG), a 1999 set of "mutating machines" made in China which included a red CJ-7.

Thanks to everyone who contributed info and toys for this page. Any further info or pictures of transforming Jeeps that I may have missed is always welcomed. -- Jarek Skonieczny 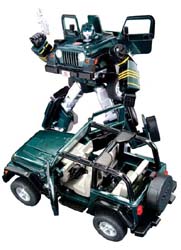 After a gradual decline in the early and mid-1990's, the number of new Transformers toys was steadily increasing again by 2006.

Chuck Gajewski mentioned that there are "three awesome new Jeep TJ Wrangler transformers" included in the Transformers Alternators series announced by Takara in 2003. These toys are more sophisticated and expensive, and aimed more at collectors than at kids. Illustrated here is the new Hound. See also Swindle and Rollbar (20K JPEGs).

Thanks to Jarek for another fascinating excursion into the world of his youth. -- Derek Redmond