The decade that brought us parachute pants and neon socks, the music of Depeche Mode and Madonna, and TV shows like "Magnum P.I." and "The A-Team", was also responsible for a whole range of Jeep toys. While the typical eighties Jeep can be described as a 1/64 diecast CJ-7 hardtop made in Hong Kong, the number of variations and other models make this a decade worth looking back at.

Click on links on this page to see additional photos of individual models (40K JPEGs). 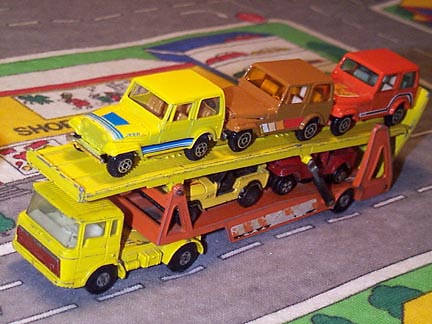 The huge advertising effort by Hot Wheels and Matchbox, battling it out for their diecast car market share, resulted in an increased interest in diecast cars in the 1980's. With all the attention kids were giving the cars, other manufacturers started to get into the business to ride the wave of popularity. Generic diecast Jeeps from Hong Kong started popping up in grocery and drug stores, awaiting kid's allowances -- or lunch money. While most had opening hoods and simple plastic bases, the better-made generics had cast bases with an internal suspension, some of which featured opening doors.

Very similar models to the generics were made by Yatming and could be found in both a hardtop and open-top version. While both had diecast bases with the manufacturer's name clearly marked, the hard top version could be numbered 1603 with an unpainted base or 1602 with a black painted one. The open-top version was numbered 1608. The Yatming Jeeps had either a chrome engine under the opening hood on the hardtop models or separate chrome headlights on the open-top versions.

Zylmex (a brand name of Zee Toys) and Ertl both made open-top CJs, but the Ertl version could be had with a removable plastic hardtop, as well as in TV show versions like Daisy Duke's CJ or an A-Team Jeep. The Zylmex CJ-7 was known as the Bushwhacker and numbered P350, while the Zee Toys CJ-5 was numbered P368. Both have very plain flat metal bases. Ertl blister packs included an invitation to join the Replica Series club, while the back of the package had a full colour trading card with a #30 Renegade CJ-7 for the kids to cut out.

Stock Jeeps wait at an intersection while an "Off Roader" passes through. 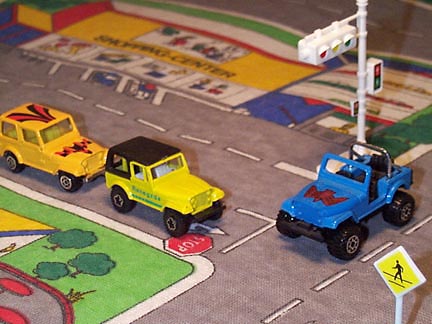 The Ja-Ru CJ-7 was made in China and had the spare tire part of the casting and no opening features. The Playart Renegade featured a plastic hardtop and could be had in a Postal version. Playart, Yatming, and Kidco were all prolific brands during the eighties and many variations exist, but Playart leads the way with 3 distinctive jeep castings - more on the other two Playarts can be found in the Army section below.

While most of the Jeeps were pretty close to 1/64 scale, some castings were definitely larger, adding to the lifted look of the large tires. The Hartoy "Off Roader" for example, was sold as part of the Coke series of China-made diecasts. The blister pack offered $1 off a bottle of Coke, making the toy quite a good deal and the original blister packages hard to find still intact.

In the photo, a Ja-Ru CJ-7 waits behind a Playart Renegade: Hartoy coming though!

CJ-5s comparing their lift kits at a construction site. 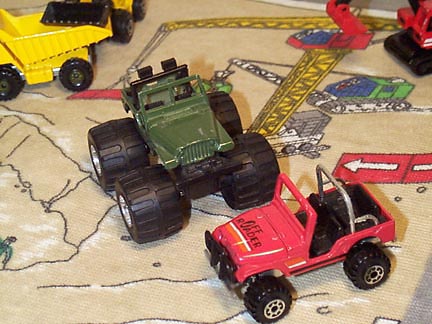 With the excess of the eighties came the monster-truck look. Even Datsuns and Jaguars were put on pickup chassis. Some Jeeps could not escape the 44" mud tires show truck look. Bigger was better and the toys started to show it. The Road Champs "Coyotes" CJ-5s featured an opening hood, diecast base, and a look very close to the Hartoy CJ-7.

Soma monster-truck CJ-5s could also be had in Neon colours and a hardtop. While these models featured no opening parts, the REALLY large rubber tires must have been a hit with the sandbox crowd.

In the photo, a monster truck makes easy work of the construction dirt, leaving the Road Champs with tire envy.

Army Jeeps secure the area while a Seep heads for the water. 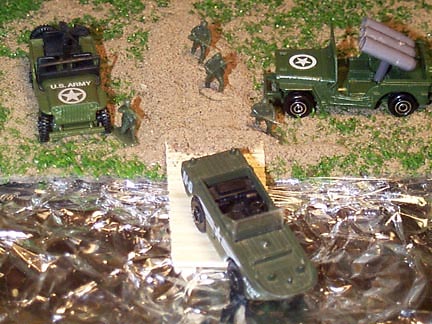 Just as we start to think all eighties Jeeps are CJs, two more versions of the Playart Jeep include the .30 calibre-equipped MB and an amphibious Seep. The MB was also sold as a civilian version without the turret, markings, and without a spare tire. The MB has a plastic folding windshield and a moveable gun. Later versions were sold under the GATA brand and made in Macau instead of Hong Kong.

The rather obscure brand Mini Mite rocket launcher MB was also sold under license of DC comics as a Sgt.Rock edition with a recoilless rifle.

Playart deserves extra credit for making a 1/64 seep casting. This version of the jeep is a rare sight in real life, and even harder to find in "matchbox" scale.

In the photo, a Playart Seep takes a dive while a fellow Playart MB provides cover. The Mini Mite launcher keeps his eyes on the skies. 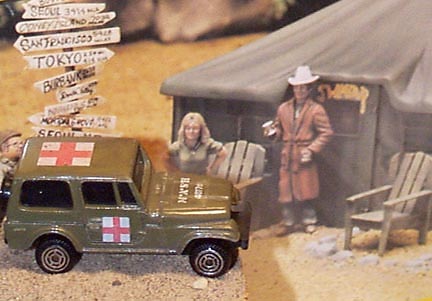 Kidco was an inexpensive line of diecast cars, owned by Universal of Hong Kong. Universal enjoyed quite a popularity in the eighties with their "Burnin' Key Cars".

For a short time they owned the Matchbox brand, and also made "Dinky Toys" using their line of Kidco cars. The Kidco Dinky Toys Jeep features improvements over their standard line of cars, which did not have interiors (hidden by dark windows). Due to poor research on Universal's part, the spare tire is mounted at the location where the hardtop's hatch handle would be. The toy had the Dinky name on the package and also on the plastic base, and featured see-through windows and an interior.

The self-propelled nature of Universal's "Burnin' Key Cars" left the other manufacturers playing catch up. Just at this time Ideal, a long-time plastic toy manufacturer, entered the diecast toy market with their Macau-made Slam Shifters vehicles. The Slam Shifters did require the purchase of a propulsion shifter, and every car came with an emblem to place onto the shifter. The CJ-7 featured large rubber tires in the rear and a gaping hole for the insertion of the Slam Shifter.

In the photo, a Kidco CJ-7 looks out of place during the Korean War.

The end of the eighties -- the "lean and mean" nineties and beyond.

By the time the 1990's hit, Chrysler's effort to gain control over the Jeep trademarks has taken a toll on the little Jeeps. AMC was not very diligent in protecting the licensed grille and Jeep name, allowing anyone free reign to manufacture and market Jeep products. Left unchecked, Chrysler feared that the Jeep name may be lost to "common language", making the beloved Jeep name available to any 4x4 manufacturer.

"Cease and Desist" letters were issued to anyone failing to comply with the trademark rules, and requests for hefty royalty payments caused the eventual death of the eighties Jeeps. Not that the manufacturers lasted much longer, with most of the castings bought out or abandoned. From the above Jeeps, only the Road Champs survived with its grille intact, these days available in a monster truck version (finally satisfying the tire envy from the construction site encounter I guess). The Hartoy, Yatming, and generic Jeeps are still manufactured with checkered grilles, and sold under various "Made in China" brands including Speedy Wheels and Welly. Ja-Ru CJ-7s have also recently re-surfaced, albeit with the number of grille slats reduced -- an attempt to keep the Daimler Chrysler lawyers at bay.

Thanks to Mike Albright, Brian Willoughby, Derek Redmond, and Bob Keniston for some of the Jeeps featured above. Further info on Jeeps from this era would be welcomed. -- Jarek Skonieczny

And thanks to Jarek for an entertaining and well-researched page. -- Derek Redmond