Here are some pictures of a few more of the old Tonka flat-fenders saved from the crusher by master restorer Doug Gagnon. Doug lives in a country home, and when it came time to take some photos of his work, what better idea than to step outside and photograph the Jeeps in their natural habitat?

Take a look at the large versions of the photos as well -- they're beauties. 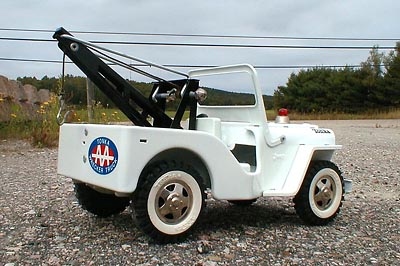 This is a look at the final result of a project Doug has been working on for a while. He says, "The white wrecker was pretty rough -- the bumper was bent, it was missing the left front fender and hood light, the hubcaps needed to be replaced and the tires were badly worn. Not to mention it needed to be repainted and the tow boom was missing (of course.)" 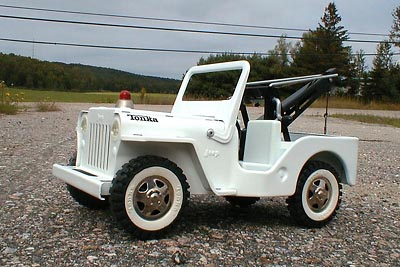 Doug says this is an early 1965 No. 375 Jeep wrecker. Although the white wreckers typically have a black windshield, this one originally had a white windshield, so Doug restored it that way: "The only thing I did that wasn't 100% accurate to the original, is that it originally had those odd fenders that fit both the older and newer bodies -- one was missing so I had to use a set of older replacements." 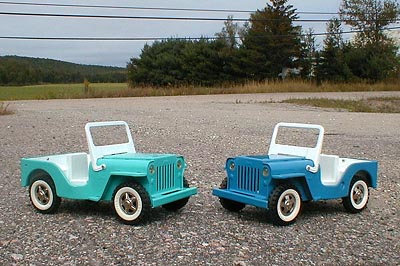 Doug says, "Here are two Canadian Tonkas. I've been working on theturquoise one since last winter. The blue one is one I pickedup in May from a lady who wanted to have some trees cut down on herproperty. It was sitting in the middle of a gravel driveway, pretty rough but restorable, and most importantly, Canadian!" 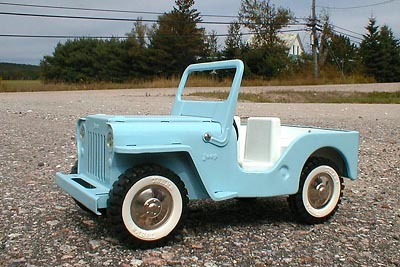 "This is a U.S. Tonka -- I think it's an early 1965 No. 200Jeep Dispatcher. This is really neat given that I was born in March of '65, and this and the wrecker were two Jeeps that I happened to stumble upon." 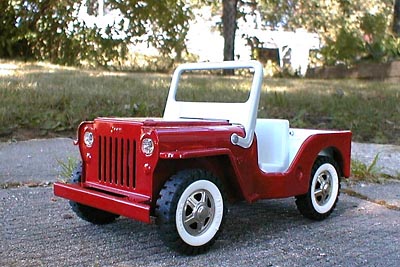 "I picked this up last September at the Stittsville flea market. The grille and bumper were pretty bent, also the windshield frame was alittle bent and the tub had been spread apart from the plastic insert. It had a lot of surface rust but fortunately no pitting. I had the red paint specially mixed to be an exact match to the original."
Thanks to Doug for the photos. -- Derek Redmond