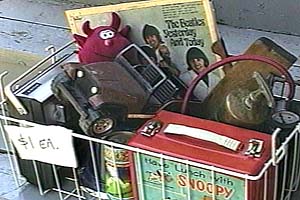 One of the things that keeps us stopping when we see those signs, is that every now and then we find a toy Jeep among the items for sale, and often it's a Tonka. (Check out the latest one I found -- the Enforcer.) Even if it's covered in rust, there's always a little devil telling us to save it from the junkyard. 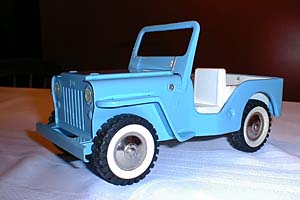 Doug Gagnon has been saving some Tonka flat-fenders that he's run across, and he finds some of the same problems faced in restoring full-size Jeeps.

"The blue one was a real mess," Doug says. "The body wasn't badly rusted but the bumper was badly bent, as was the windshield frame. The plastic seats were cracked and needed to be replaced. I also changed the hubcaps and replaced the steering wheel. After I had straightened everything out and rounded up the parts and cleaned them, I sent the Jeep out for a paint job." 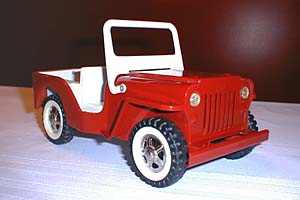 "The red Canadian Tonka wasn't too bad -- all it needed was new paint and new whitewalls." 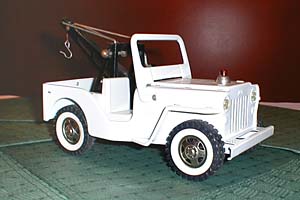 "I bought the white wrecker last April from an antique dealer about 5 minutes from where I live. It was pretty rough -- the bumper was bent, it was missing the left front fender and hood light, the hubcaps needed to be replaced and the tires were badly worn. Not to mention it needed to be repainted and the tow boom was missing (of course). As it is, the tow boom still needs to be repainted and I'm waiting for the decals, but it's a nice Jeep that was left for junk." 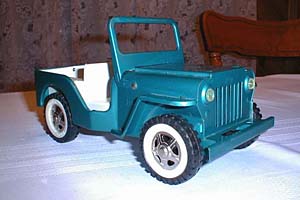 "This green one is in excellent original condition."

"I don't believe in restoring for the sake of restoring, but I hate to see a Jeep get trashed when it can be saved. For the most part, they are pretty easy to fix up, and look great when they are done, and I personally hate to trash any Jeep. I get more satisfaction saving a "wreck" than buying a nice one from a collector." --Doug Gagnon
Thanks to Doug for the photos. -- Derek Redmond