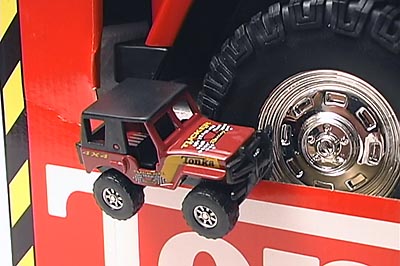 This small diecast flatfender (which originated as the Maisto "Ford GP" casting, a knockoff of the Matchbox flattie) has shown up during 2000-02 in several new paint jobs. They carry the Tonka name on the package (80K JPEG) as well as the model, but the Maisto name is still molded into the plastic base.

The Tucker Team Racing livery appears to have been dreamed up by a designer at Tonka (although there are in fact several different Tucker Racing teams in the U.S., running stock cars or motorcycles). The dark reddish-brown paint is a nice idea. 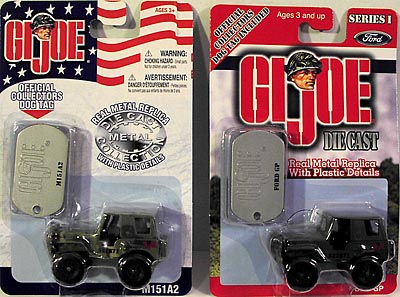 The Tonka name is now owned by Hasbro, who have worked the diecast flatfender into their "GI Joe" product line as well. Some versions still carry the "Ford GP" designation apparently adopted by Maisto to avoid copyright problems with Chrysler over use of the Jeep name and grille. Others are labelled "M151A2" on the dog tag and the card. It's not clear if this is simply a packaging mistake (since there is also a recognizable MUTT M151A (in tan or camo, with trailer) in the GI Joe diecast line.

Note: see more details on the Ford GPW and M151 MUTT on CJ3B.info. 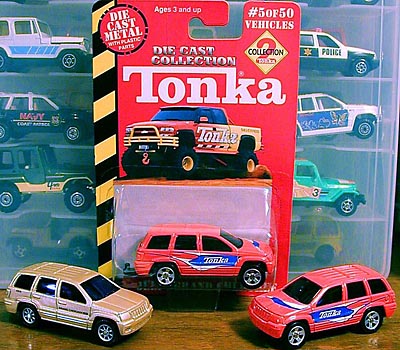 Another Maisto diecast being appropriated by Tonka is the WJ Grand Cherokee. Mike Albright photographed the 1/64 Maisto version (with treaded tires) alongside the Tonka (with smooth tires). Both are made in China. Royalties are apparently being paid for this one to DaimlerChrysler, who are credited on the bottom. 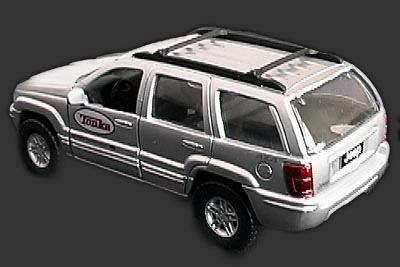 Meanwhile, the Maisto WJ in 1/42-scale also acquired a Tonka logo on its side in 2001. It's a nice model. with detailed wheels, rubber tires, and V8-powered rollback action. 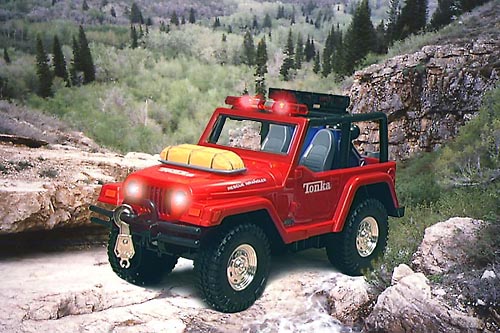 Big Tonka Jeeps are no longer just a thing of the past. The big wheel in the background of the Tucker Racing photo at the top of this page, belongs to the Tonka "Rescue Wrangler" (model 03746, made in China by Funrise). The 16-inch-long toy is one of several 2001 plastic Tonka rescue vehicles with forward and reverse drive, flashing lights, sound effects, and working front winch. The winch will come in handy if you already have one of those Barbie Jeeps with low ground clearance; see the winch in action (100K JPEG).

Just in time for Christmas 2002, came an even larger red Tonka (20K JPEG). Again built by Funrise, it's 1/6 scale (GIJoe size). As well as a winch, it includes working steering, detachable FM radio, and keyless remote to operate doors, lights and horn. 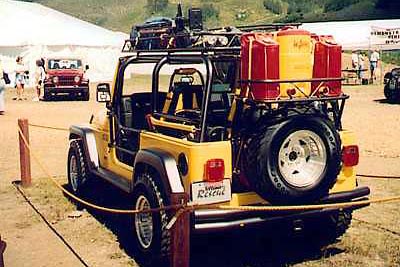