Pedal cars are great props for cute photos, and pedal Jeeps are no exception. I keep running across old pictures of kids and their Jeeps, so I thought I would archive some of them here. I don't know the original source or the date of most of the photos, but if anybody can provide credit or further information for any of them I would love to add it. 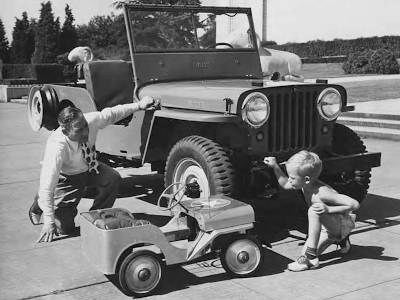 I do have some details on these first two photos. They were taken in 1947 to promote the new all-aluminum "Western Jeep" produced in Seattle by Western Toy Manufacturing Company. Seattle businessman Joe Wolfe brought his CJ-2A, and he's seen here with his grandson.

Bringing the full-size Jeep may not have been the best idea, since it tends to dominate the pictures. But it's interesting that the Western Jeep, rather than being a tiny reproduction of the 2A, actually anticipates the the high hood of the CJ-3B, which would be introduced by Willys-Overland five years later. Maybe this is where Willys engineers got the idea... 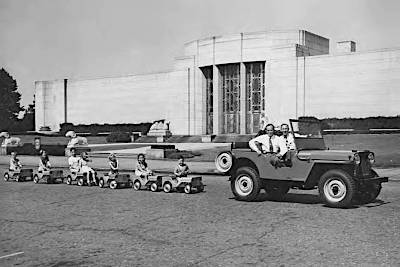 Aside from the missing spare tire, this is a good photo of Joe Woolfe and Bob Schaeffer (Chief Engineer at Western Toys) in the CJ-2A, in front of the Seattle Art Museum (now the Seattle Asian Art Museum.) It's not such a good look at the group of children sitting in their Western Jeeps. There could have been some closer shots of all those cute kids in their little high hood Jeeps; maybe they'll turn up somewhere.

These two photos are by Roger Dudley, from the Joe L. Woolfe photograph collection at the University of Washington. 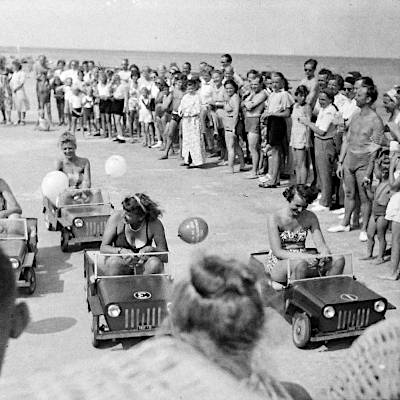 This fun event is a mystery both in terms of where the beach is located (I would guess somewhere in Europe) and what kind of pedal Jeeps are being raced. A distinctive feature is the short slot in the center of their front grilles. 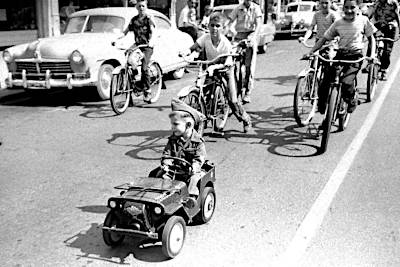 Here's an interesting one that appears to be somewhere in the U.S.A. in the 1950s. The Jeep is a Tri-ang, but modified with some larger wheels and what I think is a Briggs & Stratton lawnmower engine! 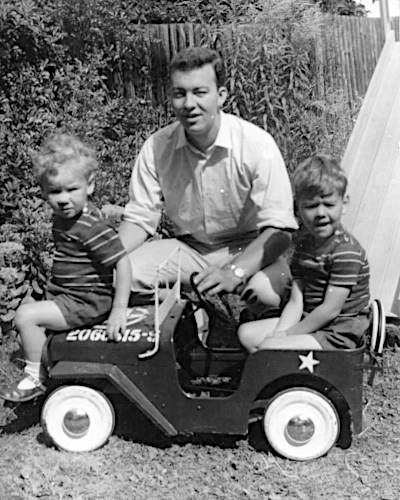 For comparison, here's the stock Tri-ang, in a nice family photo circa 1965. You can clearly see the very skinny Tri-ang rubber tire on the spare. Looks like the little jerry can that was beside the spare might already be lost. Thanks to Jo Gilbertson for this. 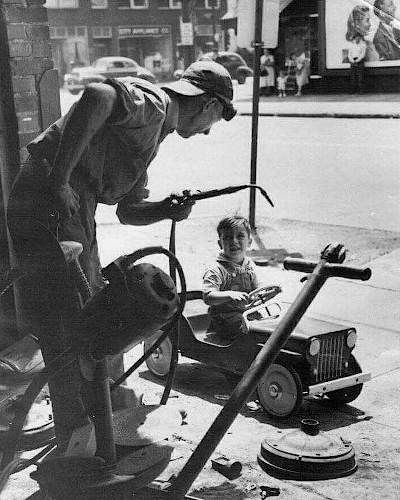 This young fellow in an early 1950s Sherwood seems a little uncertain about the offer of repairs from the mechanic with his torch. Nice photo, but I don't know any other details. 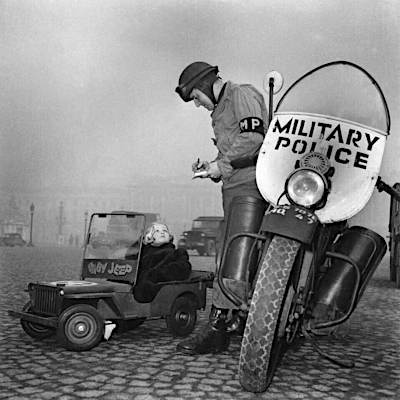 I'm guessing this beautifully staged shot was taken somewhere in Europe after the war; would the unit markings on the MP's motorcycle provide a clue? And I'm not sure about the origins of the realistic little "Baby Jeep" Willys MB -- maybe built from scratch in a motor pool? 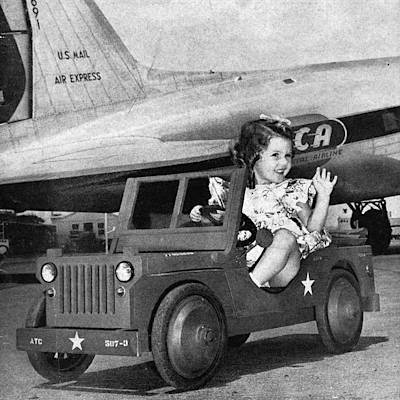 This one is definitely a custom-built toy and here's the story:

While in the Air Force during WWII, Herbert "Bud" Unger was a sheet metal worker for Pennsylvania Central Airlines in Virginia. In his spare time he built this jeep for his daughter Joy, and and she and the jeep were photographed for the cover of PCA News (130K JPEG) in November 1944.

Joy Unger provided this to Kustomrama for their biography of Bud Unger, who became a pioneering car customizer. Thanks to Federico Cavedo for finding it. 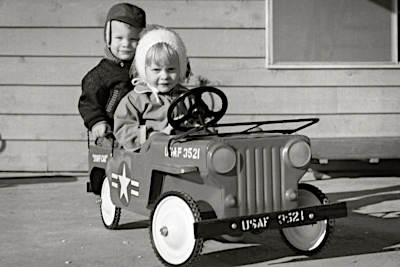 Speaking of the Air Force, this little sister and brother are having fun in their Hamilton USAF Jeep, perhaps the most popular pedal Jeep in the U.S. in the 1950s and 60s. But you don't see a lot of Hamiltons with the "Staff Car" marking seen here. 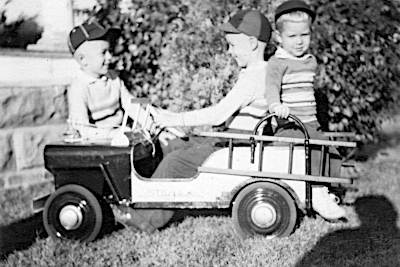 Like the Hamilton, the Steger Fire Patrol was built to carry a passenger on the back (although the Sherwood was best for that because it had a fire truck's rear step; see Pedal-Drive Fire Jeeps.) Here are the Dietrich brothers with their Steger, date and location unknown; judging from their caps they might be in the UK. 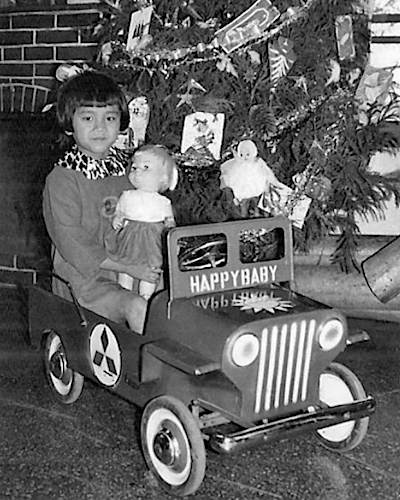 Finally, here's one that doesn't get seen in North America very often. With a Mitsubishi logo on the side, this pedal car is clearly based on the Mitsu CJ-3B. Variations of the high hood Jeep were built by Mitsubishi in Japan from 1953 through 1998, so it's hard to date this photo (except that it's Christmas.)

The two-pane windshield is a smart idea, giving it extra strength. Many flimsier toy windshields have been damaged or lost over the years.

Does anybody know who produced this toy? Thanks to Leif Hellstrom for sending the photo.


Do you have another pedal Jeep snapshot that would fit here? I would be glad to add it. -- Derek Redmond