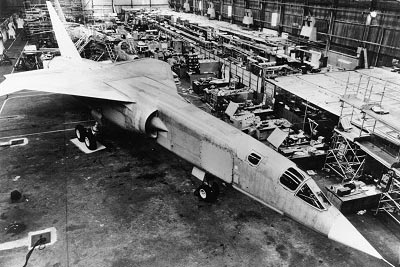 The 1960s was an era of exciting developments in Britain's Royal Air Force. The bombers of the RAF served as Britain's nuclear deterrent from 1961 until 1969, when that role was taken over by Royal Navy Polaris submarines. The VTOL (vertical takeoff and landing) Harrier was being developed and finally came into service in 1969. And 1964 saw the first flight of the TSR2 supersonic strike/reconnaissance aircraft (right) designed as a replacement for the Canberra bomber.

However, the highly advanced TSR2 project was cancelled in 1965 by the government, much as the earlier Avro Arrow had been cancelled in Canada, and by the end of the decade the RAF had bought Phantoms from the U.S. in place of the TSR2. 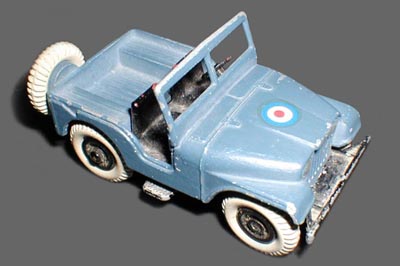 Matchbox didn't start selling diecast model airplanes until the early 1970's, but would it be surprising if they thought of capitalizing on the interest in military aviation in the sixties by putting some of their existing diecast vehicles in Royal Air Force livery?

Paul Willis in the UK has sent photos of a 1967 Matchbox No.72 Jeep which he has had for many years, painted in Air Force blue, with an RAF roundel decal on the bonnet (hood). He says, "I have also got an aircraft fuel tanker in the same livery." That tanker is likely the earlier No.73 Leyland RAF Refueller (40K JPEG) which was a 1959 Matchbox release. 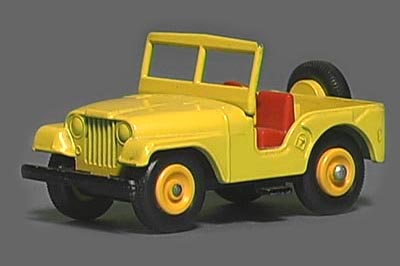 The conventional wisdom is that the No.72 Jeep, which represents an early Willys Motors CJ-5, was only sold in yellow (see The Matchbox Jeep Story). I haven't found a Matchbox or Jeep collector who is aware of Matchbox having released the Jeep in blue, so most people guess it must have been repainted by an RAF fan.

The website "Nick & Debbie's Lesney Matchbox Toy Collection" stated: "There were no variations on the Jeep. It was yellow with yellow wheels, black plastic tyres and a red interior. It was first made in 1966, converted to Superfast wheels in 1970 and deleted in 1972." 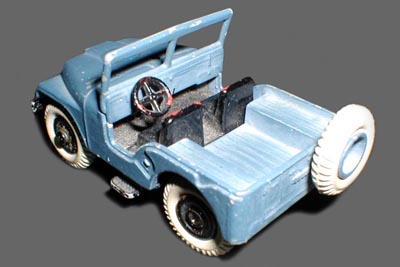 The plastic parts on this example have clearly been painted over the original colors. Paul says, "It seems that the wheels used to be yellow and the seats red, but the parts where the paint has chipped away from the main bodywork show that there is no undercoat, just plain metal."


Duncan McInnis was one member of the old Jeeptoys e-mail listserv who was willing to consider the possibility that the RAF Jeep was a limited run item from Matchbox. He wrote, "Have a look at the paint carefully. The blue paint is consistent even up under the wheel wells. Where it has chipped, there is no yellow under it. It also has the right consistency of paint thickness and application. The seats and wheels however, have obviously been painted. But who is to say that MBX didn't do this at one time as a special issue?" 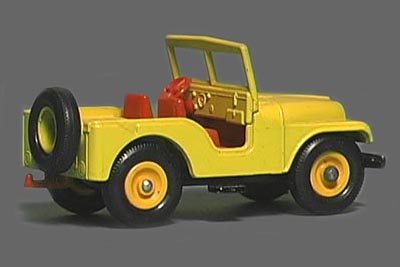 The grey tires are different from the black rubber normally found on the Jeep, and appear to represent a military non-directional tread design. They are also a better match with the grey plastic wheels on the earlier No.73 Leyland RAF Refueller.

The plastic trailer hitch has been broken off; red plastic is visible in the bottom view photo (below) where it had been attached. 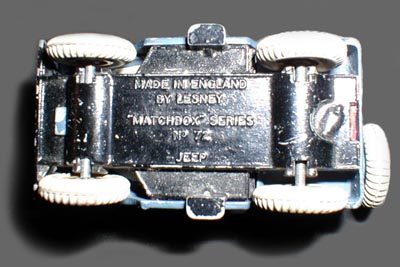 Also visible in the bottom view is a significant clue suggesting that the Jeep may have been dismantled for painting. The rivet that holds the body to the base behind the rear axle, has been replaced with what appears to be a small blob of solder, painted over.

Although not visible in the photo, Paul says, "Another thing of interest on the Jeep is that, if you look up through the wheel arches on the front, the underside of the bonnet is white."
Thanks to Paul Willis for the photos. -- Derek Redmond