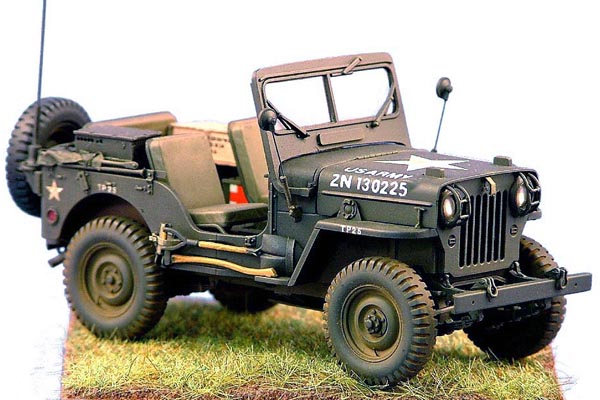 This beautiful kitbash by Jim Lewis represents the Mitsubishi CJ3B-J4 as used by the U.S. Army in Vietnam. Jim started with the 1/35-scale CJ3B-J4A kit from Okuno, and the engine and frame from the Skybow M38A1 kit (40K JPEG). 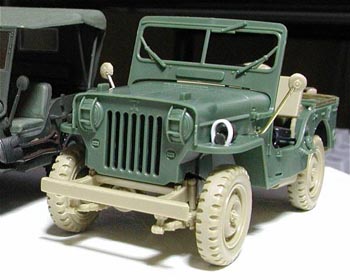 Early in 2004, Okuno of Japan released this 1/35th scale injection molded plastic kit (see the package, 50K JPEG) representing the CJ3B-J4A, built in Japan between about 1965-67. The J4A was an update of the J4 military Jeep which had been in production by Mitsubishi since about 1956.

The kit didn't become widely available in North America, but it's an inexpensive basis for a Willys CJ-3B or M606 model. 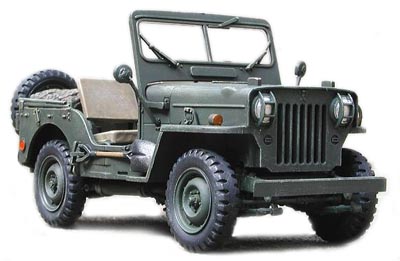 This example was nicely assembled and painted by a Japanese modeler for Okuno. See also the left side and interior (50K JPEG.) 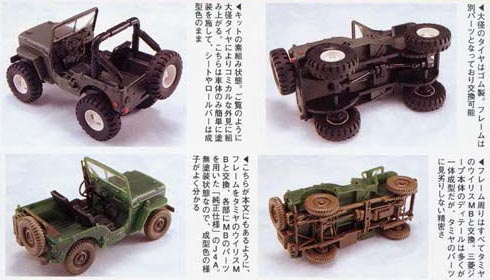 This clipping from a brochure (70K JPEG) shows the two versions which can be built with the parts included in the original Okuno kit -- the stock military version and a lifted surplus Jeep with rollbar and big tires.

Pete Harlem notes that "The Okuno kit I saw only has the off-road version in it. The regular running gear is not included as it is in the one on your website. There must be two releases, at least, of this model." 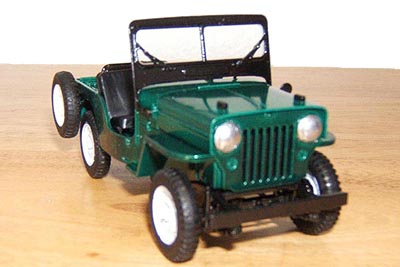 Dennis Decklever used a Tamiya Willys MB kit for the chassis and running gear of a model based on his own 1954 CJ-3B. He was originally thinking of using the F-head engine from the Skybow M38A1 kit, but thought he could do a "L" to "F" conversion cheaper than the $19 kit plus shipping. He modified the L-head engine to an F-head, and by not gluing down the hood (or the cowl to which it's attached) the engine is displayable.

Dennis used the rear seat from the MB, but the body is from the Okuno J4A, minus all the emblems and military moldings including the headlight guards. He framed up a tailgate from scratch and molded the ribs. 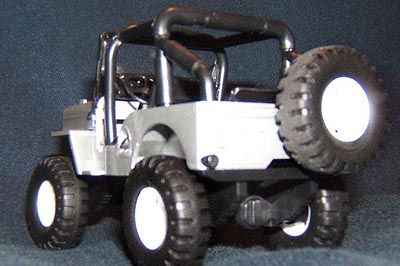 Dennis purchased a couple of the kits from Hobby Link Japan in 2005, and commented at the time that "it seems they are not selling many and only have one left."

He trimmed the military details off this one, but built it with the big tires and wheels included in the kit. See also a front view photo (70K JPEG). 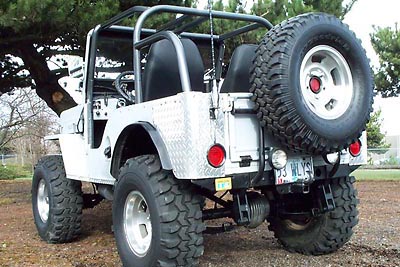 When the lifted model was finished, Dennis thought he had seen it somewhere before, and then he remembered Mike Kautzman's 1953 CJ-3B (right) on CJ3B.info. 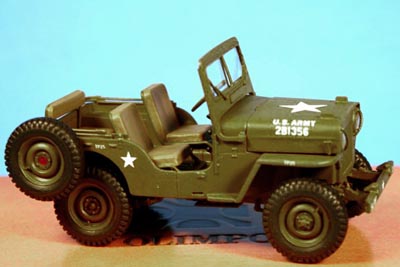 He started by shortening the chassis from a Skybow M38A1 (40K JPEG). 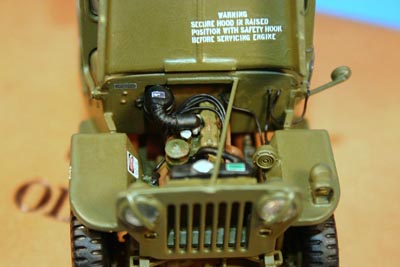 The rear body of the Okuno kit was modified by using a rear panel from the M38A1 and an Accurate Armour CJ-5 tailgate. It also has the engine from the M38A1 with many added and modified details including hoses, wiring, horn, battery and air cleaner.

Thanks to Roberto Flores and Morihisa Ochi, Heavy Arty at Armorama, and Jim Lewis of GunTruck Studios. -- Derek Redmond

See some other Mitsubishi and Mahindra Jeep Toys.