Those Hood Blocks Have a Purpose

Here in Canada we take our summer seriously, because it doesn't last all that long. But it is hot and humid, and nothing beats the heat like a good breeze.

There may be more important reasons that the Jeep windshield is built to fold down -- like clearing the line of fire for a machine gun, or clearing the line from the top of the roll bar to the front of the hood, in case of a rollover. But in the summer, one of the best reasons to fold down the windshield is to get a good breeze as you drive -- in your face, not up the back of your neck. 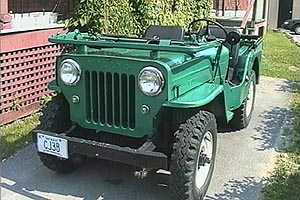 As was the case with most CJ-3Bs when they were originally sold, my Jeep doesn't have a roll bar. I would never suggest that anyone do any highway driving, or difficult off-road driving, without a roll bar. But around town or on flat backwoods trails, the feeling of driving above your whole vehicle, rather than inside it, is a great pleasure.

Secure the windshield down using a strap through the footman loops on the windshield and grille. When not in use, fold the strap back under the hood, over the little indentation in the top of the grille. 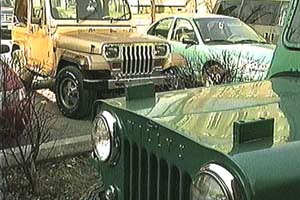 The purpose of the wooden blocks on the hoods of flat-fender Jeeps has been a mystery to lots of casual observers.

Newer Jeeps have a less-obtrusive pair of metal brackets on the hood to support the windshield. The majority of these Jeeps will never see their windshields down (especially since the YJ incorporated the windshield into a stock roll-cage design), but so far the folding windshield has continued to be a sacrosanct detail of Jeep tradition. 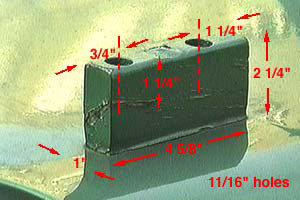 Oddly, the blocks on the high-hood Jeep seem to be higher than on other models. Here are the dimensions of the hood blocks on my 1959 CJ-3B. Note that some original examples from 1953-55 have been measured as 4"x1"x2". Like the windshield itself, the stock Willys wood blocks were generally painted black. Front is to the left in the photo.

For anybody with a repro hood with no holes for the blocks, Don in North Carolina measured them on his 1953 CJ-3B: "From the front edge of hood to center of front hole is 4 inches, to the next hole back is 6-5/8". Location of second hole might vary depending on hole in block if you are making some yourself, but the two front holes are in line with the center on the hood catches. The two holes for each block are at a right angle (90 degrees) from the front line of the hood. The front hole is 8" from the side of the hood, measured by letting a framing square lay over the side of the hood, parallel with the front of the hood and letting the part over the side touch the hood where it meets the fender. Careful, the hood catches are in the way."

John in Montana suggests, "For those among us who just want a functional 3B and not a restoration, the rubber FJ-40 hood blocks work very well."


A caution: Peirce Eichelberger in Pennsylvania says, "Do you know that I have been stopped by the local Police for driving my Jeep with the windshield down? Even though I've tried to explain to them that the Jeep is made that way!"

And hey, if you're driving with the windshield down, keep your mouth closed. -- Derek Redmond

Thanks to Roberto Flores for the cartoon at the top of this page.

Also on CJ3B.info, see some photos of me plowing snow with the windshield and soft top in place.