What would you do if you had the opportunity to take your old, beat-up hunting Jeep, and build your ideal CJ-3B? If you had the facilities and the expert assistance to put together the perfect combination of original, aftermarket, and custom-built parts, what would the result look like? Here's the story of how Ted Svitavsky answered that question. 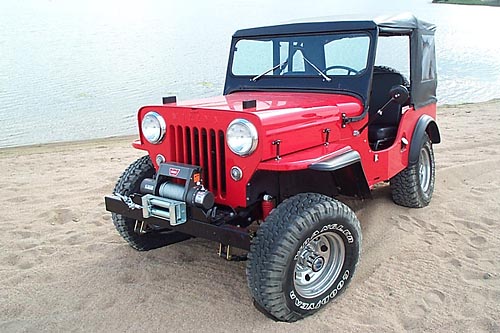 The 1953 Willys CJ-3B, serial number 453GB2 14543, was purchased by Ted in 1974 for $550, with a plow that had been used to clear snow in central Wisconsin. The plow was promptly removed and traded for a brake job. During the next seven years the 3B was used to go 4-wheeling, hunting, and fishing in northern Wisconsin and the Upper Peninsula of Michigan. Many an old logging trail was driven to a remote lake or stream, with a canoe strapped to the top of the full metal cab of the 3B.

At some point during that time the body was removed, to facilitate the replacement of floor boards and other rusted panels, and then reassembled. The front leaf springs were also replaced after Ted and his brother Jim "re-engineered" the front springs while crossing a farm meadow and hitting a well casing with the front axle of the 3B.

During that time the clutch and associated parts were replaced. Eventually, the fuel tank rusted through and began to leak, and the fuel pump started to fail. At the time Ted was working his way through college and money was scarce. A fuel tank from an old fishing boat was commandeered and the tank's primer bulb was used to assist the fuel pump when the engine would sputter.

The 3B was towed (it went less than 45 m.p.h. under its own power, too slow to drive it very far) to college by Ted and his buddies and then driven in the backwaters and through the bluffs near LaCrosse, Wisconsin along the Mississippi River. The 3B was able to hold its own with other CJ's in the '70's and often pulled newer Jeeps from the loony muck. What it lacked in power with the 4-cylinder overhead valve f-head engine, the 3B made up in low range with its 5.38 gears in the axles.

In 1981 Ted parked the 3B at his parents' cabin in northern Wisconsin while he was attending graduate school. For the next 20 years the 3B did not move and slowly sunk up to its axles in the loose sandy gravel. Trees grew up through the fenders and the 3B was surrounded by birch and spruce trees. Each year, when visiting his parents, Ted would try to start the 3B. The engine would turn over but never fire. The severe winters of northern Wisconsin took their toll on the Willys and what was not turned to rust was eaten by the mice.

Occasionally, when returning to the north woods, Ted would run into Larry Johnson. Larry owned a service station and was a terrific mechanic. He had done the brake job and replaced a clutch or two when working on the 3B in the 70's. When Larry was asked about rebuilding the 3B he would suggest that Ted go to New Mexico, find a 3B in good condition that had no rust, buy it and forget about a restoration project. Larry told Ted that rebuilding the 3B would take a lot of effort and would be expensive. But Ted had quite a few great memories of the 3B, and promised himself that someday he would see that it was rebuilt. Larry was usually right, and in this case was 100% right about the effort and expense of restoring the 3B.

The Jeep Comes to Colorado

In October of 2001, almost exactly 20 years after the 3B was parked, Ted drove from his home in Colorado to his parents cabin in Wisconsin, approximately 1,200 miles one way, with a flatbed trailer in tow. The trees were removed and the 3B pulled onto the trailer. Three of the four tires on the 3B had remained inflated over the 20 years that it had been parked. The 3B returned to Colorado, with one flat tire, and Ted recalled that this was the fastest the Jeep ever moved down the highway, being pulled on the trailer at 75 m.p.h. by his Duramax-powered GMC.

At the time, Ted was the President and C.E.O. of Agland, Incorporated, a large diverse farmer-owned cooperative. One of the company's businesses includes a shop that services cars, sport utility vehicles, and light and heavy duty trucks. The mechanics at the facility do a wide variety of work, from tune-ups to rebuilds of engines and transmissions. The company also repairs tires, sells a wide variety of tires, and does suspension work. All of the mechanics are 4-wheeling enthusiasts.

Ted dropped the trailer and 3B off at Agland's Greeley, Colorado facilities with the intention that the flat tire would either be replaced or repaired. Ted anticipated that over the next four or five years he would gradually try to rebuild the 3B. 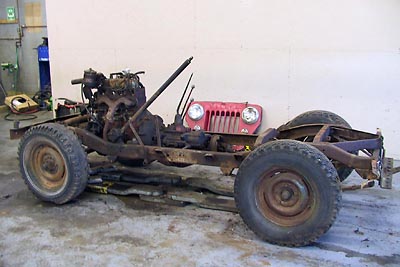 By the time Ted returned to check on the flat tire, the 3B's body, engine, and transfer case had been removed! So much for four or five years of gradual rebuilding! The guys had gotten a bit ahead of Ted.

A meeting was called and executive decision made to continue rebuilding the Willys. What followed was a complete ground-up restoration of the 3B in approximately 6 months. 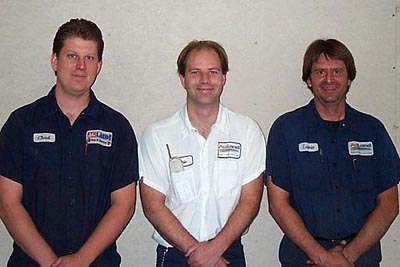 The rebuilding plan, engineering, fabrication and assembly would be chaired by Chris Miller, a Jeep enthusiast and Agland's Service Manager. Assistance in fabrication and assembly would come from Chad McMillen and Lonnie Helton, mechanics at Agland's facilities. Encouragement and occasional assistance would come from other employees at the facility. Ted would supply the deep pockets necessary to pay for the project along with "administrative" advice. Commitments were made to keep the 3B as authentic as reasonably possible and to make several modifications to the Jeep to enhance functionality. The team went to work. 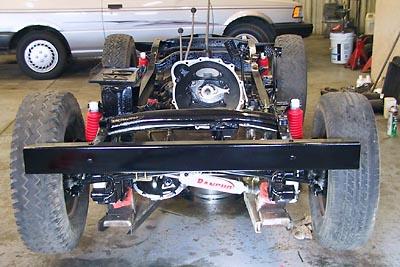 The frame was power washed numerous times, and then sent out for sandblasting and painting. The axles were taken apart, inspected, and bearings and seals replaced. All steering components were replaced, and lockout hubs added to the front axle. The drive shafts had seen better days and were also rebuilt and new U-joints installed. The entire brake system was replaced including brakes, wheel and master cylinders, brake lines and hoses. 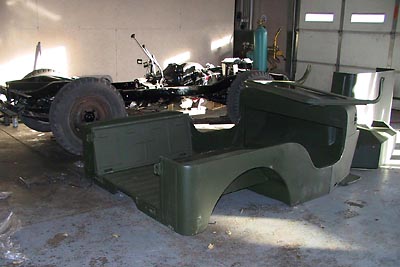 A fiberglass body was considered but for authenticity a metal body was desired. After searching the World Wide Web a "reproduction" body was purchased from Kaiser-Willys Auto Supply. The body had been manufactured in the Philippines, transported to the U.S.A., and then eventually to Agland's shop in Greeley. The body arrived in pretty good shape with only one or two dings which the shipping company agreed to pay to have fixed. It included two fenders, a metal tub, a tailgate and a windshield frame.

On the original body, the hood, front grille, and tailgate had "Willys" stamped in the metal. The original front grille (70K JPEG) was salvaged and is the only body part with the "Willys" insignia now on the 3B. Gaskets for the windshield glass, underneath the windshield frame, and the tool box located under the passenger's seat in the tub, were also purchased and a new metal fuel tank and associated hardware and sending unit were installed. The body is a "close" replica and quite a bit of fitting had to take place.

The only small part the guys could not find to purchase were the rubber plugs in the body tub on the driver's and passenger's side that were removable and that allow water to drain out. They were able to remove the plugs from the original body tub but the plugs were in bad shape. With some help from the guys at Agland's Bandag retread shop, and some rubber, the plugs were manufactured. Also, instead of using blocks of wood on top of the hood for the windshield to rest on, blocks of rubber were manufactured.

A template was made from the original body for the speedometer and gauges. All holes were drilled in the body and frame and all components were assembled. The body of the 3B was then taken completely apart and sent out to be painted. The primer on the body from the manufacturer was poorly done and chipped easily. All of the original primer on the body parts was removed by sand blasting. 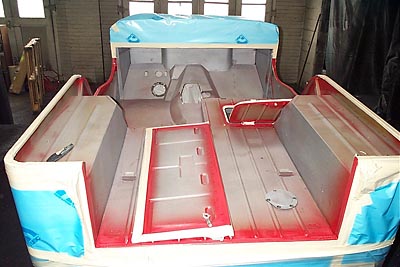 A black coating of Amerigard was applied on the underside of the tub and inside and outside of the fenders (30K JPEG), and a red coating of Amerigard was applied to the inside of the tub, after carefully masking the exterior paint (60K JPEG). The coating is also used for spray-on bed liners, and the color is matched to the rest of the 3B. The hope is that by using the coating that the metal will be better protected from nicks and scratches and that it will not rust. The Amerigard was then clear coated to assist in keeping the dirt and grease off the material. 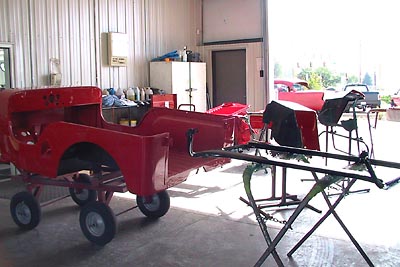 The remaining unpainted parts of the body were then primed, and several coats of BMW bright red paint (70K JPEG) were applied, with final coats of clear coat. 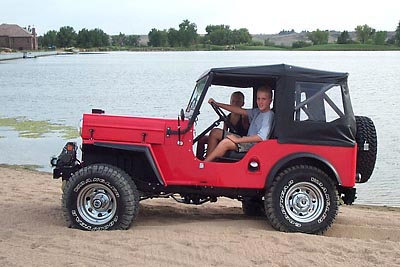 About the time the body was being mounted to the frame, Ted recalled the 3B's performance and went back to the World Wide Web to see what could be done to improve the 3B's top end speed when on the road.

Larger tires were part of the solution. The lift is a 1" Rancho lift over stock. Goodyear Wrangler 31-inch tires were installed on chrome steel wheels, and are seen here with Ted's sons Doug, age 12 and Greg, age 9, in the Jeep. These wheels will be perfect for romps in the Colorado mountains, the Utah desert and an occasional return trip to Wisconsin. They are quite a bit taller than what Ted ran in the 70's, and will increase on-road speed. They are also wider, so fender flares were purchased from Bushwhacker to help protect the custom red paint job.

Ted was still concerned about the 3B's top end; he recalled driving the 3B downhill in the 70's at 45 m.p.h. with the engine revving high, and wondering when engine components were going to come through the hood. The guys were hoping the 3B would be able to travel down the road at 60 m.p.h. and wanted to keep the engine's RPM's near 3,000 at those speeds. 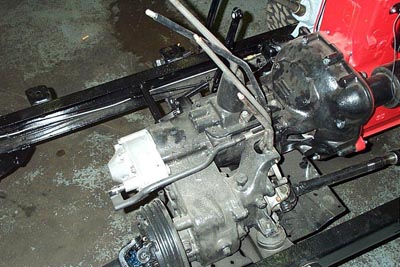 A Saturn overdrive from Advance Adapters was ordered and installed, and the 3B now travels comfortably at 60 m.p.h. Installation of the overdrive required some additional sheet metal fabrication of the replica tub and shifter covers (100K JPEG). Rubber boots no longer fit the shift levers so leather boots were manufactured.

With the overdrive and by using the high and low ranges in the transfer case, the 3B has 12 forward gears and 4 reverse, an improvement over the stock 6 forward and 2 reverse. Though the 3B is now capable of greater speeds, it is expected that the Willys will be trailered when traveling any distance. It is not expected that the 3B will be towed using a tow hitch, due to the issues surrounding towing an early model Jeep.

Thanks to Ted for the story and photos. -- Derek Redmond

Continue to Part 2 of the story, where Ted and the guys decide whether to replace the cracked engine with another F-head, or swap in a V-6 or V-8.