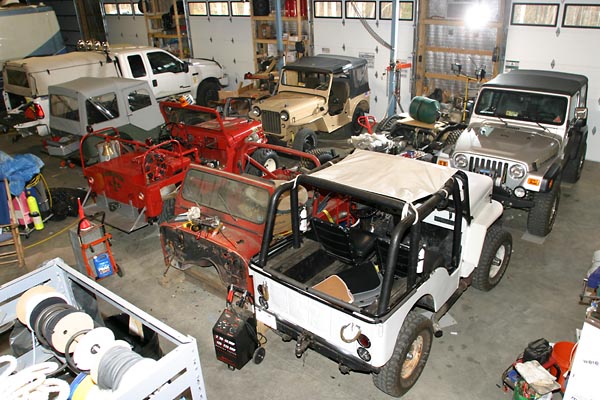 Ed Spigle says he is "mostly retired" from several engineering businesses he worked for. This gives him quite a bit of time to work in his impressive garage on a collection of Jeeps that includes three very interesting CJ-3Bs. 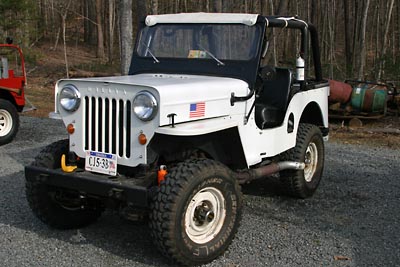 "The white one is a CJ-5, sort of -- it has a '61 CJ-5 frame (this is where the VIN # is from), '74 running gear and a '57 3B body. It is an interesting Jeep, fun to drive and work on. The engine is an AMC 304 bored 60 over and a fairly radical cam. It has headers with straight pipes. The lift is done with sections of a drive shaft cut to 3 inches. The firewall is totally custom fabricated. The steering wheel is from some small car. I have been continuing the project as there were a few problems when I bought it from a guy in PA, Shawn Duvo, who had put it together." 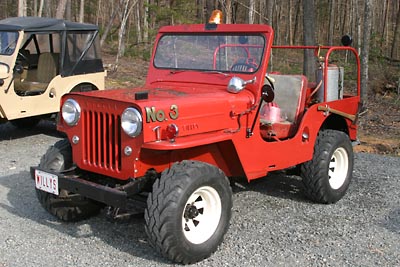 "The red one is a 1959 fire Jeep that was originally owned by a fire company in Lexington, Minnesota. It has a water tank in the rear and a hose reel, along with lights and a platform in back (90K JPEG) for firemen to ride on. It has only 4248 miles on it.

"The clear plastic panel in the dash (80K JPEG) was where the 2-way radios had been. Everything works including the Gorman Rupp pump with a 3 HP Briggs engine, mounted on the passenger-side floor. I put a cigarette lighter plug under the dash for the light."

Note: as of 2020 this Jeep has been sold to fire truck collector Rob Squicciarini. 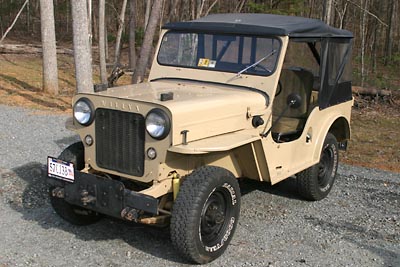 "The beige one is a 1957 that was supposed to have originally belonged tothe Civil Air Patrol. It has well-made running boards added, and a skid plate on the front protecting the steering and differential. It has 22,000 originalmiles. I have this one licensed for everyday road use." 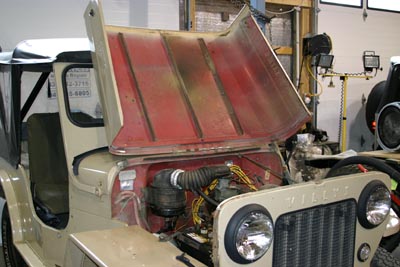 "It was painted red as can be seen in the engine compartment. I believe that the bracing is so that people could stand on the hood while they serviced aircraft. The running boards/fender flairs (40K JPEG) may have been so that people could easily ride or climb on the Jeep. I think these must have been for ease of climbing on the Jeep by people servicing aircraft or riding to an aircraft. Still trying to find out for certain."

"Back to the garage. It is truly a dream garage. We've named it Building 8 (110K JPEG) or my 'toy house'. My wife sends me there during the day to keep me out of her hair (oh rats!) I also have welding equipment, lathe and milling machine (90K JPEG), along with a BIG stereo system for the building."

Thanks to Ed for the story and photos. He says maybe we can have a CJ-3B reunion at his place one of these days. See also his CJ-3Bs posing with his Rubicon (120K JPEG). -- Derek Redmond

Last updated 31 May 2020 by Derek Redmond redmond@cj3b.info
https://cj3b.info/Owners/Spigle.html
All content not credited and previously copyright, is copyright Derek Redmond