Hurricane With a Silver Lining

In North America, CJ-3B owners often assume that high performance from their Jeep will mean swapping in a 6-cylinder or even V-8 engine. But many places in the world, anything other than a diesel engine is considered uneconomical, and larger gasoline engines are not a real option. Keeping and tuning the original "Hurricane" 4-banger is the only practical way of optimizing performance. 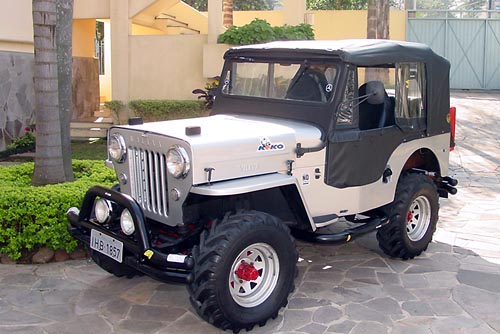 In some cases, the Hurricane has been mated to a new transmission: for a higher ratio (see Marcel Vilas' Fast and Flashy '55), or for a lower ratio (Doug Wilson's Hurricane on the Trails). But this Jeep owned by Thovar Lemos in Brazil has the stock drivetrain which gives it just a bit of both.

Thovar bought this 1954 CJ-3B, serial number 454GB2 30495, in May 2001. Based on information from CJ-3B Serial and Engine Numbers, Thovar's Jeep appears to be one of perhaps several hundred consecutive CJ-3Bs exported to South America in 1954. 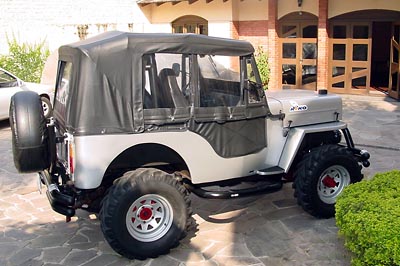 Thovar comments, "I installed a roof of synthetic canvas made in Brasil by Cowlings Gaucho. The front and back shock absorbers, the side steps, bumpers, tailgate rack and gas can, are all made by Keko Accessories, a company specialized in the manufacture of this type of accessories. The wheels are old Ford steel wheels, and the tires called 'Frontieira' are manufactured in a city nearby where I live in Brasil." 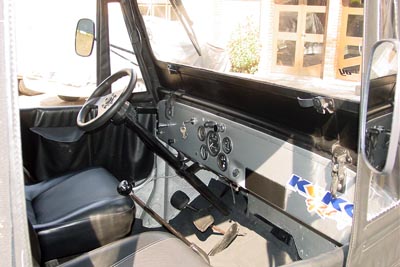 The dash is stock, but there's full carpeting, bucket seats and a smaller steering wheel. An air cleaner manifold (see more below) takes up the space where the heater would be. There's also a roll bar and rear seat -- see a side view (100K JPEG) with the top partly open. 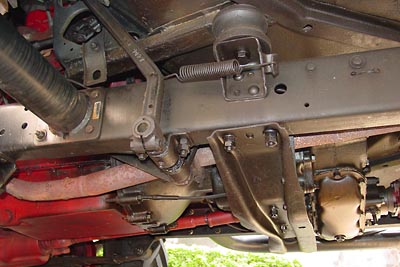 A couple of surprises are lurking behind that silver exterior. Take a look underneath and you'll find more silver, as well as a big splash of red under the hood, where Thovar has painted the engine from top to bottom. 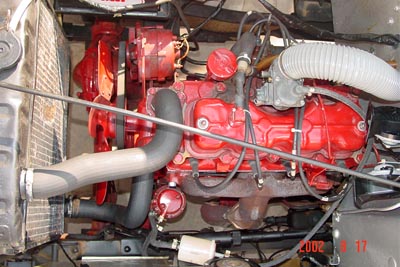 One of the problems Jeepers in Brazil have with the F-head is keeping it cool. Thovar's solution is to draw air through the firewall. A right side photo (100K JPEG) gives a better look at the hose, and the space opened up by taking out the oil bath air cleaner. See also a left side photo (100K JPEG) of the clean and neat engine compartment.

Thanks to Thovar for the photos. -- Derek Redmond

There is a very active four-wheel-drive scene in Brazil, with off-road racing particularly popular. See also Jeeps in Brasil on CJ3B.info.