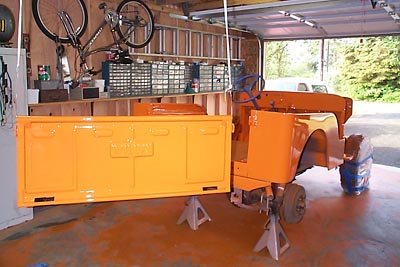 "Being an old Mopar nut from way back, my color of choice was Vitamin C Orange. (See also the fenders being painted, 80K JPEG). The WILLYS script for the tailgate came from a old unrepairable gate, but I wasn't brave enough to weld it in upside down as I had read about someone doing on CJ3B.info -- lol. All the work done was done by me and my son -- lots of welding, grinding, stretching and shrinking, to end up with a straight, holeless tub." 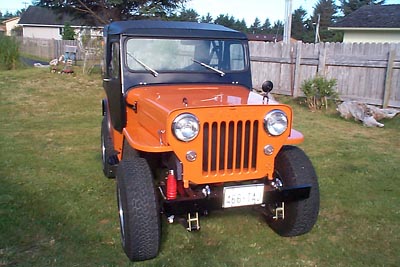 "I picked up the 1953 CJ-3B from my brother-in-law for free. Well, almost free -- I had to make a trip to central California and bring it home to Washington.

"It's built to suit me. Close to stock, cept with the useful things I like -- heater, 11-inch brakes, overdrive, lifted a bit, and a top to keep out that Washington rain." 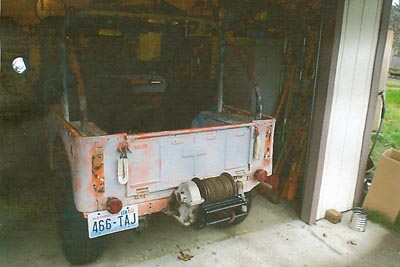 "As you can see from the before pics, it had been ridden hard and put up wet. The between work involved removing everything connected to the tub. Fenders had been welded on with one being over an inch different in height (literally welded to tub and grill -- what a mess to remove.) Tub was rust-free (just surface rust) but full of hundreds of holes -- thank god for a MIG welder)." 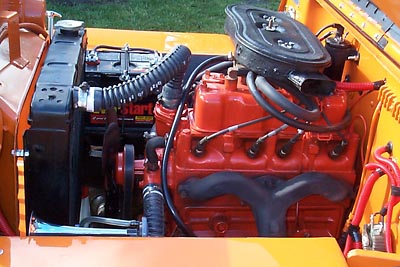 "Bro was going to install a Commando V6 (which he also gave me) but I decided to check out the 4 first (110K JPEG), finding all excellent but valve lash set way too tight, causing the engine to run crummy. On further exam I found the block had been decked, making serial numbers almost impossible to read and compression had been bumped up. I didn't rework the power train, as it ran well and some things had already been reworked (Saginaw steering, etc.) I replaced all mounts, welting, etc., using all stainless fasteners from top to bottom. Air cleaner is a Subaru reworked (cause I had one.)" 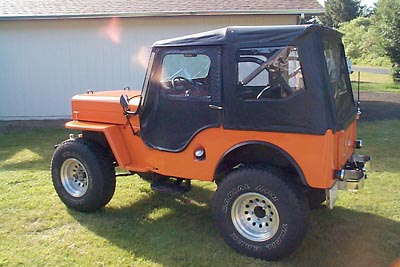 "It has Warn hubs and Warn overdrive, also 11-inch brakes. The brakes were a mess -- broken/missing springs, backwards shoes, frozen cylinders. Brake lines were copper tubing (gasp). The new taillights are from Beachwood -- they're the only ones that carry those neat stainless round lights." 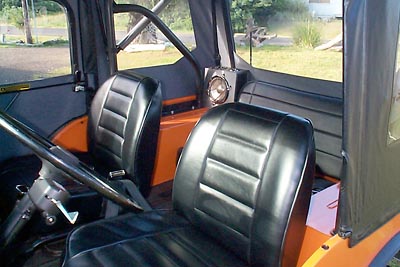 "The top is a BestTop, and the seats from Outland are mounted on the stock frames revamped a bit (they can be changed back to stock at some later date).

"The early Chev heater (90K JPEG) worked great. I revamped and mounted it up under the dash; it's barely visible now (100K JPEG)." 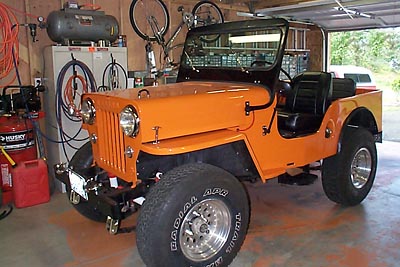 "Almost finished assembly. A comment on wheels and tires; I didn't want really wide things sticking out, but something in between. My choice was 9.50 x 33 on 8-inch wheels, which gets by with no front flares, and small reworked rear flares. Vintage Jeep Parts supplied the flares, shocks, etc. and are the most helpful people you will find. And yes, one (maybe more) of the sales reps has a 3B high hood -- he went out and measured his several times as I was deciding on lift, tire clearance etc."
"CJ3B.info was very helpful in finding parts, and I used the links well. Quadratec kept me in a great supply of catalogs as well as reasonable parts such as the shackles. Last but not least, let's don't forget JC Whitney -- buy a 10-cent item from them and you have catalogs forever."

Thanks to Rick for the photos and info. Due to having back surgery, Rick sold the Jeep in early 2006 to Terry Tevis in Northern California. -- Derek Redmond