Close Encounters of the 3B Kind

Jeeps in Close Encounters of the Third Kind and Contact

"From all around the globe, fragments of unprecedented but seemingly unconnected events swirl through the ether. In the remote Mojave desert, scoured by the bitter, gritty wind, Claude Lacombe (François Truffaut) and his team of scientists hope to be the first men to understand the enigma. With the words of a half-crazed eyewitness ringing in their ears, the dust parts to reveal numerous WWII vintage planes. The odd thing is that they're in pristine condition, ready to start at the touch of a button, and that their ID numbers match those of a squadron which disappeared fifty years earlier." ( Damian Cannon, in Movie Reviews UK)

In the first shot of that opening scene of Close Encounters of the Third Kind (1977), the scientists arrive in a Land Rover. Later, and probably more realistically, their team races into Dharamsala in northern India, in a Mahindra CJ-3B Jeep (right).

These scenes, very different in visual style from the Indiana and Wyoming sequences that make up most of the rest of the story, add to the impressive texture and scope of this early Steven Spielberg film. 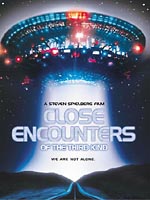 From Walter Frith's review in the Internet Movie Database:

"Richard Dreyfuss stars in 'Close Encounters' as a working man from Indiana who is confronted on a dark road one evening by an alien space ship. As the film develops Dreyfuss becomes obsessed with the meaning of his encounter....

"Throughout the course of the film there is a constant theme of preparation for an alien visit as two men (Bob Balaban and the late Francois Truffaut), supposedly two scientists with government connections, travel to places including Mexico and India to follow up with people who have had an alien encounter of some sort. There is the development of language and communication, as hand signals and musical riffs are used to make contact with the extra-terrestrials who will surface in the film's hypnotic climax set at Devil's Tower in Wyoming."

By the way, when the government shows up at Devil's Tower, an M38A1 is in the thick of the action.

Walter Frith concludes: "With eight Oscar nominations and one win for the searing cinematography by veteran cameraman Vilmos Zsigmond, Close Encounters of the Third Kind is definitely one of Spielberg's finest films."

Thanks to M.L. Griffith for spotting the CJ-3B. -- Derek Redmond 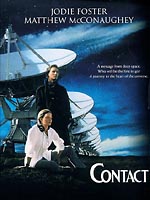 Contact  (1997, directed by Robert Zemeckis) has elements in common with Close Encounters, but concentrates more closely on the scientist (Dr. Ellie Arroway, played by Jodie Foster) who makes the first contact with another world.

A review by astronomer Dr. Peter R. Backus at the Filmscouts web site says: "It isn't suprising that the science in Contact is fairly accurate. Carl Sagan was actively involved in the making of the movie. Scientists from the SETI Institute provided technical advice (and props). The real surprise is how well the movie captures the excitement, frustration, romance, and inspiration of scientific exploration. SETI is one of the few science projects dealing directly with one of the great questions: "are we alone?". It is a question that we all understand. The answer to that question would have an impact on all of us.

"When presenting a complex story involving science and technology, it is inevitable that some accuracy will be sacrificed for the sake of the art. Contact is no exception, but unlike most, it stays well within the bounds of artistic license."

Apparently the small fleet of red Jeeps is an accurate detail of the Arecibo radio telescope observatory in Puerto Rico, and they're seen parked in the background as Dr. David Drumlin (played by Tom Skerritt) arrives there early in the film. Although most appear to be CJ-7s, John Hubbard was sharp-eyed enough to notice that one of the Jeeps (just behind Tom Skerritt's hat in this shot) is indeed a CJ-3B.
Unfortunately, we don't get to see it in action, so this is just another brief "contact" with a CJ-3B in the movies.

Thanks to the Internet Movie Cars Database for frame enlargements. -- Derek Redmond